Something new again. Dived into another heavy ship project. This is my first serious large ship since the Sobek Dreadnought (the finished version of which was released almost a year ago; and I don't count that abandoned Orcinus cruiser as a serious project anymore).

It will be around 400m long, with ample turret firepower, and maybe a fighter fleet carried in internal hangar spaces. Tried to reproduce my Lobster Frigate's armor plating style for the nose, and already made some new 90,000-DPS cannon turrets (shown in the last image).

The screenshots below represent its first four days of construction progress; colors only temporary. Wish me luck, cause I sure as hell don't want to end up losing all ambition again, cause I think this start is already good enough that it would deserve completing.

Thanks! :D I tried my best. Here's some more progress on it:


Since the last update, I managed to enclose the hull. Did a repaint and started microdetailing. I still have a long way to go with microdetails, still might change colors, and still have to build the engines. I also have to find a new name for it, because a quick search has revealed that there are already at least three other "Ulysses" ships on the Dock (latinised version of "Odysseus").

Nonetheless, construction is progressing good. It already has 17 units of a 600-DPS anti-missile turret mounted all around. 7 units of a 90,000-DPS machine gun turret (six on the ship's underside, one on the top way back). An artillery cannon turret atop, which can fire two 1,800,000-damage projectiles every 15 seconds. Plus six onboard weapon outputs.

Might swap the weapons in some of the ventral heavy turrets to beams, and who knows, if the QuickFire config gets officially implemented, I might have to drastically redesign the systems of each of these three types of turrets. Anyways, focus is on the hull for now, after which I'll proceed to interior design

I absolutely love your build style, the attention to detail is astounding. Keep up the amazing work!

Keptick said:
I absolutely love your build style, the attention to detail is astounding. Keep up the amazing work!
Click to expand...

You keep up the amazing work too, I've seen that you resumed on your famous titan's thread, I'll keep an eye on it
Reactions: Keptick

Traditional reposting of a CC upload, try it out in-game for the ultimate experience: Brimstone-L7 Advanced Salvager

Also, I'm planning to try myself at building a small fleet of uniformly styled ships, my first attempt at a purpose-built fleet (inspired by a new video of Tshara, as on many previous occasions). 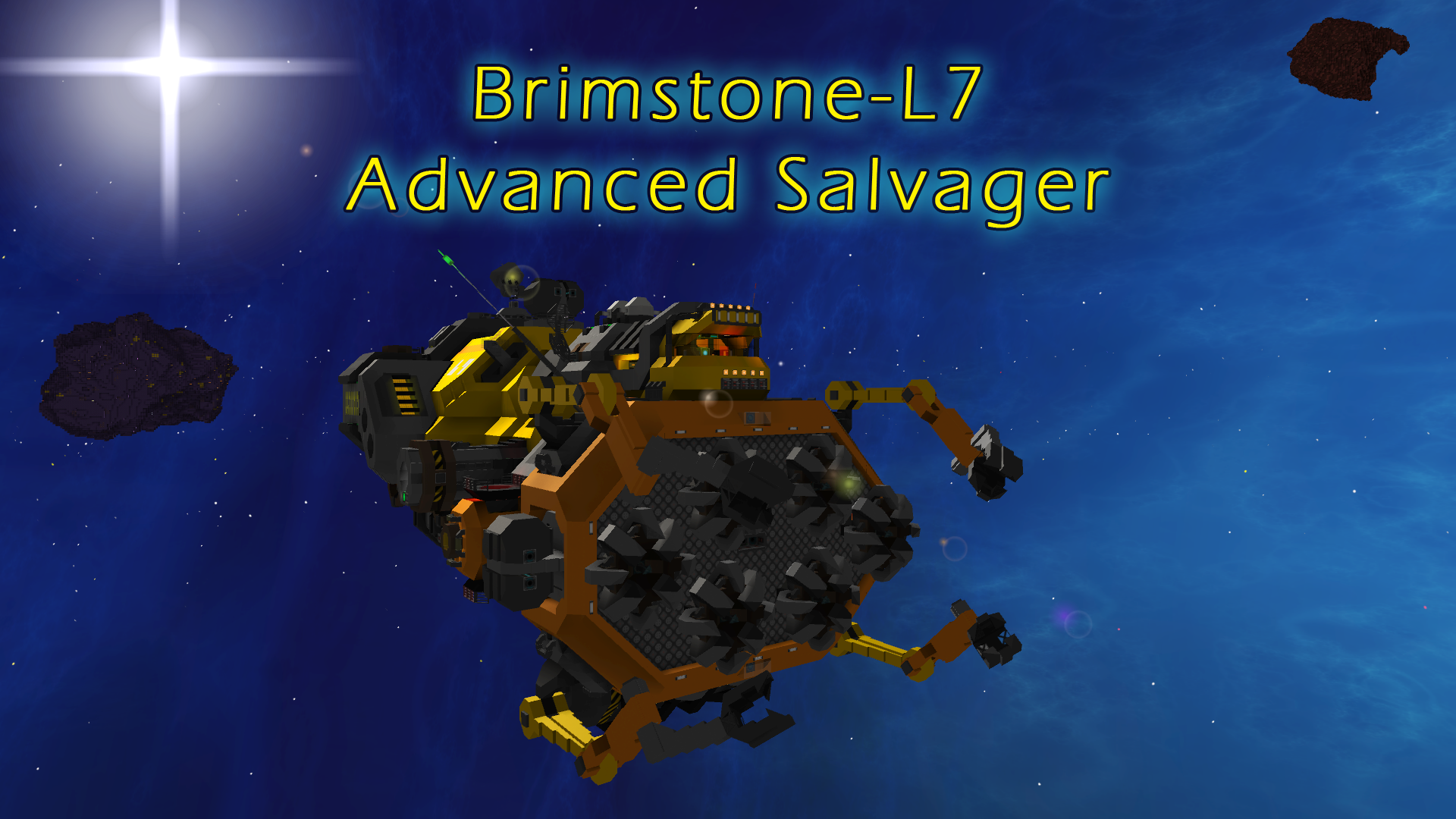 Not anything relating to either of my last few promises of what I was going to work on, but that's only natural over here, I guess... Spontaneity and inspiration go hand-in-hand.

I'd want to have something gorgeous for some tests with layered armor. I also intend to try to properly system it, then, once finished, release it for public use, in both filled and shell form, for those who wish to conduct their tests in style too.

(And yay for the new forum software, you can now select and upload multiple images simultaneously!)

Resumed work on this yesterday, after a long holiday season break.

The hull, at least its surface layer (still needs some advanced armor lining inside later), can be considered finished, with the exception of turrets (still have to do some R&D on what counts as a decent medium-sized turret in QF configs).

Also decided to call it the "Geezer-class frigate" ...Blame Liam-foken-Gallagher from Oasis for recently introducing me to some funny british slang, love that geezer.

Finished and published the recently spotlighted project, you can get both the systemed and the shell versions (links link to download pages).


To say something more useful too, you can make yourself the kind of showcase GIFs shown below by doing this:

First off, shout-out for the new 0.202.86 release version and everyone responsible for it! Systems in StarMade have finally solidified!

(Remember the start of this epoch in which everything we built, we built with the promise of having to refit or completely redesign them later? There was the "waiting for new power", "waiting for new weapons", and the most recent "waiting for new configs" thing. Could it really be that we won't have any more of that?!)


So I started working on my entry to the latest creative challenge of this storyline-based design competition.

It's meant to be a factory station featuring, at a minimum, facilities to unload mining ships, and to process raw materials into end products.

(First I made a 1:5 scale miniature model, then started translating it into full scale with an older, never-before-used, 5x5x5 framework building template set of mine. The model is docked to the real deal, so that I can just jump from one to the other, using the entity-switch key, whenever something needs to be measured or double-checked. I highly recommend this construction technique, works like a charm.)

Day 3 (or maybe 4, IDK) of construction of my new factory station has seen great progress.

Since it's one of those "floating landmass" type of stations, it first needed a giant platform (parted into three separate islands in this case) which is all done.

Made the framework profiles for the two warpgates, installed a unit of my logic-animated radio telescope patent, and built the large freighter loading shipyard.

The "visual noise" produced by all those dense, zig-zaggy girders, when viewed from a distance, kinda hurts my eyes, but I believe that will be remedied once the buildings are put in place (and limit viewing distance from any given angle), which is next on the list. Colors subject to change. Current dimensions: ~750 wide/long and ~150 tall.

That satellite dish can move. It will be really impressive if you can logic it to just a simple button press to rotate it in any of the directions you want.
Reactions: Criss and DeepspaceMechanic

Tshara said:
That satellite dish can move. It will be really impressive if you can logic it to just a simple button press to rotate it in any of the directions you want.
Click to expand...

That would be a nice logic challenge, thanks for the suggestion! I will keep it in mind for the time when the station will be in a state that is appropriate for wiring stuff up.

Eventful times... I'm currently at the midpoint of two weeks of mandatory home isolation, despite being healthy (well, physically, at least).

I finally found the time to pirate down and listen through whole discographies of the naughtiest rock bands of the 70s, 80s and 90s. Yesterday was Guns N' Roses day, which inspired the building of some engines with ATTITUDE for my recently renamed "Watatsumi-class battlecruiser".

(As told before, its originally chosen "Ulysses" name turned out to be in use already by several other CC ships... Anyways, being the latinized version of Odysseus, such a name would better suit some exploration vessel which engages in combat out of necessity, instead of duty.)

Also built the shells of the buildings of the more recent focus of this thread. But this was all done right after what was shown last time, and no progress since. I'm starting to fear that this will turn out to be one of those stations (the classic DeepspaceMechanic left-to-rot station that rapidly became as much of an unbearable grind, as much fun it was to build in its early stages). Have I underestimated the mega-scale yet again?!

I'm really liking the station! I personally love seeing a miniature model getting scaled up to full size and taking shape.
Reactions: DeepspaceMechanic

I'm glad you like them. They are kinda problematic though. I had to make sure that they can't jump into action and start moving around while they are still inside their holes (by wiring up their AI modules to wireless blocks that activate only when the turrets are fully elevated).

Criss said:
I'm really liking the station! I personally love seeing a miniature model getting scaled up to full size and taking shape.
Click to expand...

Hey Criss, long time no see. Yeah, there's something nice in the process of scaling up miniatures.

Problem is, this particular station in its current state is too close of a reproduction of the model. Stuff on such a large scale would need much more structural complexity to feel real, and to achieve that I'd need to build way more armor plating and greeble than what I'm looking forward to.

Finally finished and published this mega-project that I started in August 2019.

You can also check out its humble beginnings in this post.

DeepspaceMechanic said:
I'm planning to try myself at building a small fleet of uniformly styled ships, my first attempt at a purpose-built fleet.
Click to expand...

Wrote that in October of last year... I intended to take a break after the release of the battlecruiser one post above, but this just happened. These screenshots represent the first 3 days of progress:

The fleet is planned to include:

I started with the Command Flagship. All the rest should be more relaxed undertakings.

It's 255m long. Already has a heavy continuous beam turret on the bottom, plus a heavy basic cannon turret atop. Still have to reshape the nose, etc.