🛈 Requires the Resources ReSourced mod to function. It is recommended that you familiarize yourself with that mod first.

🛈 Please note that this is a very early beta release, and some issues are to be expected.

Building upon the resource mechanics introduced by Resources ReSourced, The Bastion Initiative is a project designed to enable meaningful station defense and territory control in StarMade. In addition to adding two powerful new defense chambers, the mod allows you to utilize your stockpiles of renewable resources to fortify your assets and infrastructure with potent defensive Aegis Systems.

So long as you can provide the necessary fuel and firepower to ward off would-be attackers, your once-endless woes of torn-up warpgates, ransacked refineries, hollowed-out harvesting facilities, and trashed trading posts may be a thing of the past.

There are two new chambers available:
Both of these chambers are only available on stationary structures.

The Bastion Initiative adds one new resource: Castellium Condensate. This resource cannot currently be mined or extracted by any conventional means, but is instead created in the Castellium Centrifuge. 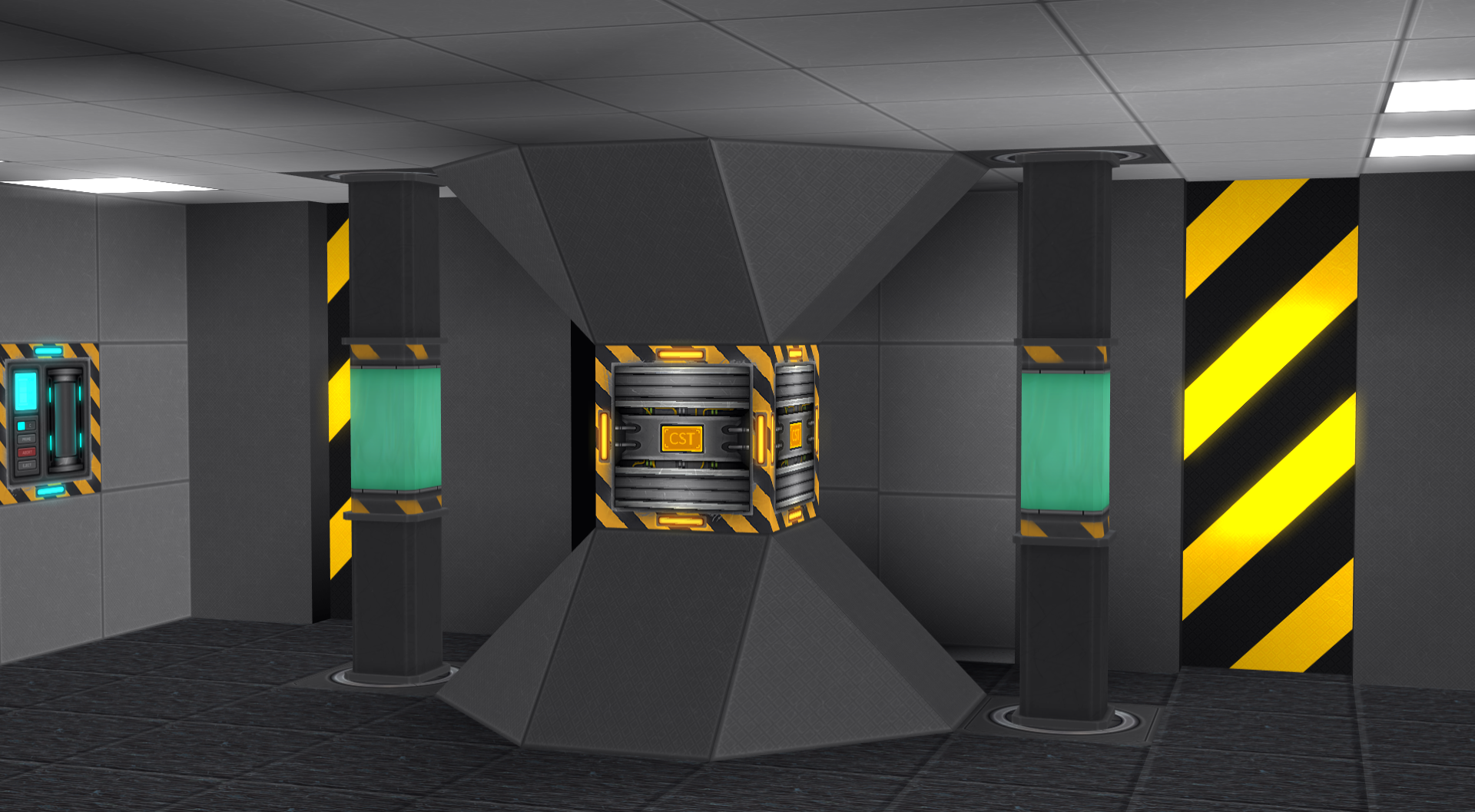 The Castellium Centrifuge produces Castellium Condensate from Anbaric Vapor, Parsyne Plasma, or Thermyn Amalgam - the three strictly passive-harvested resources introduced by RRS. Both the raw and capsule forms of these resources can be processed into Castellium.

Once obtained, Castellium Condensate must be refined into capsules in the Capsule Refinery, just like any other resource. Castellium Capsules can then be used to produce Aegis Cells, which function as the fuel for your defensive systems.

The Bastion Initiative also adds one more Component to the manufacturing tree. Field-Stabilized Canisters, made from Macetine, Ferron, and Parsyne capsules, are used in the creation of Aegis Cells as well as many of the blocks introduced by the mod.

The defining feature of The Bastion Initiative is the Aegis System. Aegis Systems utilize Aegis Cells to enact powerful defensive functions for your structures.

An Aegis System consists of an Aegis Core connected to a number of Aegis Subsystems which provide different functionalities. The Aegis Core must also be connected to a storage in order to provide Aegis Cells to power it. (The core will convert Aegis Cells into Aegis Charge, which will be consumed even when unloaded.) 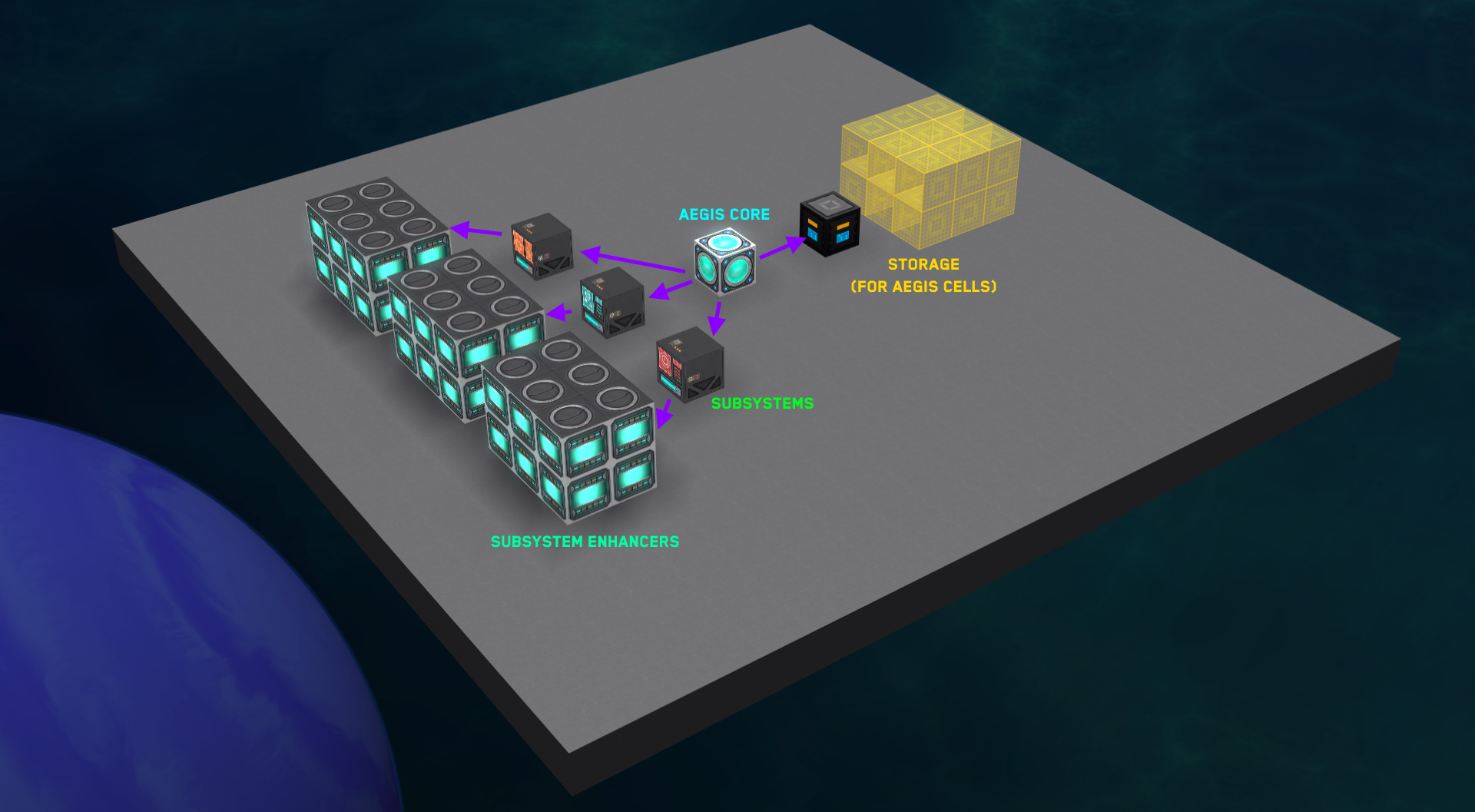 As of release v0.1 "de Vauban", there are three types of Aegis Subsystem available:
Check the descriptions of each Subsystem block in the shop panel, or consult the Glossar in-game wiki using the !glossar command, for more information.
More subsystems will be added at a later date.

You can link Aegis Subsystem Enhancers to an Aegis Subsystem block to enhance its functionality. For instance, Stealth Interruption Subsystems gain more range when enhancers are added.

Disruption Datalinks and the Recalibration Timer

The Disruption Datalink is a counter to the invulnerability provided by the Bastion Field subsystem.
It is a beam which is capable of "disrupting" any Aegis System with a Bastion Field equipped, causing the structure to become vulnerable to damage for a certain period of time.

A prospective attacker can Disrupt an Aegis System at any time, however the vulnerability window will only occur at the next "recalibration period", which is a window of time every day that is set by the structure owner. (There is a cooldown on how frequently the window can be changed to prevent abuse.)

When an attacker successfully Disrupts a station, notifications are sent to the owning and attacking factions, informing them of when the vulnerability period will be. (For now, all times are in GMT. This may be amended later.)

Larger Disruption Datalinks can Disrupt a larger structure faster, however there is a maximum rate at which any given structure can be disrupted, and a larger Datalink consumes Aegis Cells at a higher rate.
Reactions: Nauvran and mektek