Utvita said:
Hey! Good work on the transformers and modular add ons to your ship but I feel that the turrets on the turret section are too large and bulky and don't fit the sleek original design on your ship. Perhaps you could look at flatter turrets or build a larger ship to accommodate the turrets!
Cheers ^^
Click to expand...

Thanks for sure, and I agree that the turrets are bulky but it is intended to be a turret-boat that sacrifices some style for (hopefully)PvP suitability. The turret section provides the turrets with 2mil e/sec to share and they need to be big enough to house the modules required to take advantage of that. That said, a version with flatter, better-looking turrets employing overdrive is a good idea for a PvE version since I am already modifying this one to be more PvP viable.

Added angled antenna. Totally worth it. Cut the turrets down in size, module count suffered too much so added additional barrels to pack some modules back on despite impinging a bit more on the top turrets' field of fire. DPS and block damage greatly reduced as expected but they look a bit better. I say we take off and m/p the entire plate from orbit. 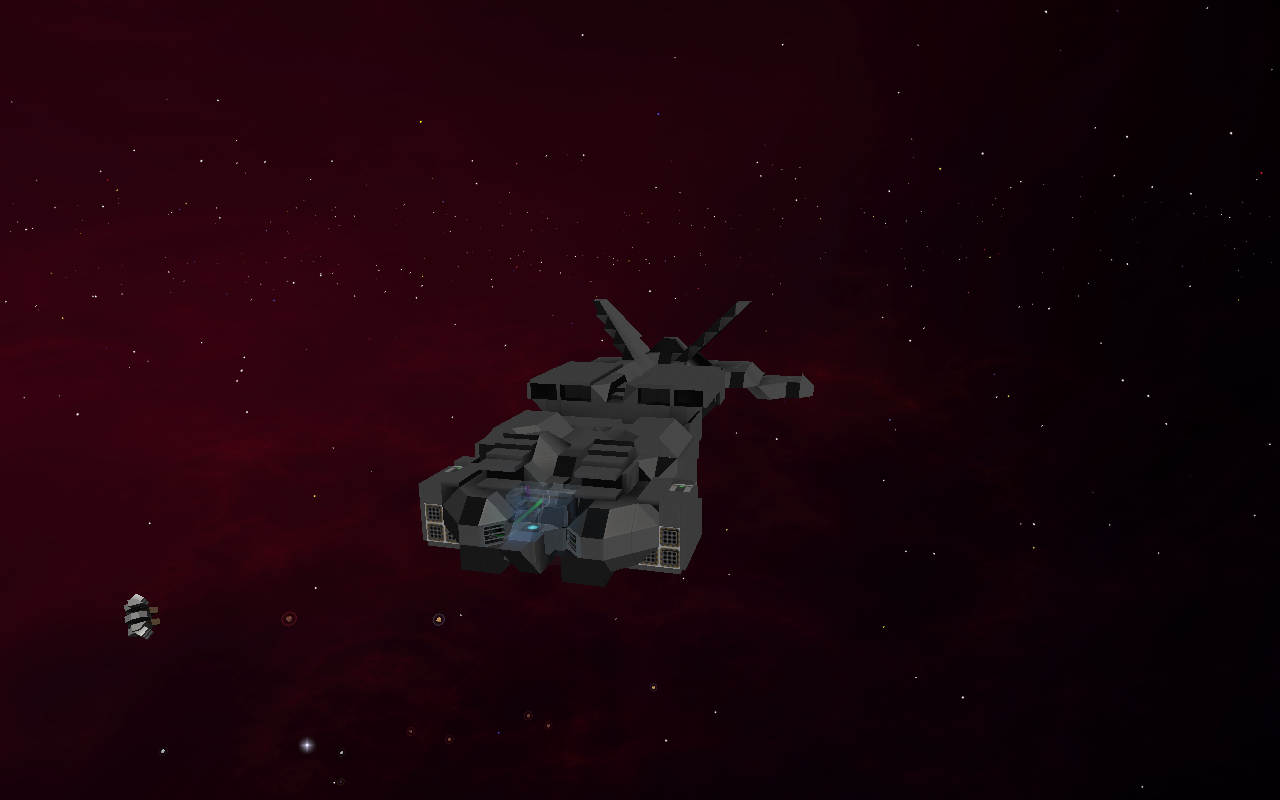 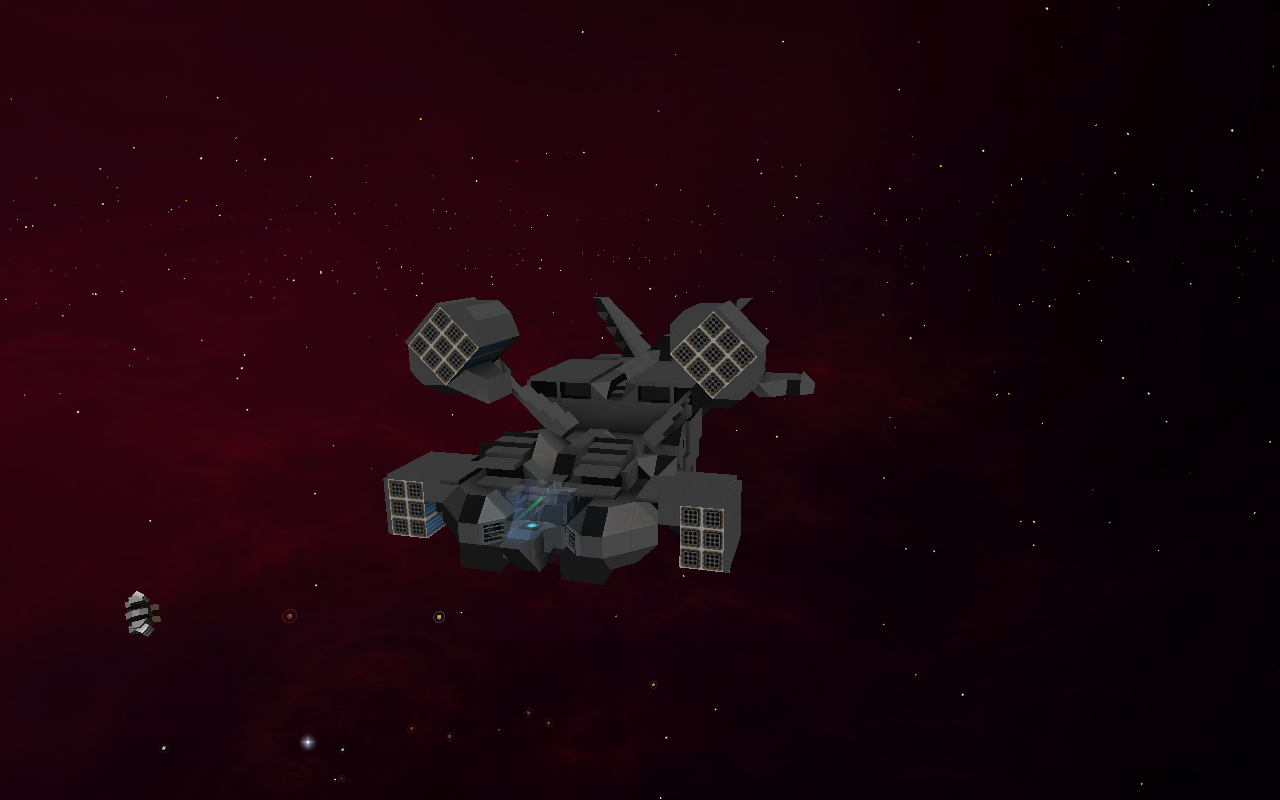 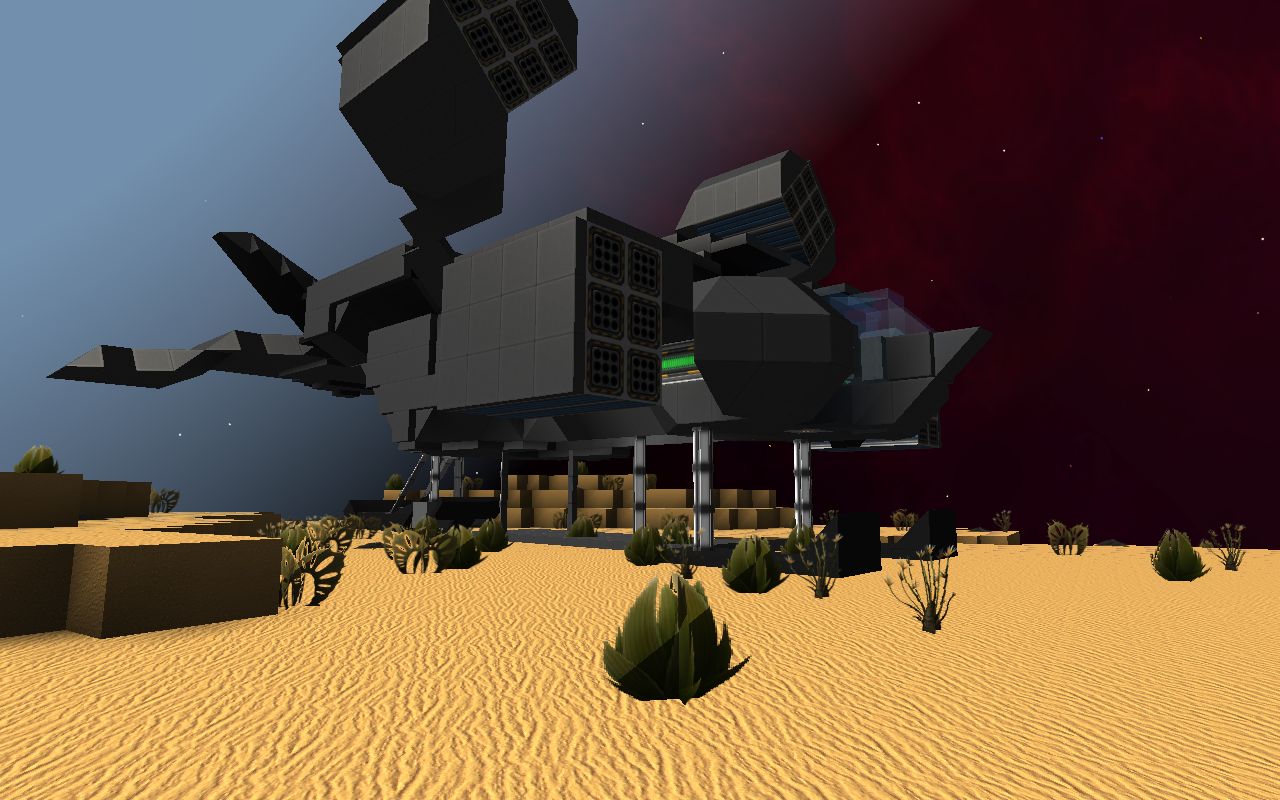 I like the landing gear and ramp. Nicely done!
Reactions: Crashmaster 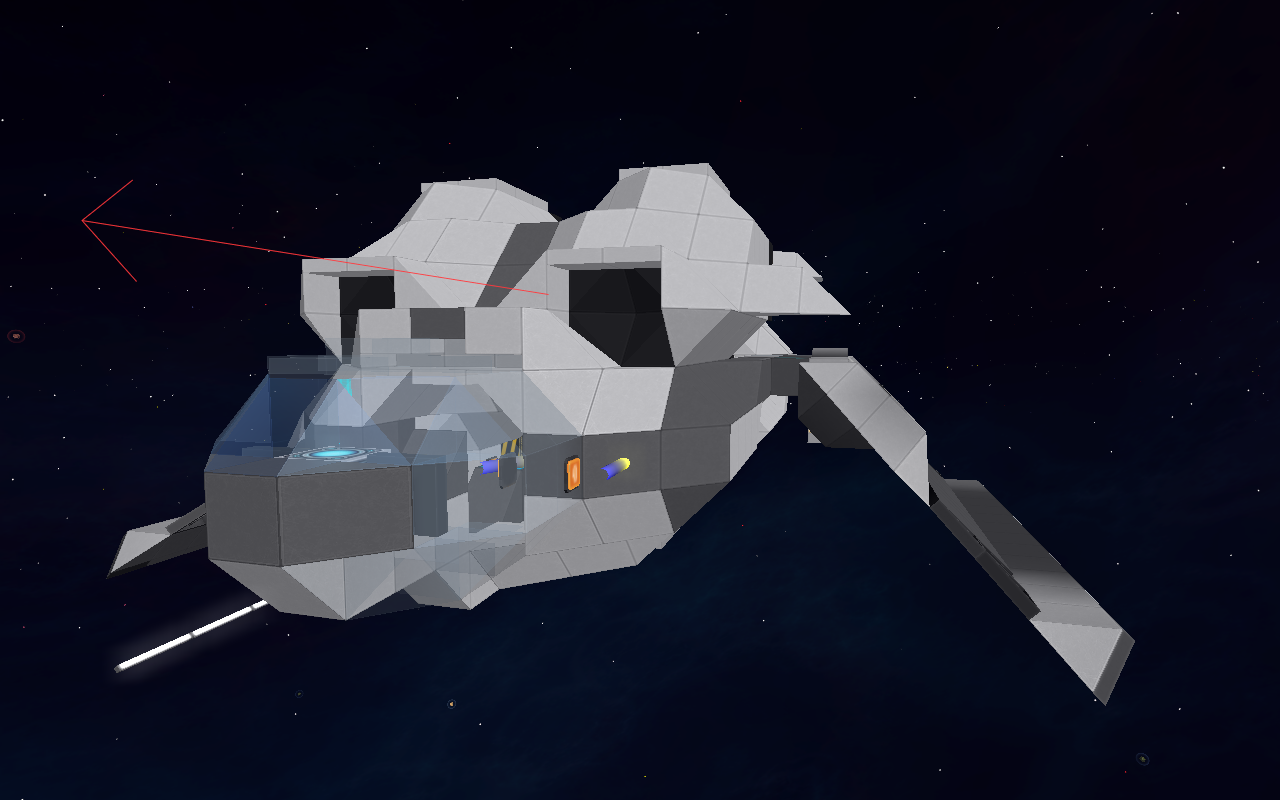 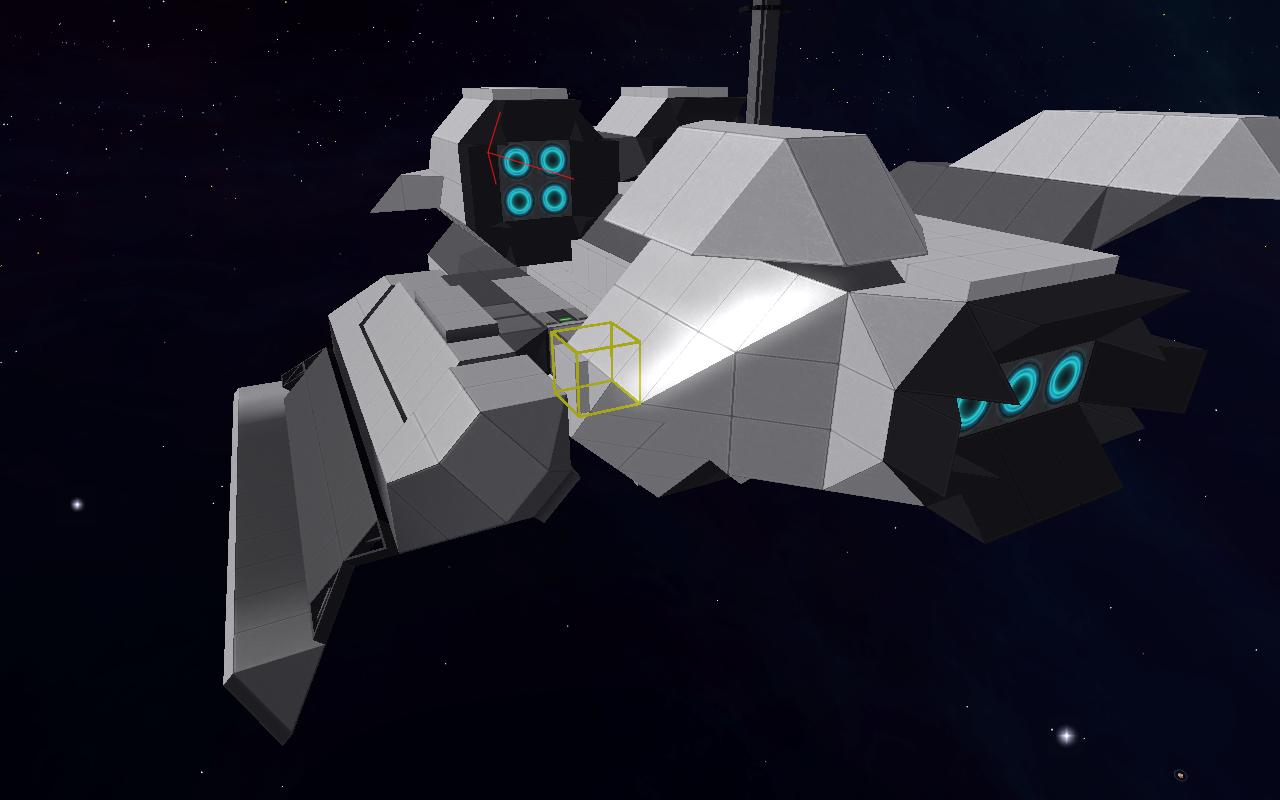 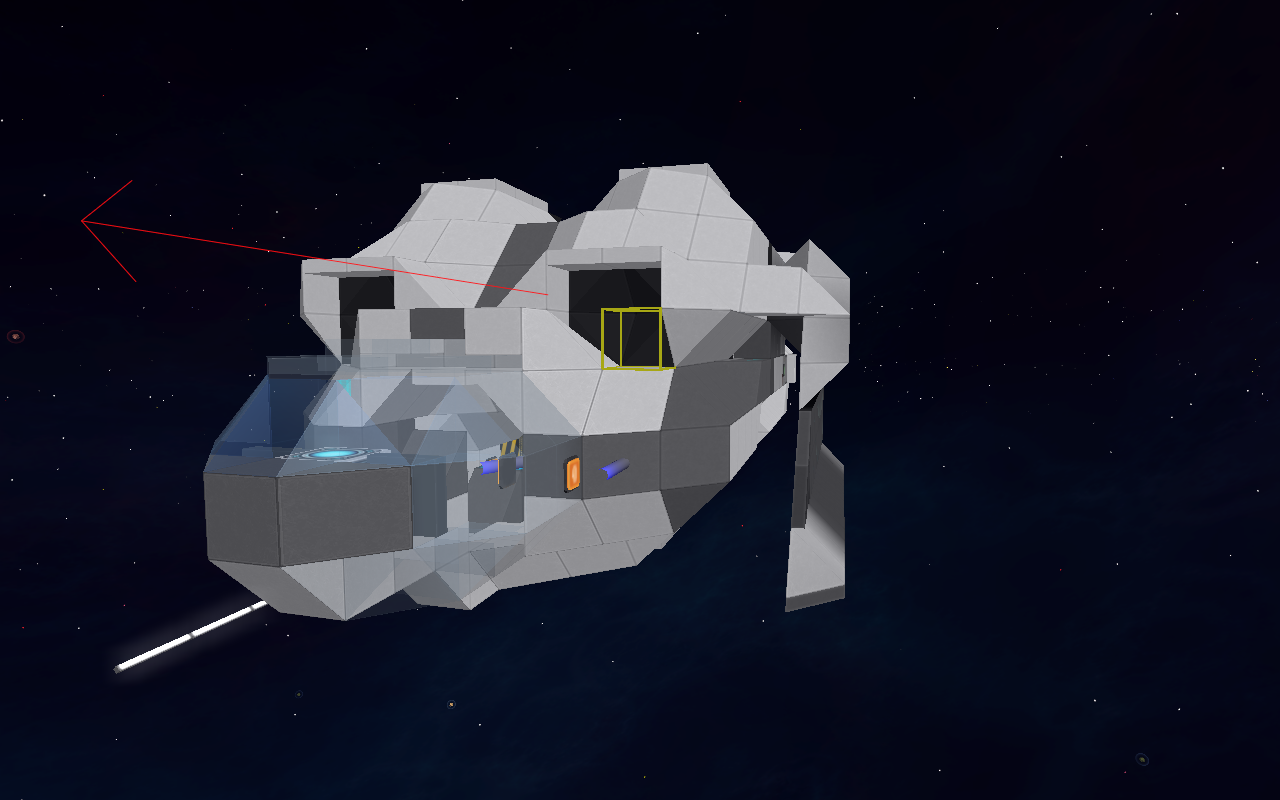 Or deploy as landing skids; 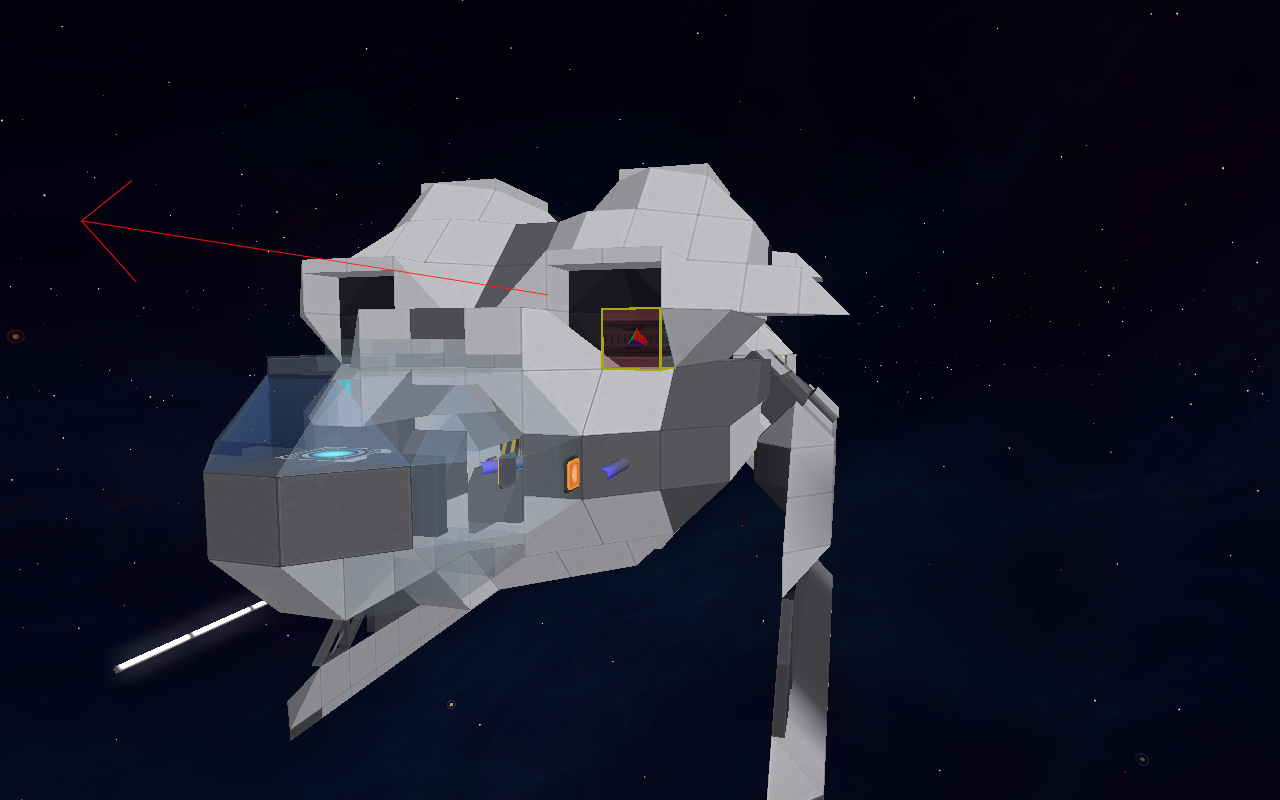 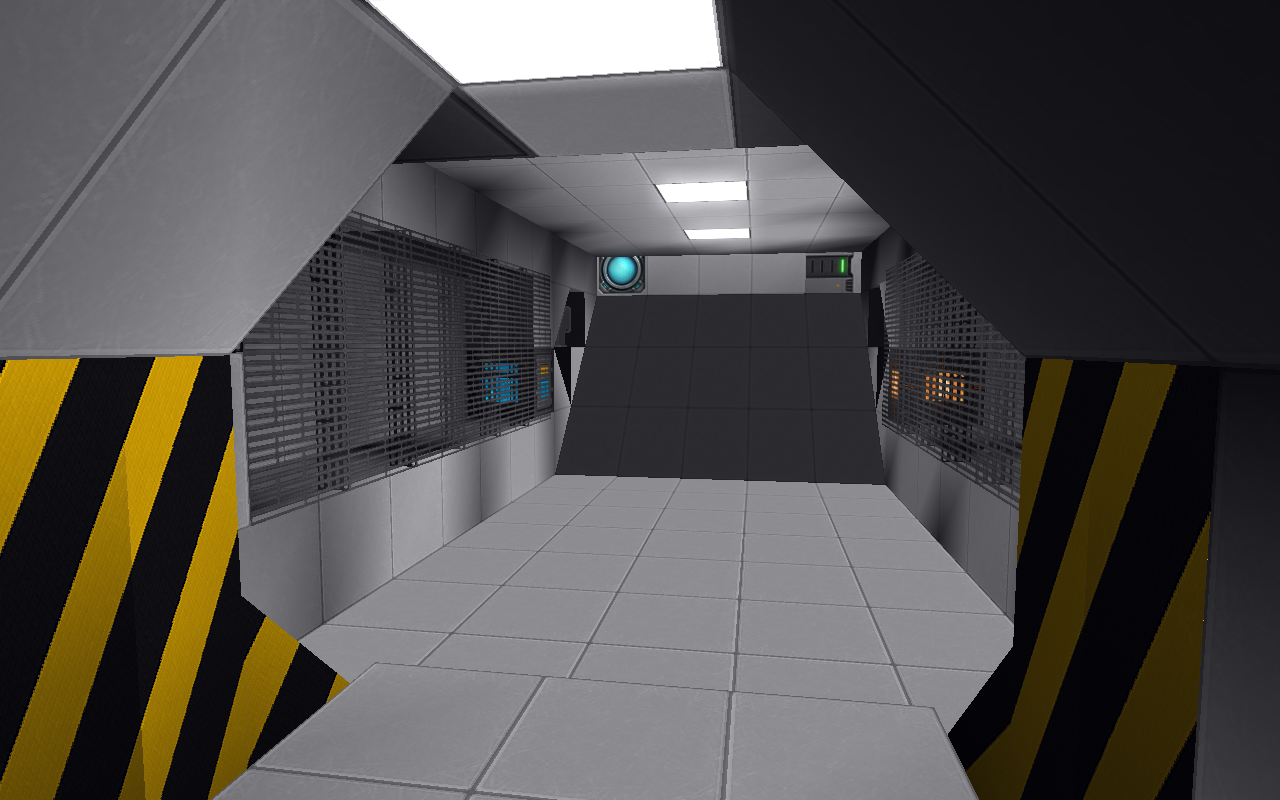 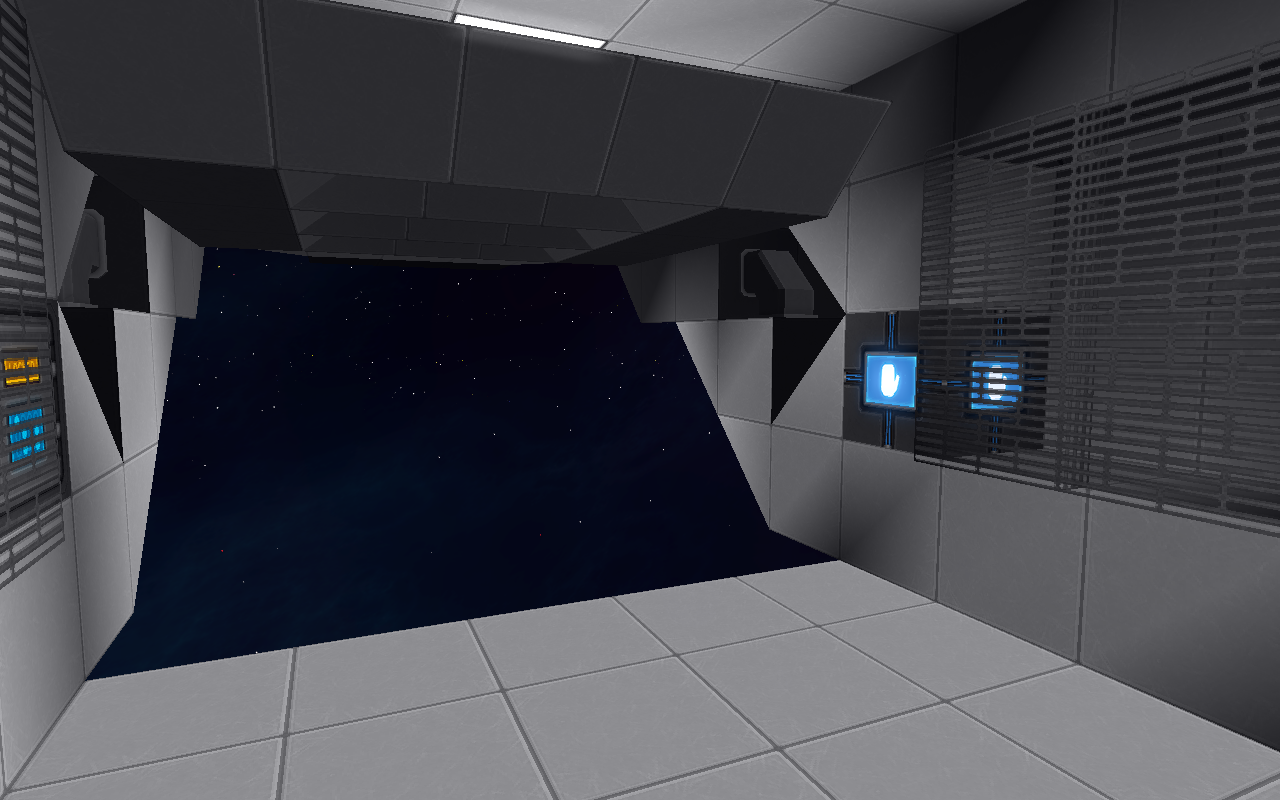 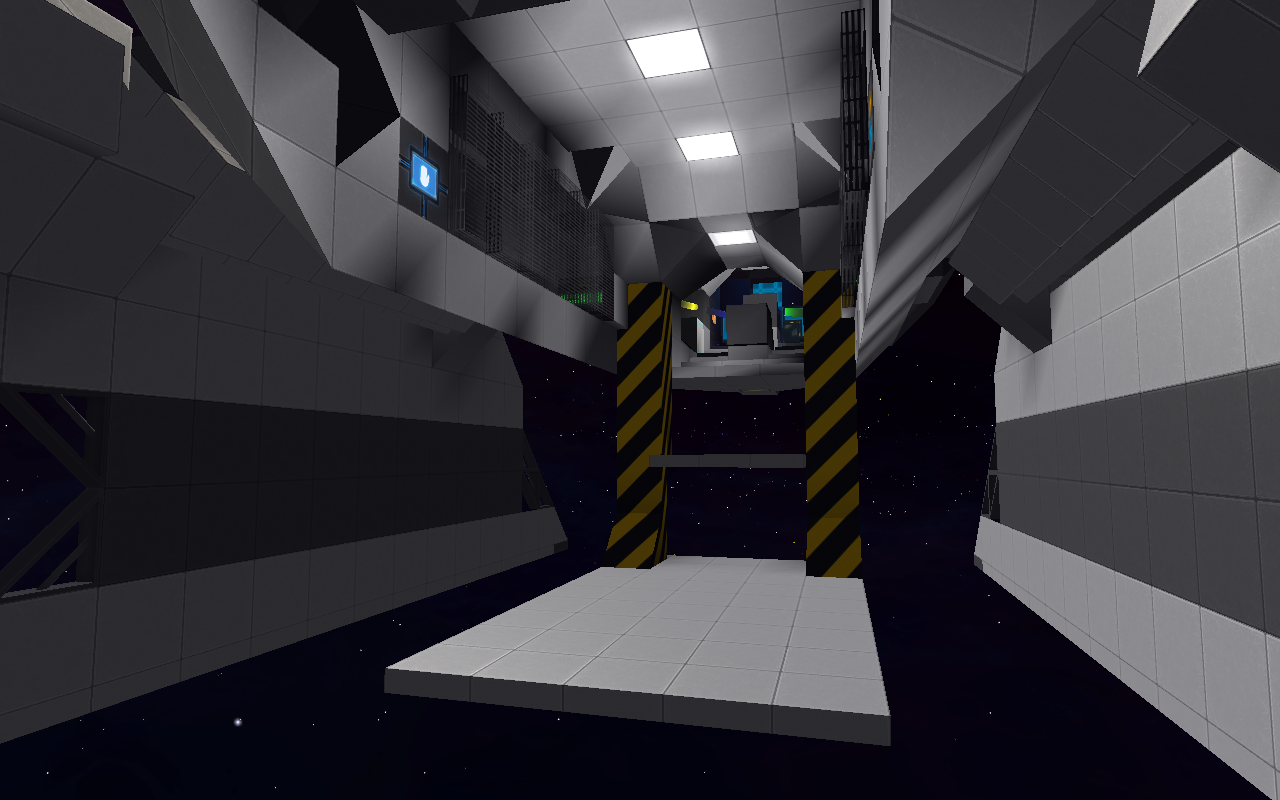 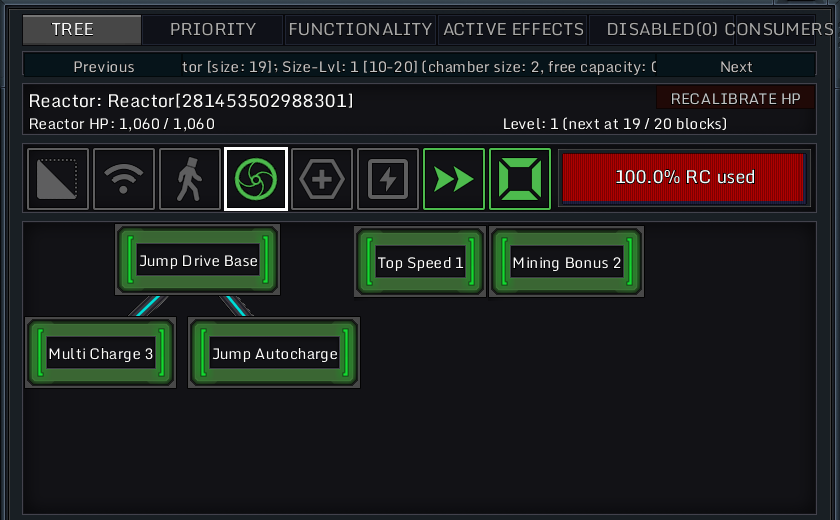 Corner light bars got physical (as expected) and broke the 1D-4U's ramp and landing gear so same idea, new direction maybe a bit more refined and actually useful. Has lots of logic because it's cheap including cross-function lockouts and weak anti-spam protection for the wing functions but they will fail if abused. After selling excess blocks had about 17k credits left.

Tell the princess I've got that shipment of assault blasters she's been waiting for. 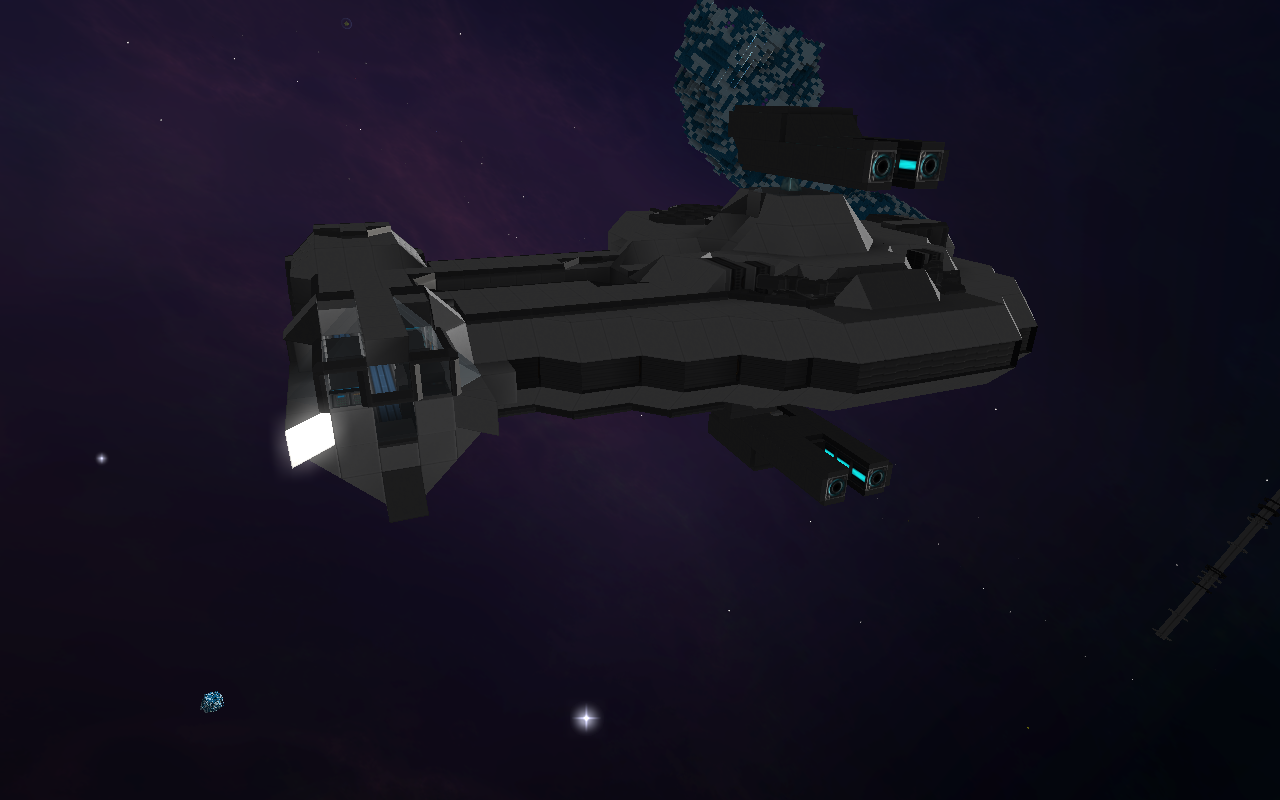 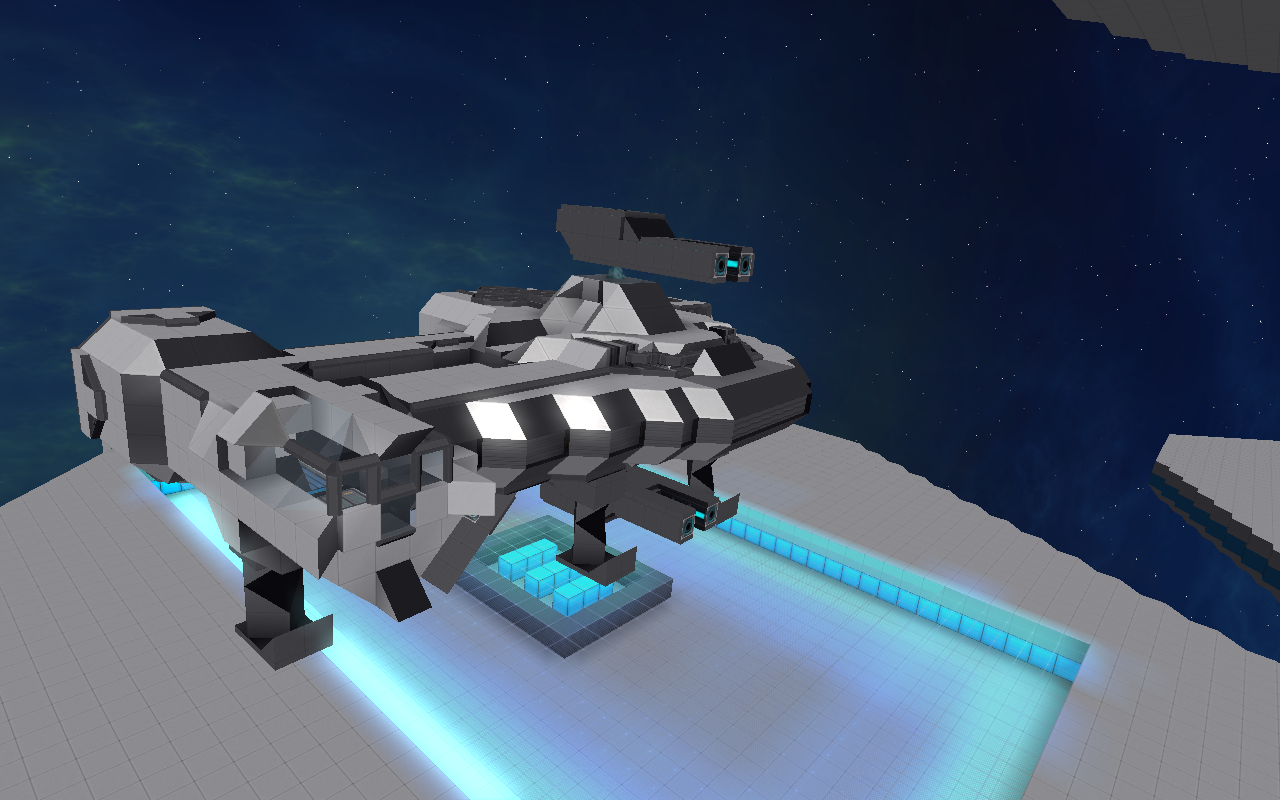 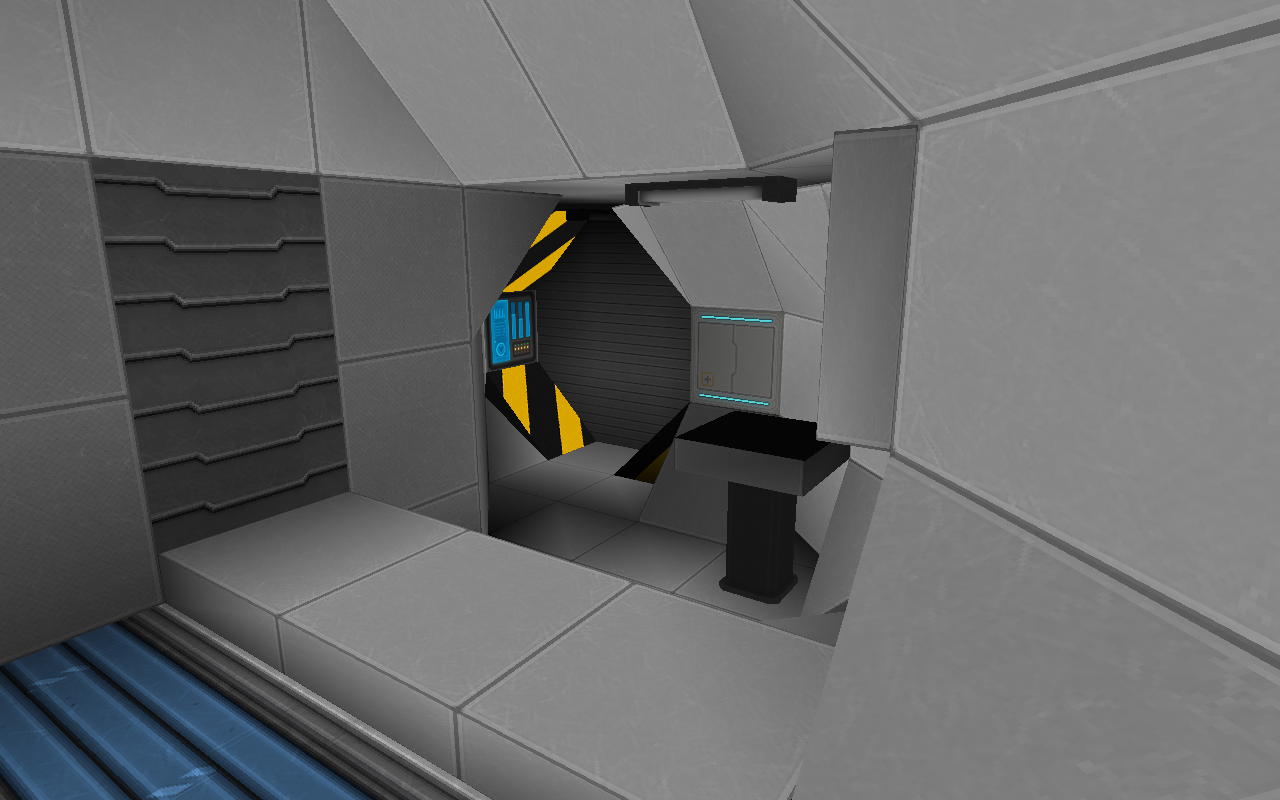 RP turret access. You seem to exit from the turret bases back into the ship's interior consistently. Crammed ice crags in certain spots to control character spawn location - maybe. 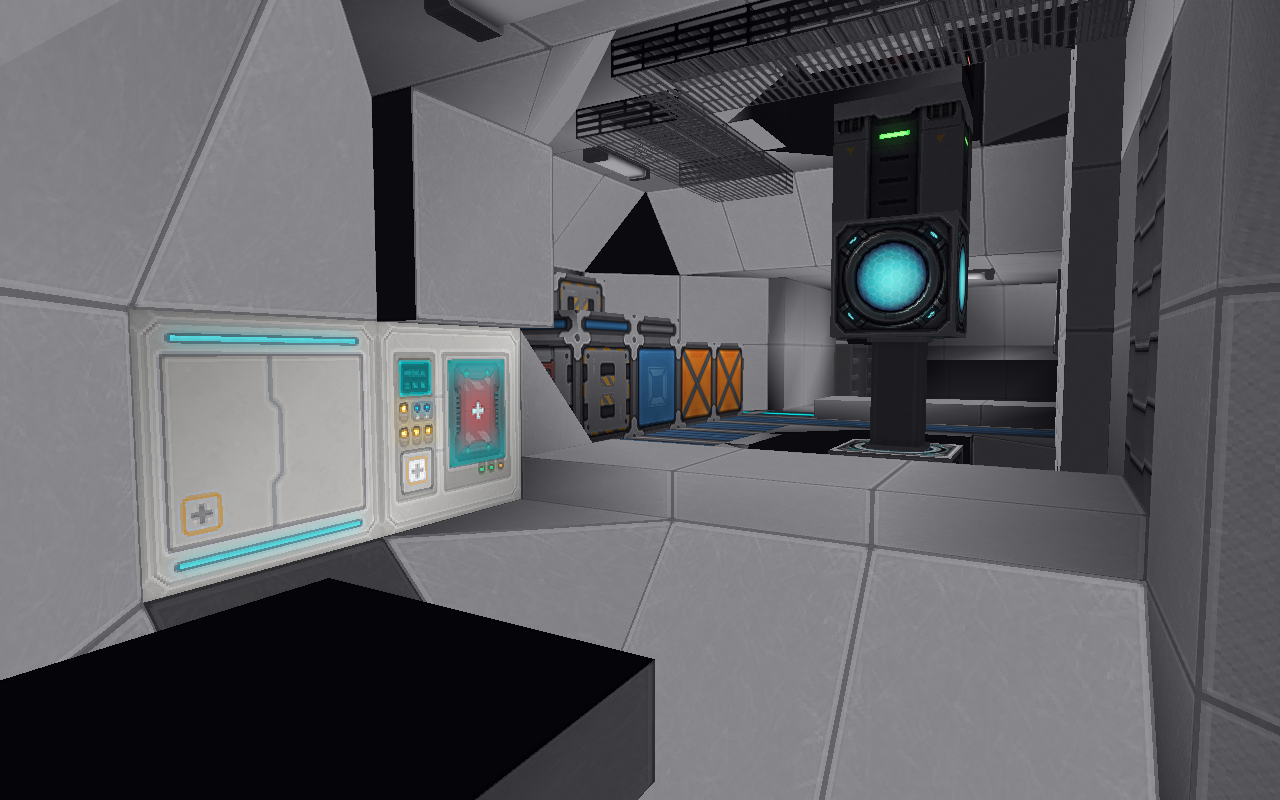 Seats four, core dumps you out in space (most of the time) if you don't sit. 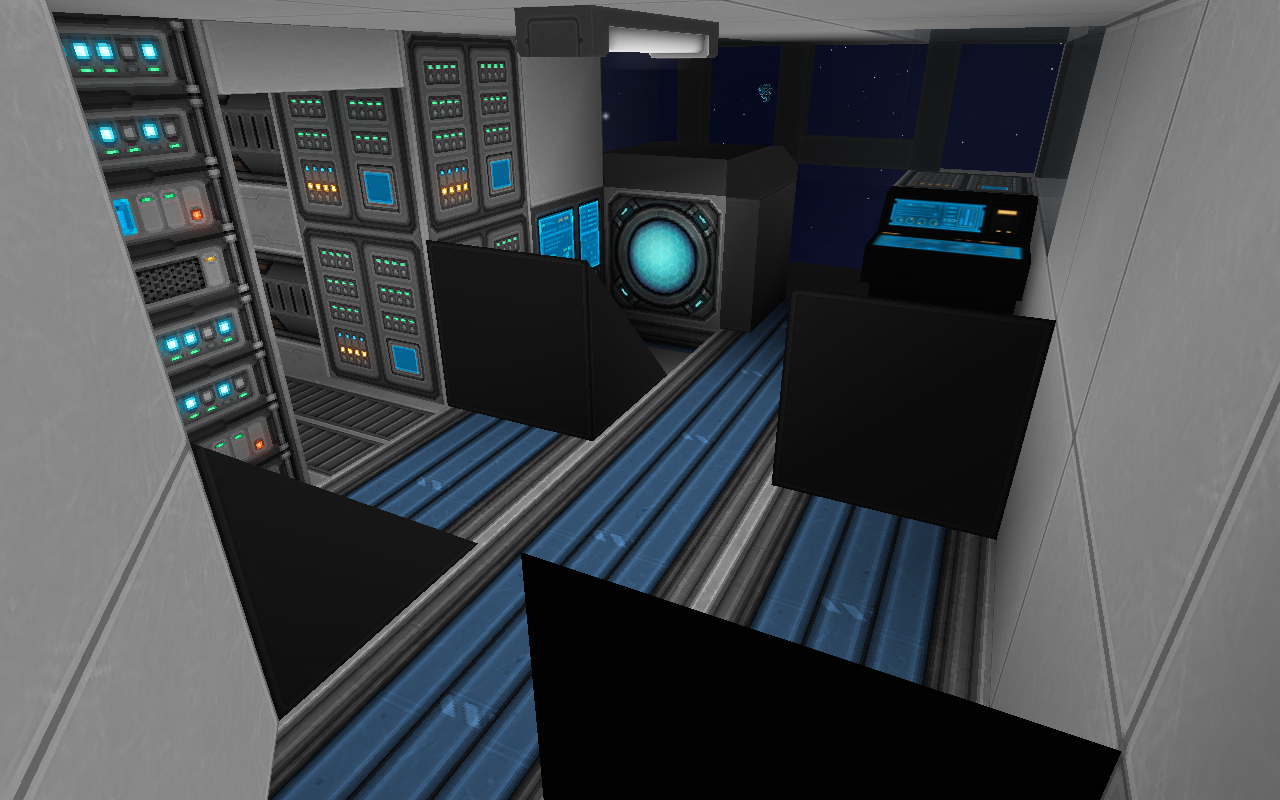 It's got one pod. The wireless refuses to connect (spagget) so you gotta manual launch from the open pod door then sit real quick. Activation beam the wireless module to re-set for docking. I ain't gonna fight StarMade bugs. 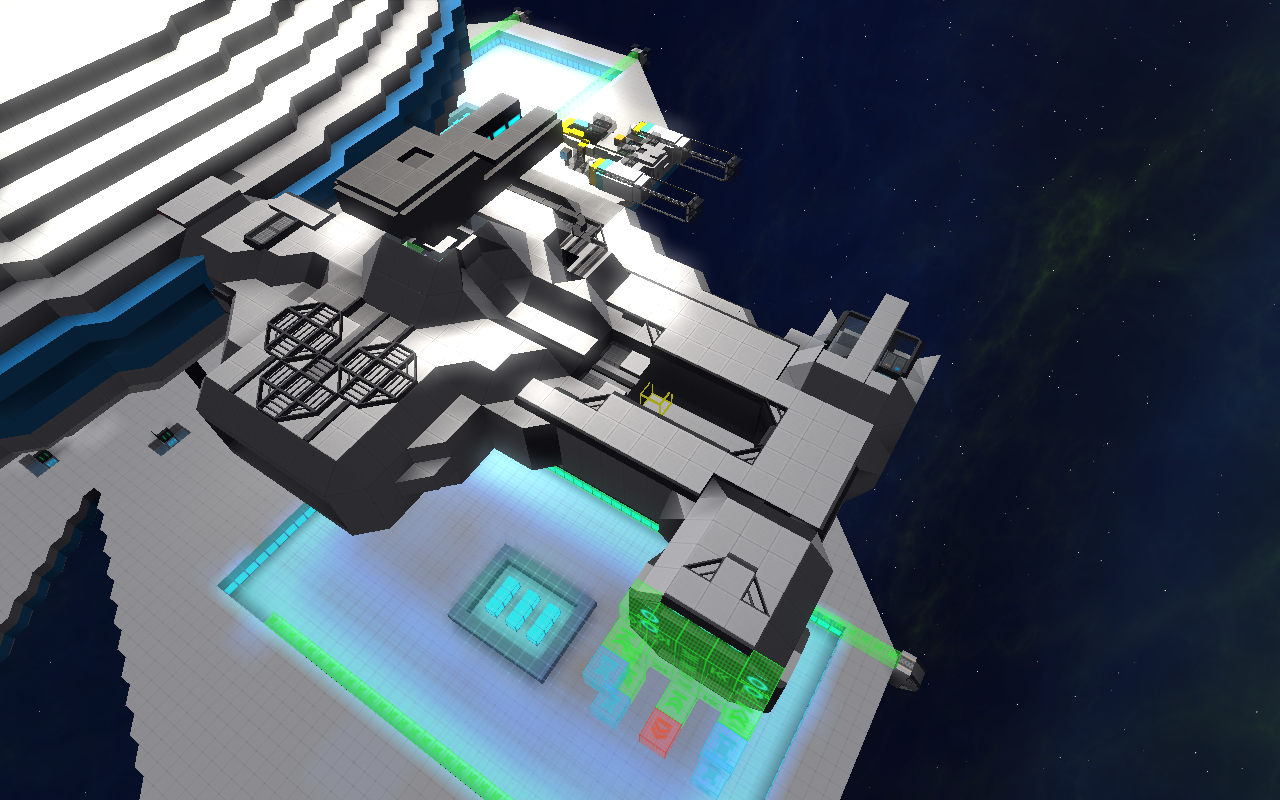 Turrets are a bit big as was the style at the time. Systems balance level - RP/meh

It's hard finding any two images of the YT-2400 with similar details.

Juniper Rocket Appliances...
Sounds like the only faction that come with onboard firewalls by default...

Whatever you do, don't do this; 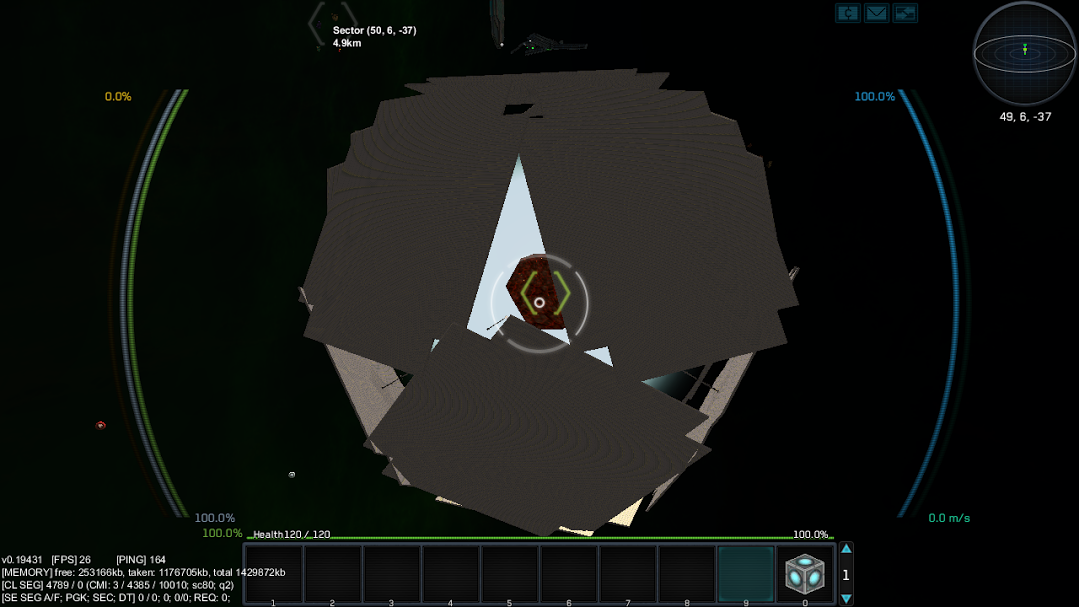 I did this back when these planets were pretty new. Pretty small radius desert planet to start. I think the cut-corners on the rock squares are 10x10x2. Essentially each planet plate gets a new layer built so far under itself that it's 100m above the surface on the opposite side of the planet. 1x1 rock built out from each planet plate and all the way around to the opposite side of the entire planet then maybe 100m? straight down from the plate it started from which is the same as straight up from the opposite side of the planet.
New plate gets built and the old desert plate part of it is build-blocked away with the new plate keeping the same planet-gravity direction but pulling away from the core on it's new side of the planet.
It seemed like it would be difficult to mesh the seams but there was no collision detection at all. Great! but worrying. Testing was done on foot and by skid-racing; both required some jump effort but worked. I don't remember if I crashed out or logged but the sector never loaded again which seemed pretty fair.

You took everything from me 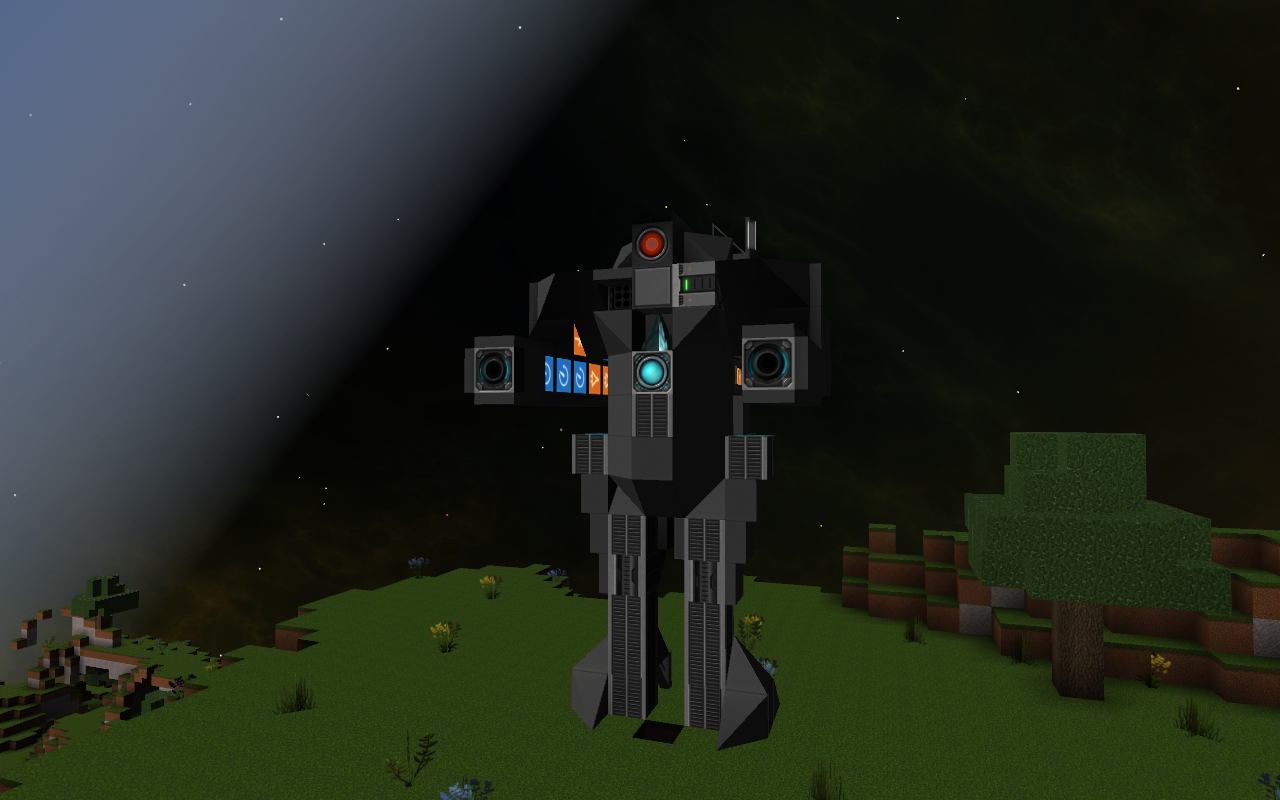 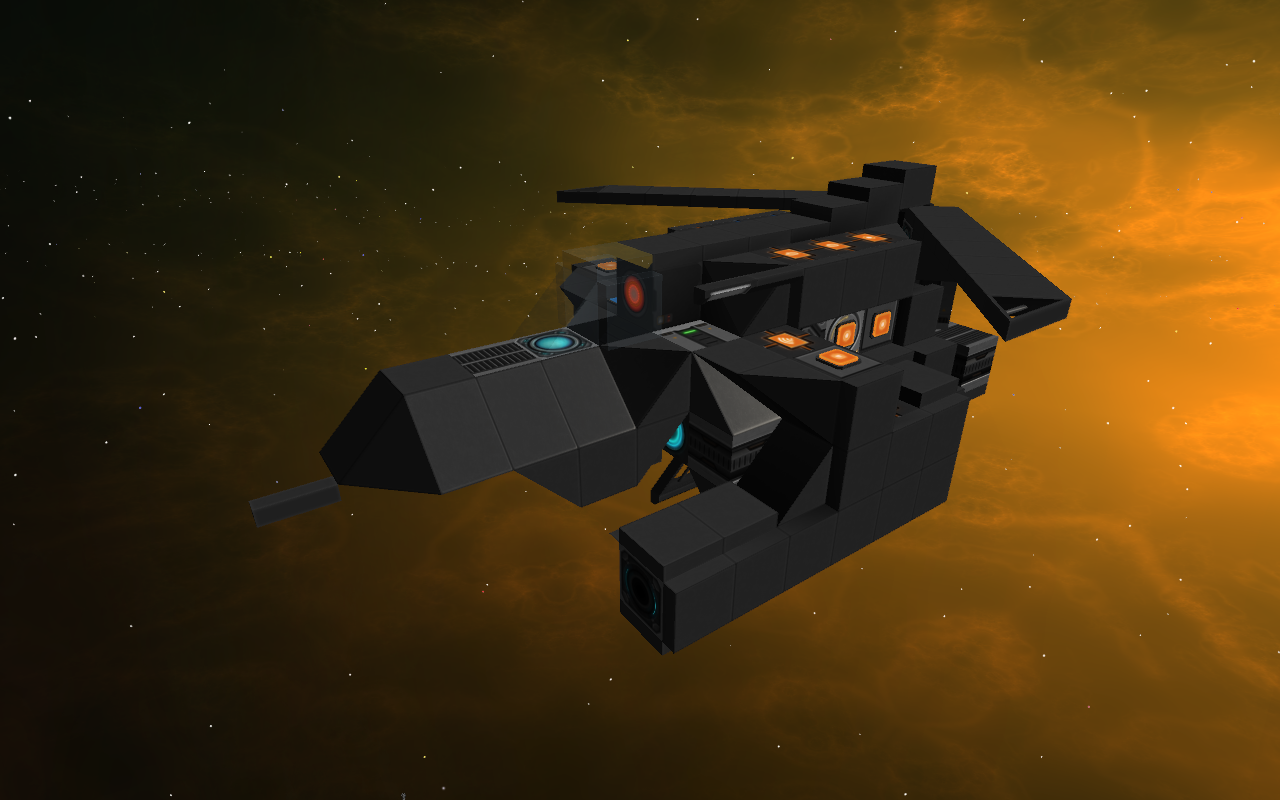 The Toroito had to fit a 13m tall hangar and transform. After two abandoned versions the result is acceptable. Has arm cannons, shoulder missile, remote to control access to a ships docking system, good thrust-to-mass and not much else. 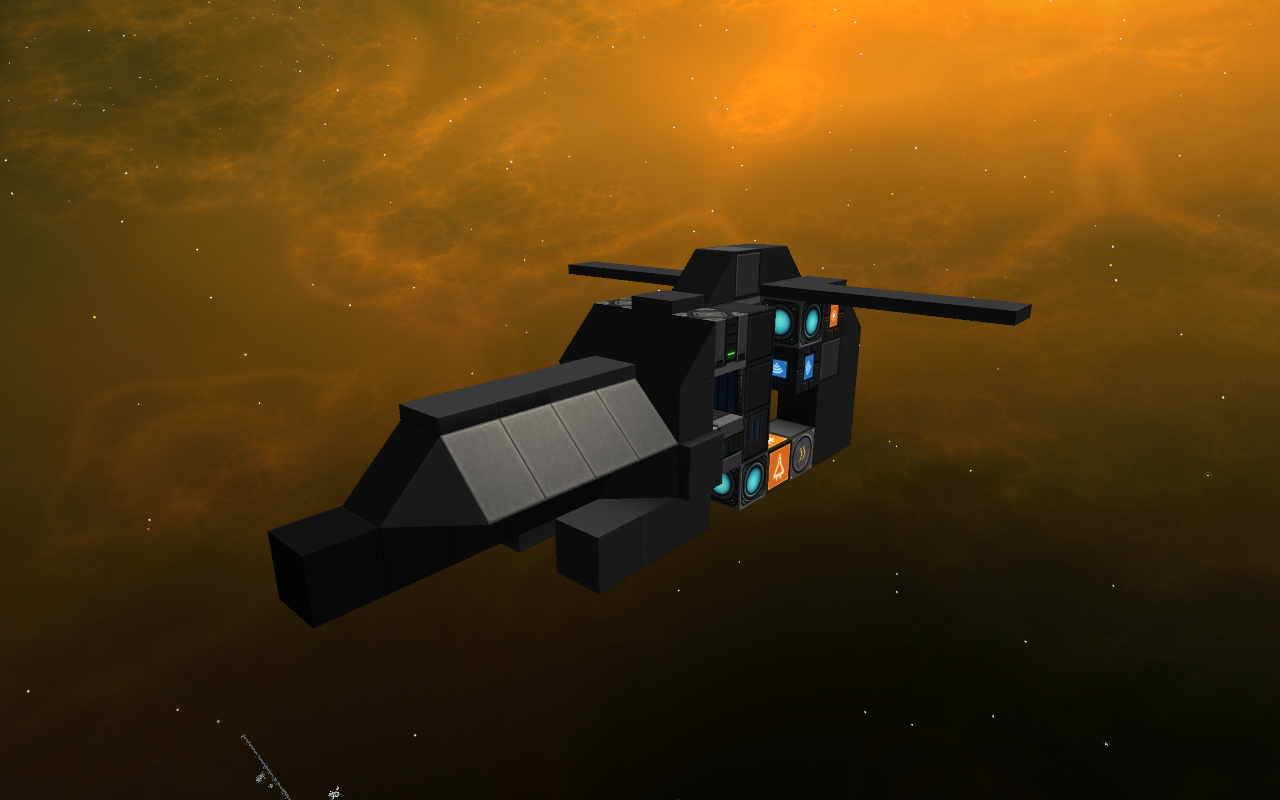 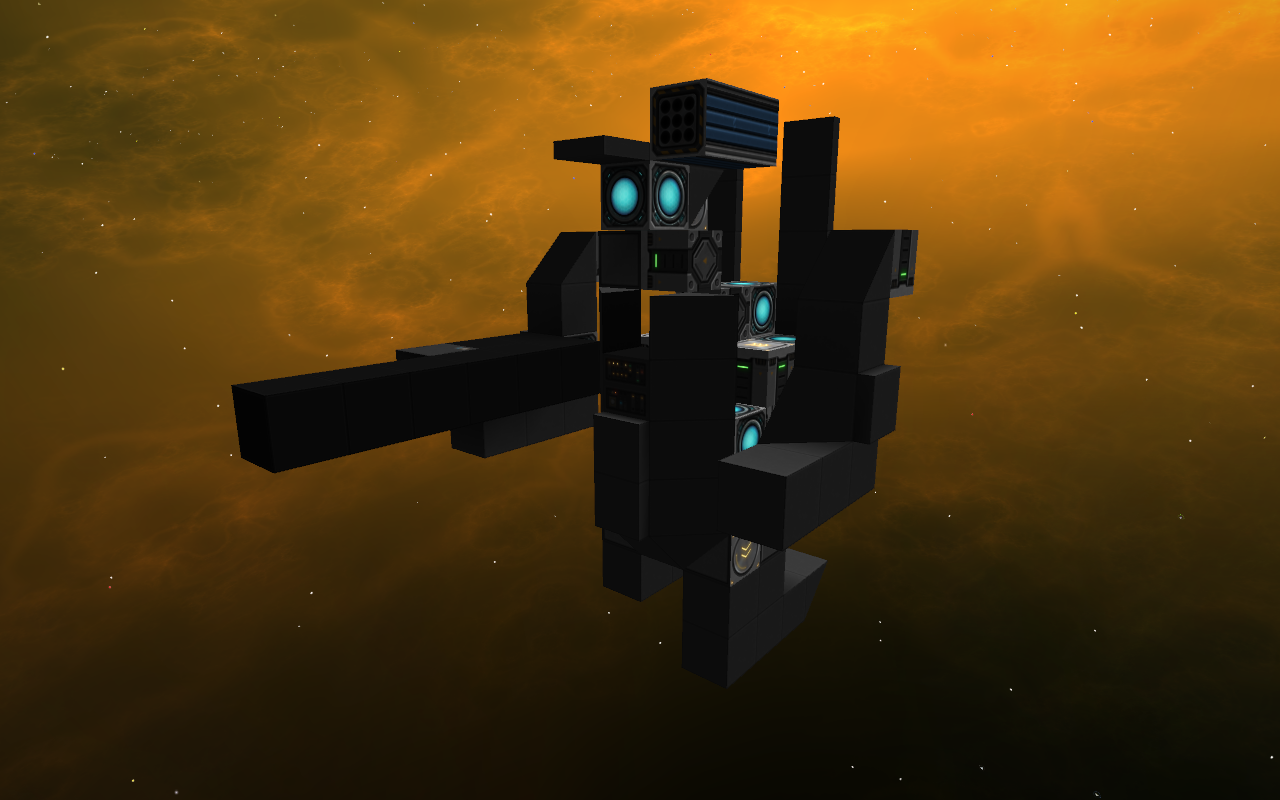 But the frame had no-where near the volume needed for the logic to control such a complex transformation; 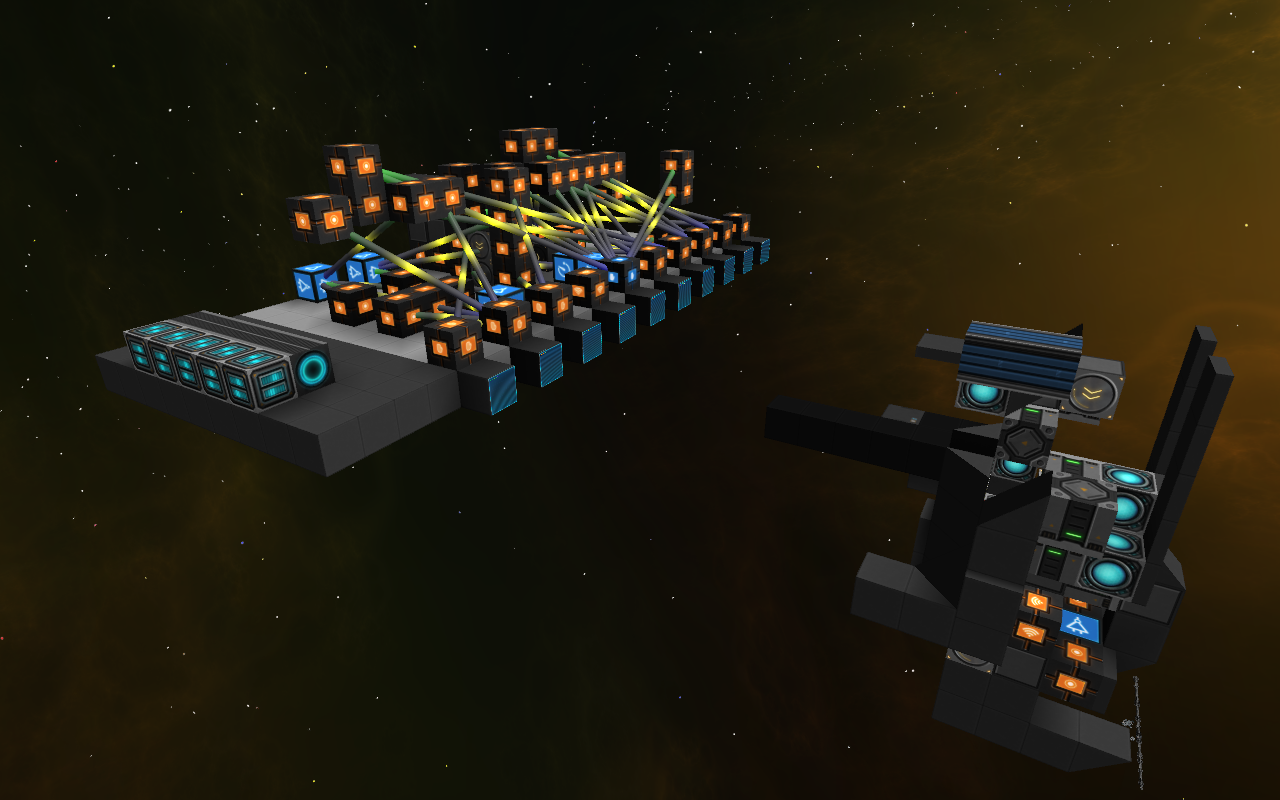 The mark II simplified things quite a bit; 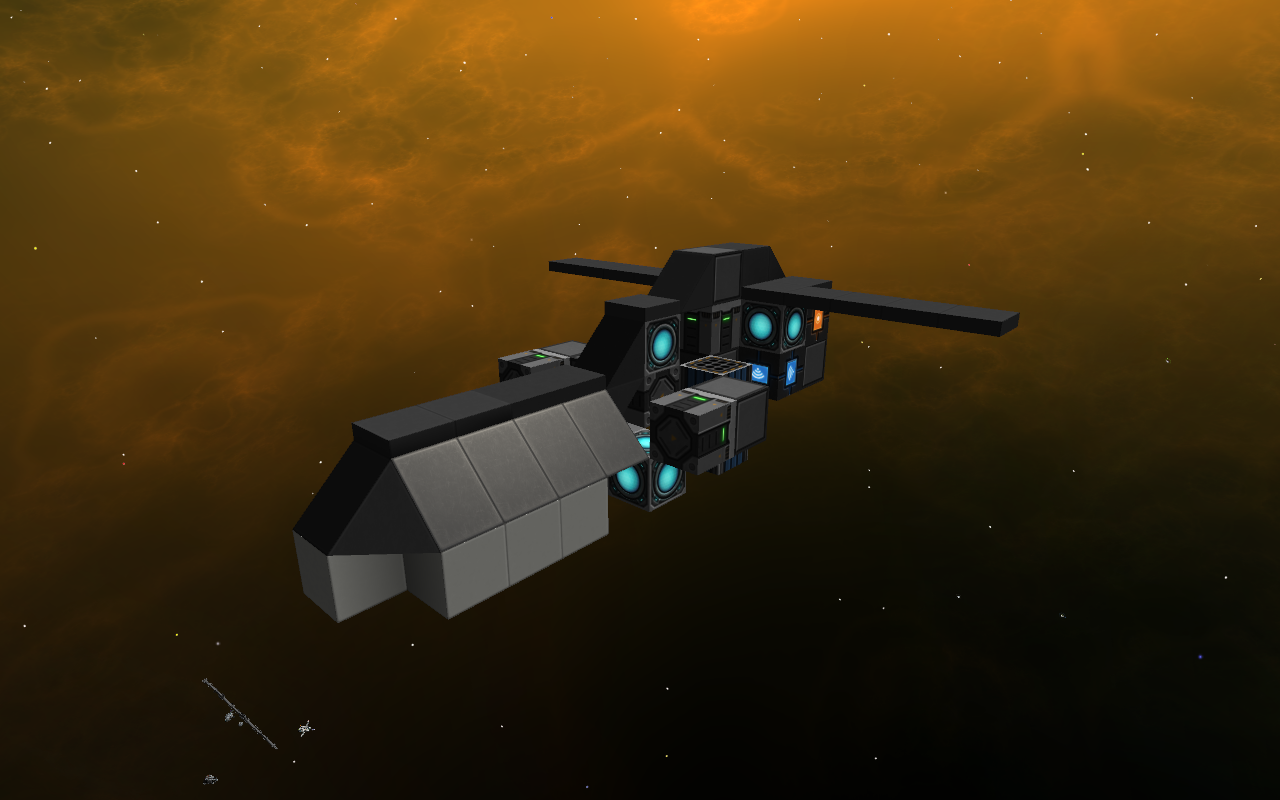 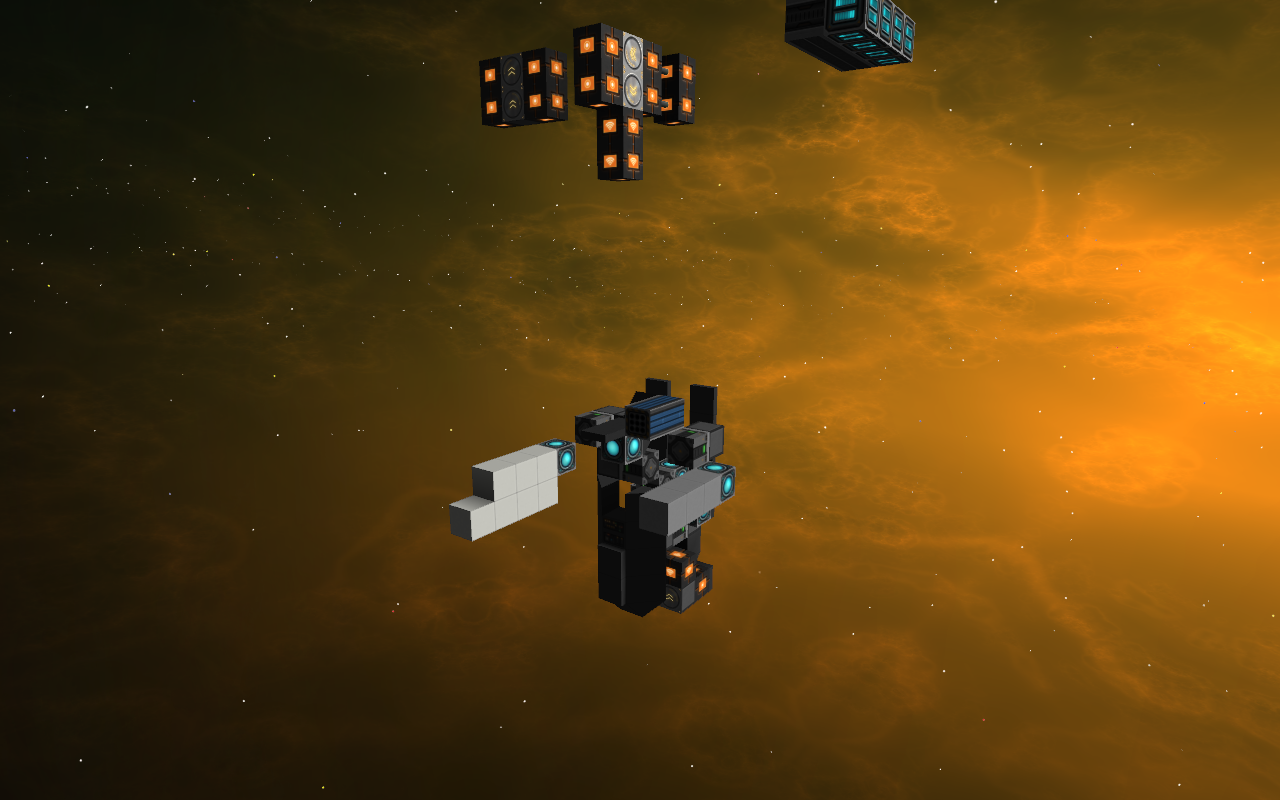 But was abandoned as the frame couldn't reach the desired shapes while still being overly complex. Eventually the mechanics of the Bulldog were adapted to make this smaller mech function. 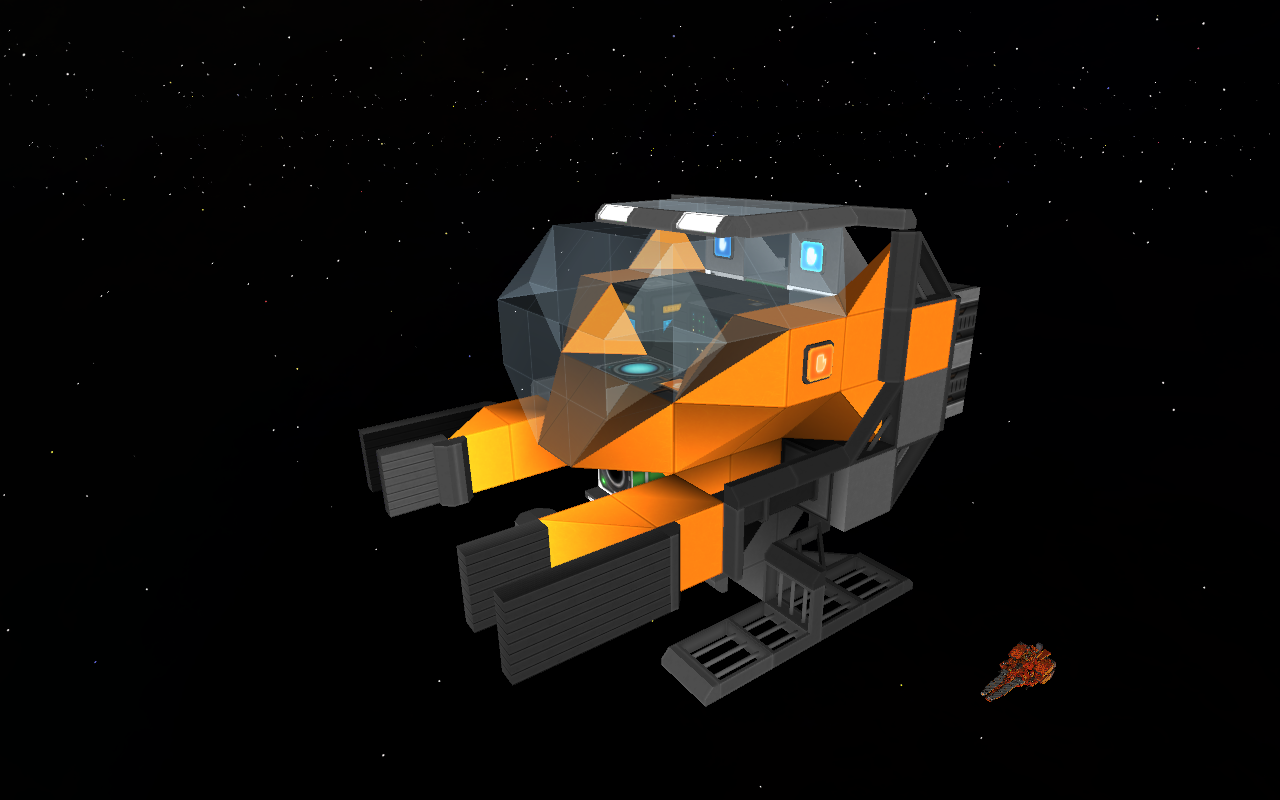 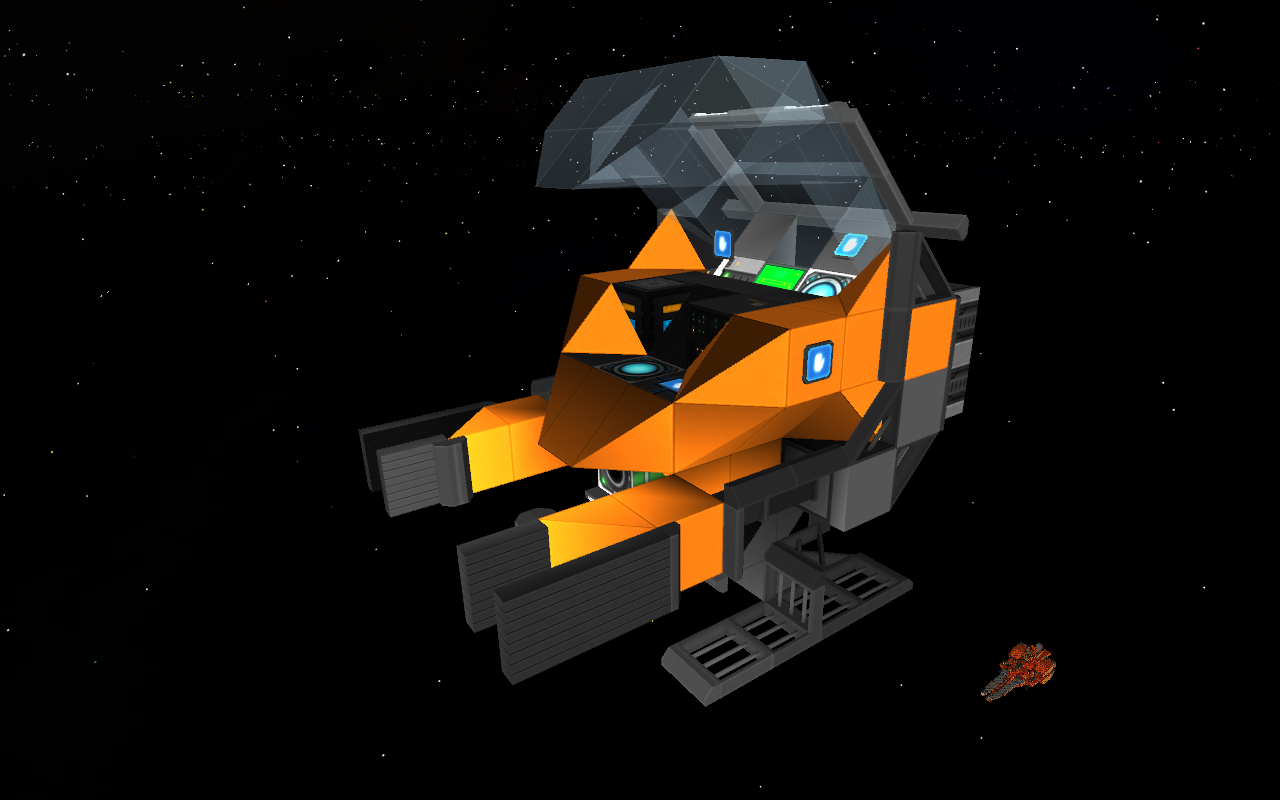 An unarmed petite mech used for construction and salvage the Memohachi has very high thrust-to-mass, a tractor beam and exterior illumination. It is well suited for it main role in filling up an empty corner in a hanger.


Abandoned but finished, it was not compact enough.

Interior door control is behind the seat, exterior lights and landing gear controls are on the ceiling above the seat.

There are all the controls needed to fold it back up but it's not automated nor labeled.