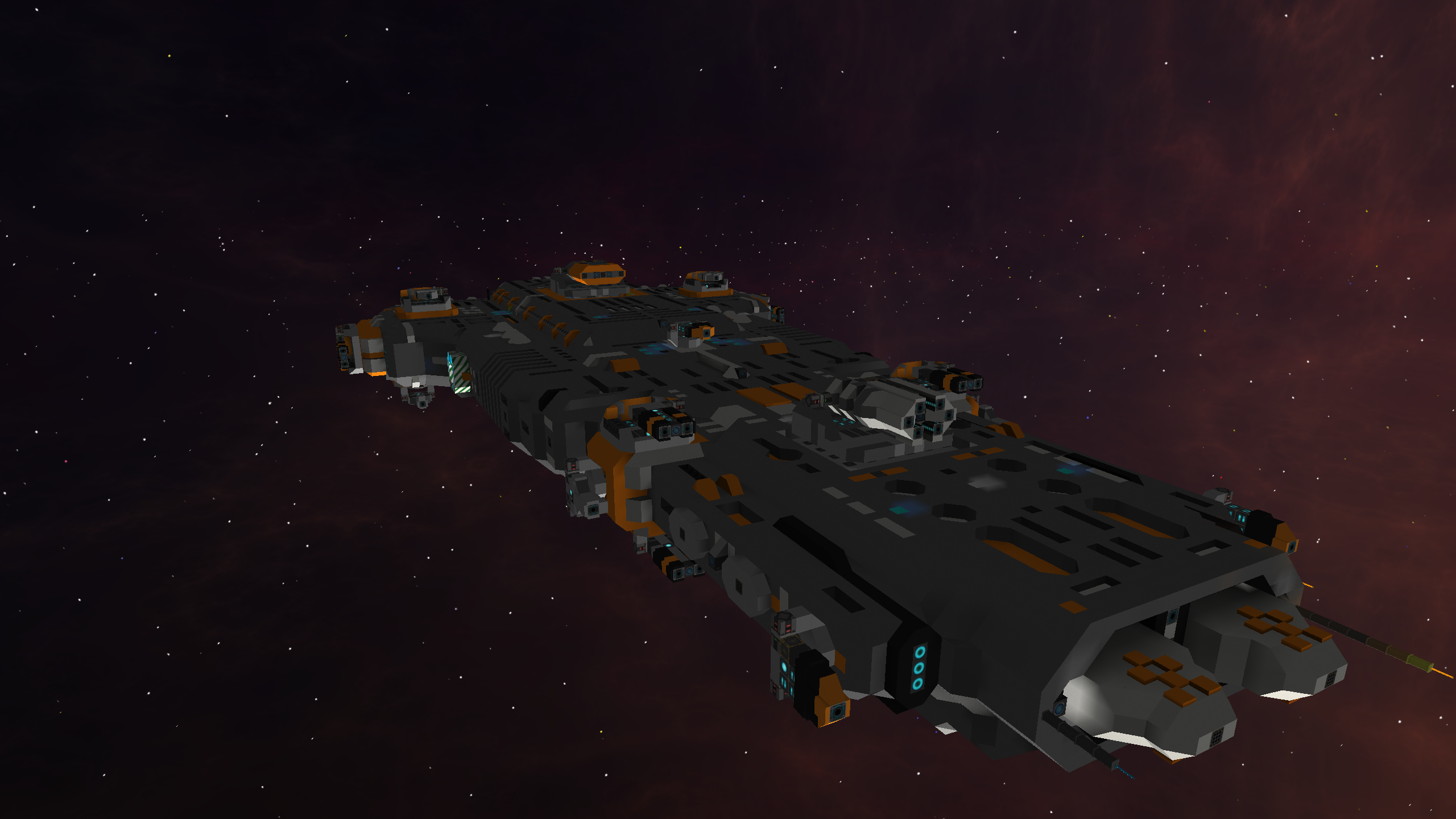 originally envisioned as the superior to the Longbow Class Corvette, the Arbalest serves as the heaviest vessel currently in service. Designed with the premise of being a common ship among heavy attack groups, the weapons capabilities of the arbalest were pushed to the absolute limit of what was possible.

Sporting up to Twenty turrets, the arbalest is capable of annihilating fighters and gunships at any range, only encountering difficulties with similar tonnage vessels or super heavy static defenses. many of these turrets are 'micro' turrets, trading immediate damage for less power drain. they serve as PDC's, experimental Pulsar lasers, and a staggering array of auto guns. its sole exception to it's short-range turrets, are the two 3-barrel missile turrets and two the 6-barrel cannons, designed to compete with medium vessels.

It is in missiles that the Arbalest especially shines, capable of delivering a jaw dropping number of missiles towards a variety of targets or focusing a single unfortunate enemy. With a forward missile array and two broadside batteries, this allows the arbalest to become the center piece of lighter combat formations, or a common attacker amidst larger ships, offensive or defensive. With a capacity of 21 missiles, it's guaranteed to land a hit, even amongst the densest anti-missile screens.

Among it's various weapons though, is a twin barrel Laser beam array, which adds a deadly (if slow charging) variety to its strike capabilities. while somewhat incapable of striking fast moving vessels, this serves as a perfect balance for a frigate-to-frigate battle.

Another notable feature is that unlike previous ships, the arbalest entirely forgoes the traditional 'bride'/cockpit, instead burying itself in shields and armor, using numerous sensors and cameras to obtain a visual on the enemy. this also conveniently creates a symmetrical body, allowing maximum turret, camera, and sensor placement.

the Arbalest's Size also allows for dual airlocks and docking rails, a medical center and a cargo area, although it lacks any transfer rails. this means that it's crew can mostly operate independently for a significant time before refueling, repairing and resupplying.

However, it's emphasis on weaponry and versatility means that it suffers two tradeoffs.

1) in order to not strain power, it's shields are relatively weak compared to dedicated frigates. while its capacity allows it to tanks hits, it's not meant to endure swarms of strike craft alone.

2) while not slow, it's speed of 300 means it falls behind most light counterparts, so any fighter or gunship fleet that gets in trouble should be ready to fall back or hold on until the Arbalest, or a squadron of them, gets there. However, this also means that should the Arbalest be overwhelmed by fighters or superior forces; it may need a cover for its retreat.

Another strength to counter this speed deficit and is it's Auto charged, multi charge FTL drive, allowing the arbalest to maneuver in and out from a combat zone, if conventional drives are down or not fast enough.

And to add to all this, much of its interior is relatively hollow, allowing for further post purchase/construction modifications to either engine, shields, armor/hull, power, logic, cargo, tools, or weapons.

Versatile, durable, adaptable to almost any role, and lethal at many ranges, the Arbalest Class Frigate is the pinnacle of rapid response Combat ships. 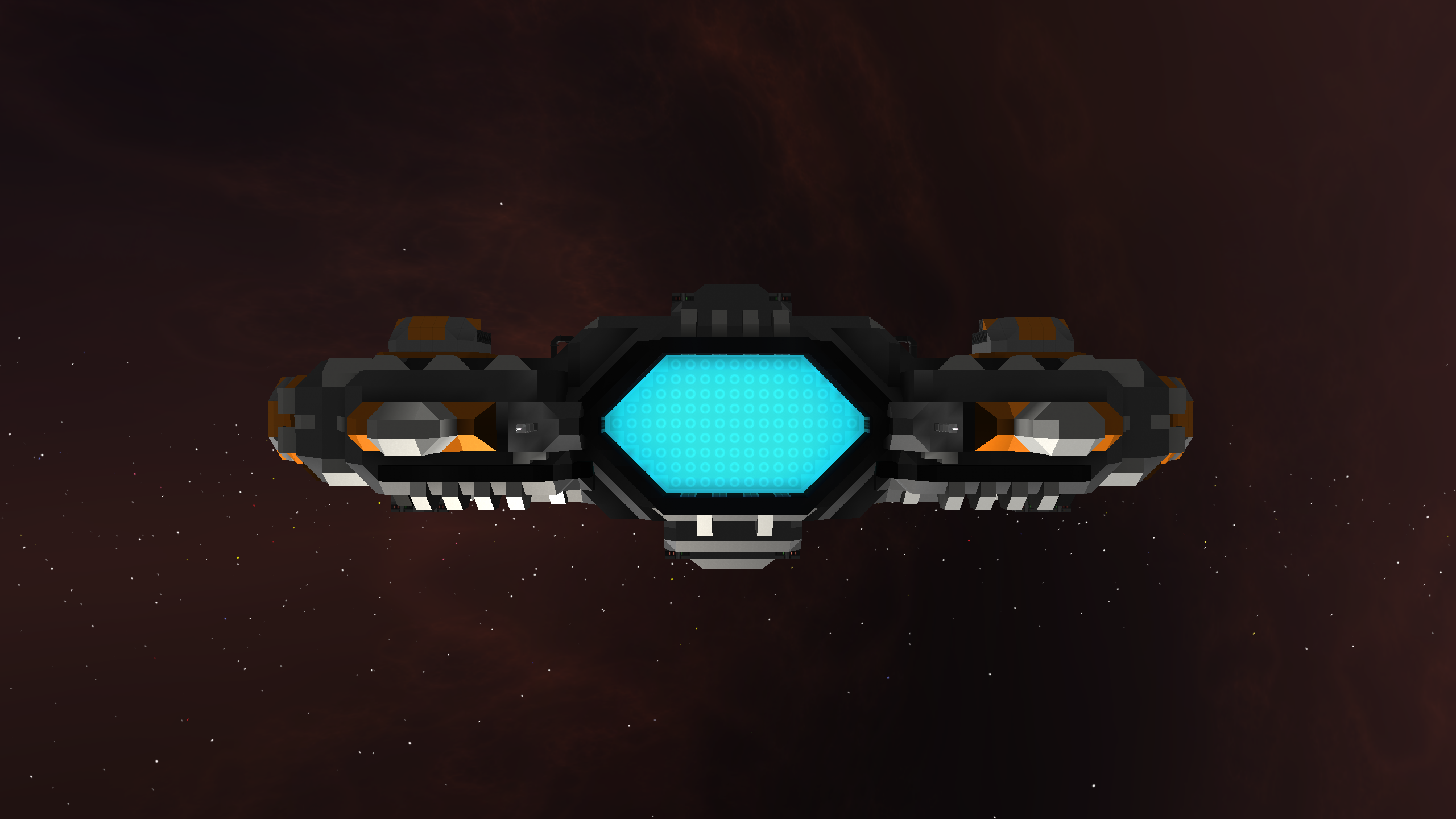 Pictured here is the super massive engine at the rear, allowing this ship it's speed (alongside it's speed chamber).

Docking ports:
style: USD
number- 2
locations- one on right, one on left. 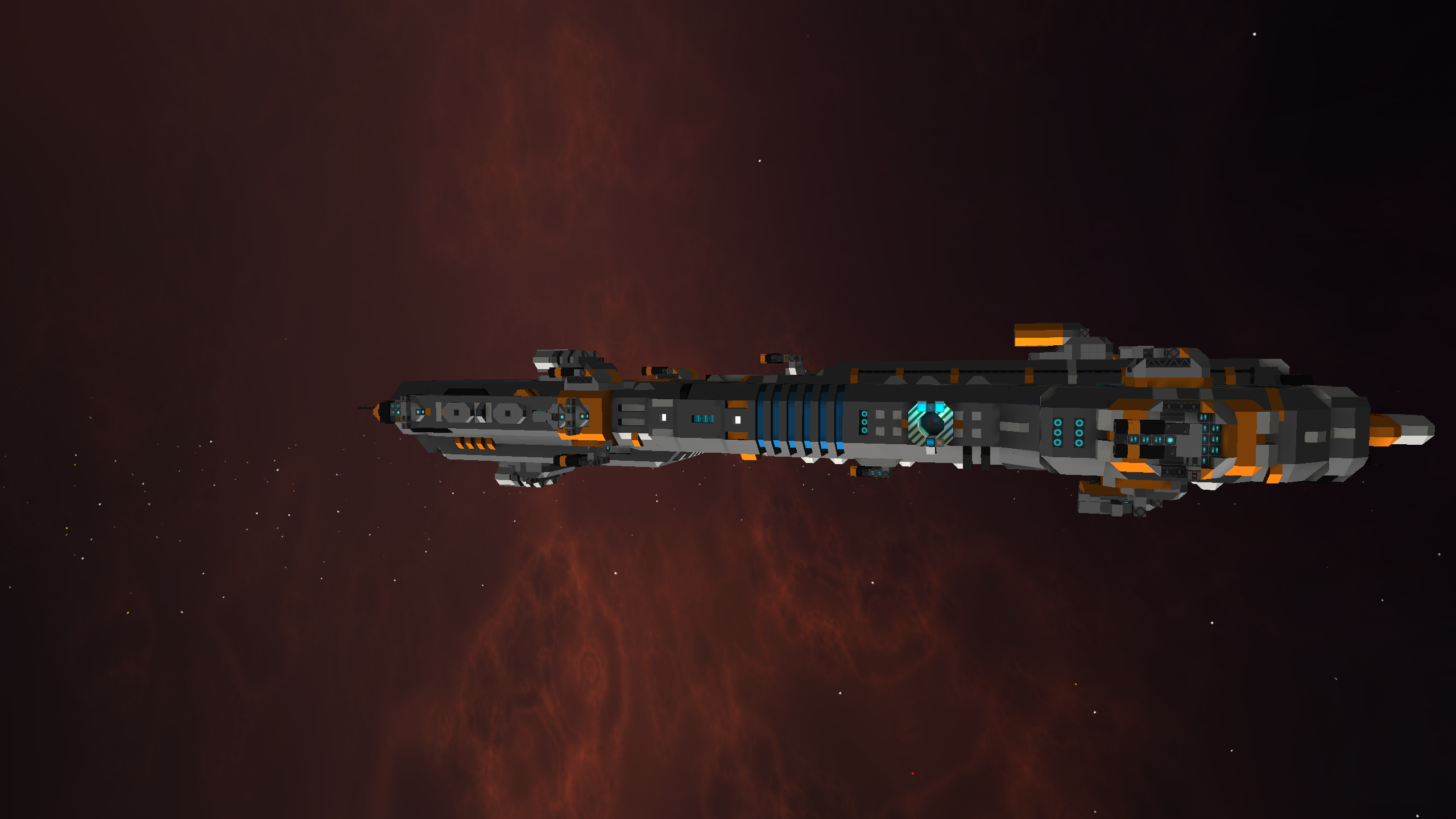 pictured here is the left side 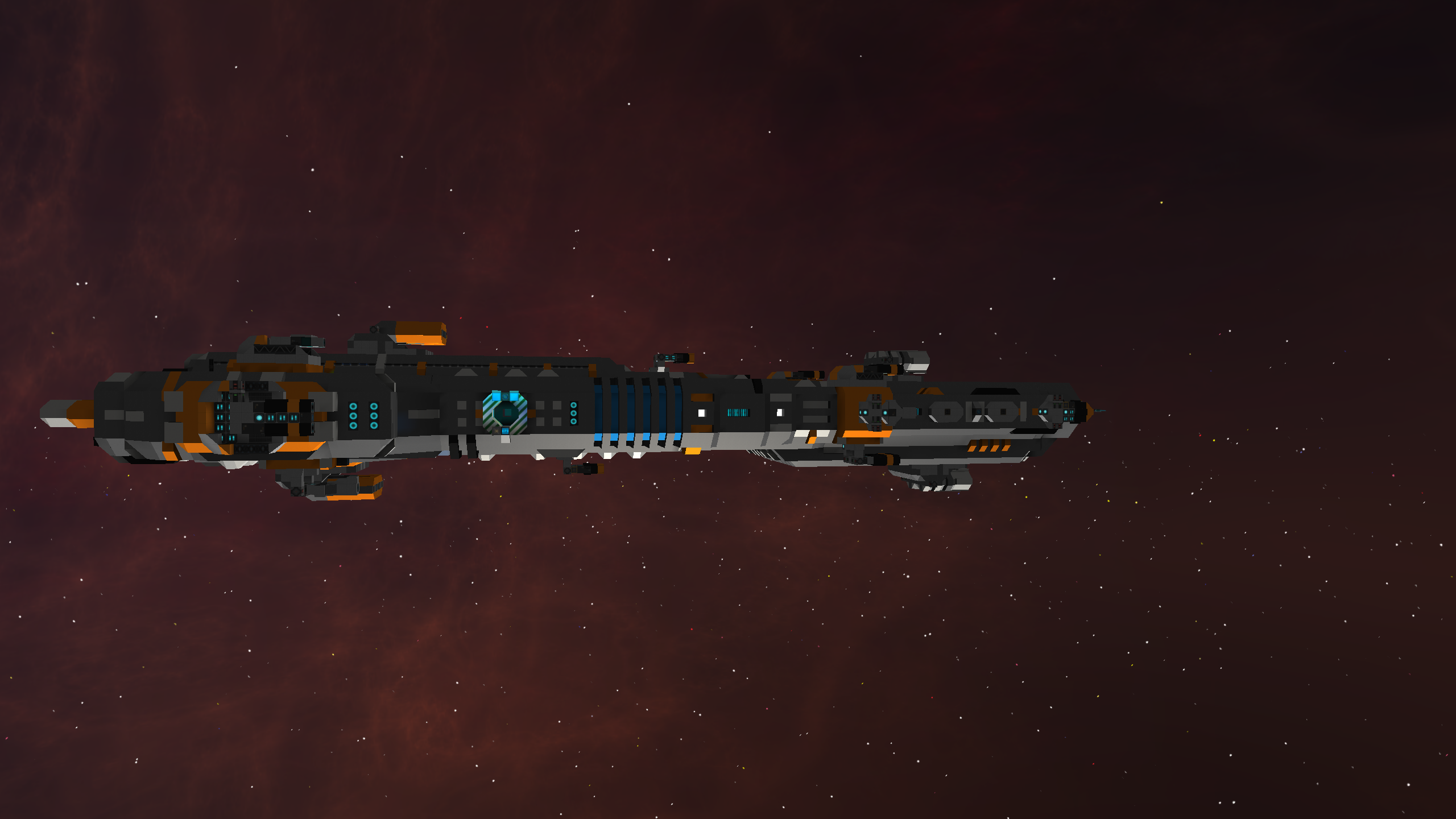 Pictured here is the right 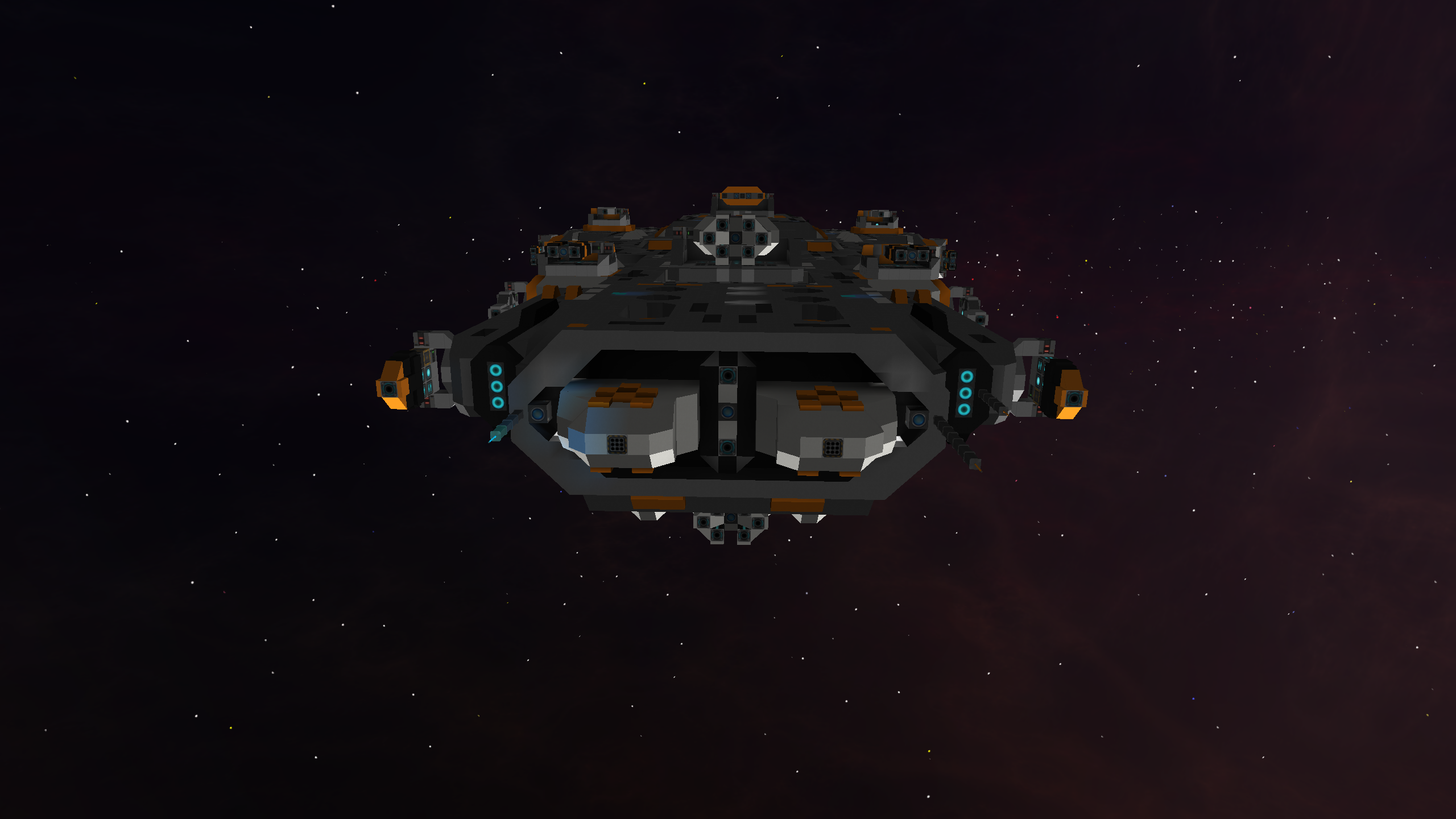 Author's Note:
After months of gameplay and constantly redesigning design after design, i am genuinely honored to bring you my biggest ship yet. i hope this makes your space adventures even more grand and fun.
Reactions: JinM and docpenguindoc

A nicely build ship. For a frigate design it seems to fit the role well.
A lot of time and effort went into this build and it does show.

The large number of turrets will give this ship an impressive rate of fire.
I do think that the turret designs could use some improvements. You could get a lot more systems within the same space constraint with a different design.

The hull design is nice and sleek. A low profile from the frond and sides. Should give your opponent less of a target. The hull greebling is not always consistent. Personally, I think it works best if the greeble looks like it’s a functional part of the ship. Like the directional thrusters, or a hatch hiding some sort of ship component.

Interior wise I’m a bit on the fence. It doesn’t really know what it wants to be? Its mostly just functional space but there are some roleplay themed areas as well like the med bay.
There is still a lot of empty space in this hull. It could be utilized for more interior space or systems.

In conclusion: A nice ship with some room for improvement.
Read more…
Top Bottom