When the new Universe Update comes out, there will be things like random attacks conducted against players by NPCs and other aspects of gameplay that will encourage players to cooperate for the purposes of achieving goals, or regularly coming to each other's assistance on an emergency basis.
With the quickfire changes eliminating free warp gate targeting and no way of knowing if the receiving gate is secure in a crisis even if that were not the case, rapid deployment vessels which can respond to an emergency anywhere in the galaxy or beyond it's rim will be very important to have blueprints for.

The idea of hopping into your bestest, prettiest, most carefully cultivated and refined battlewagon build, then riding it to the rescue is indeed attractive and will be lots of fun. But from the point of view of those requesting aid, it is very important that the kind of help they receive is actually useful beyond the immediate concern of driving off their attackers.
If you've just had your entire infrastructure devastated, you already have a laundry list of pressing tasks to accomplish along with things to remember, many of which are interrelated and must be accomplished in sequence, or you risk the entire recovery effort grinding to a halt.
In that circumstance, you do not need the additional mental load involved with spending the first day just learning how to navigate the labyrinthine bowels and functionality of a ship that's been given to you by well-meaning players wishing to offer you something to start over with, but doesn't actually require their presence.

It was with all of these things and more in mind that the newest iteration of Turtle Island was designed and built. Part blockade runner, colony seed ship, mining mothership, light carrier, cruise liner, long-distance freighter, dockable thruster pack for capital ships, etc.. Everything you really need in a difficult situation, packaged up in an easily understood, simple to use format that is surprisingly compact for all that it offers. 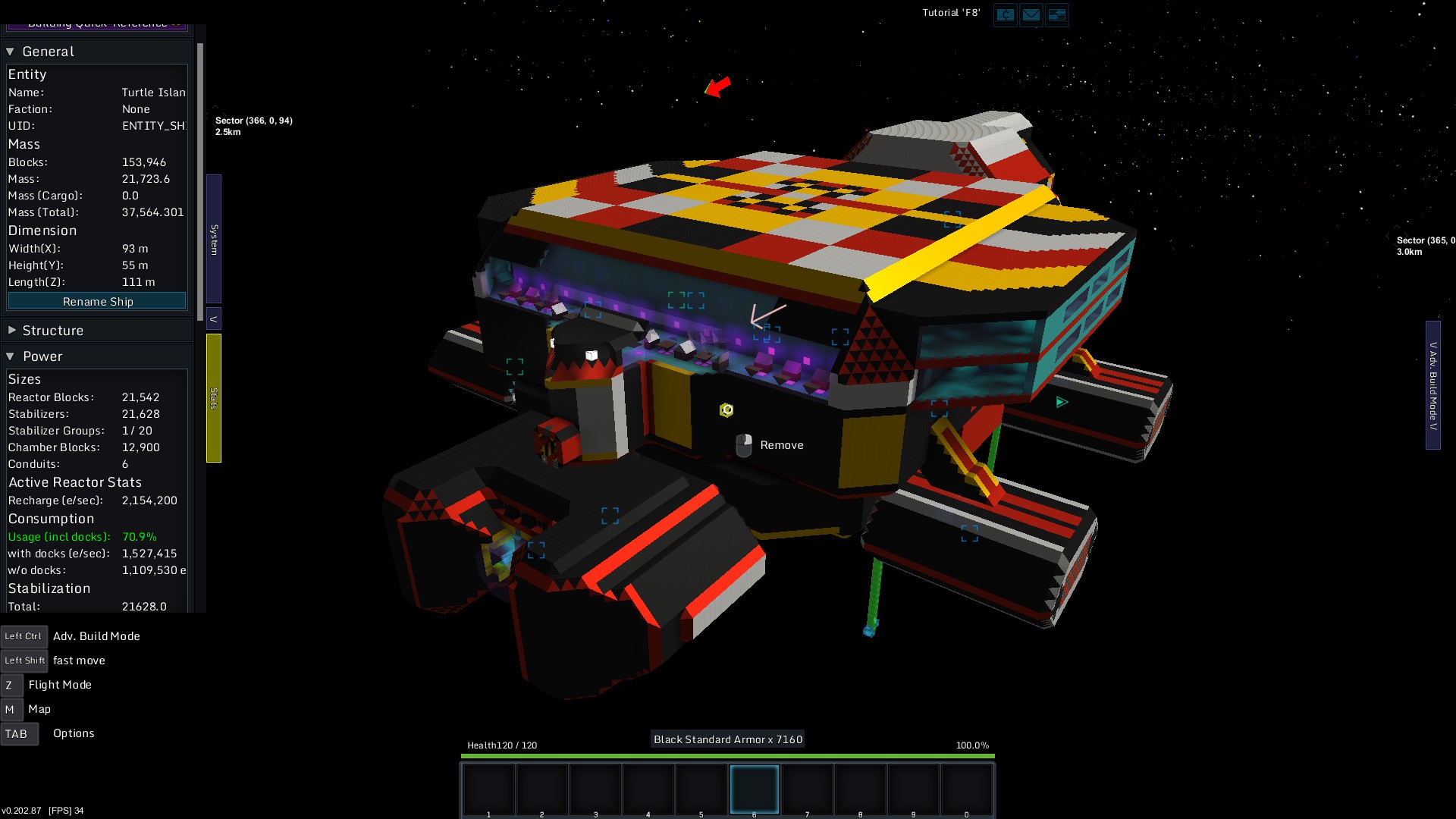 It's easy to navigate, understand and use for players unfamiliar with the ship. It is designed for getting into and out of hazardous operational areas with relative ease. Interdiction fields keeping other ships out of the area? No biggie. Turtle Island is built specifically to make best use of the Black Hole Slingshot maneuver, achieving pan-galactic cruising speeds of over 700m/s, as shown here: 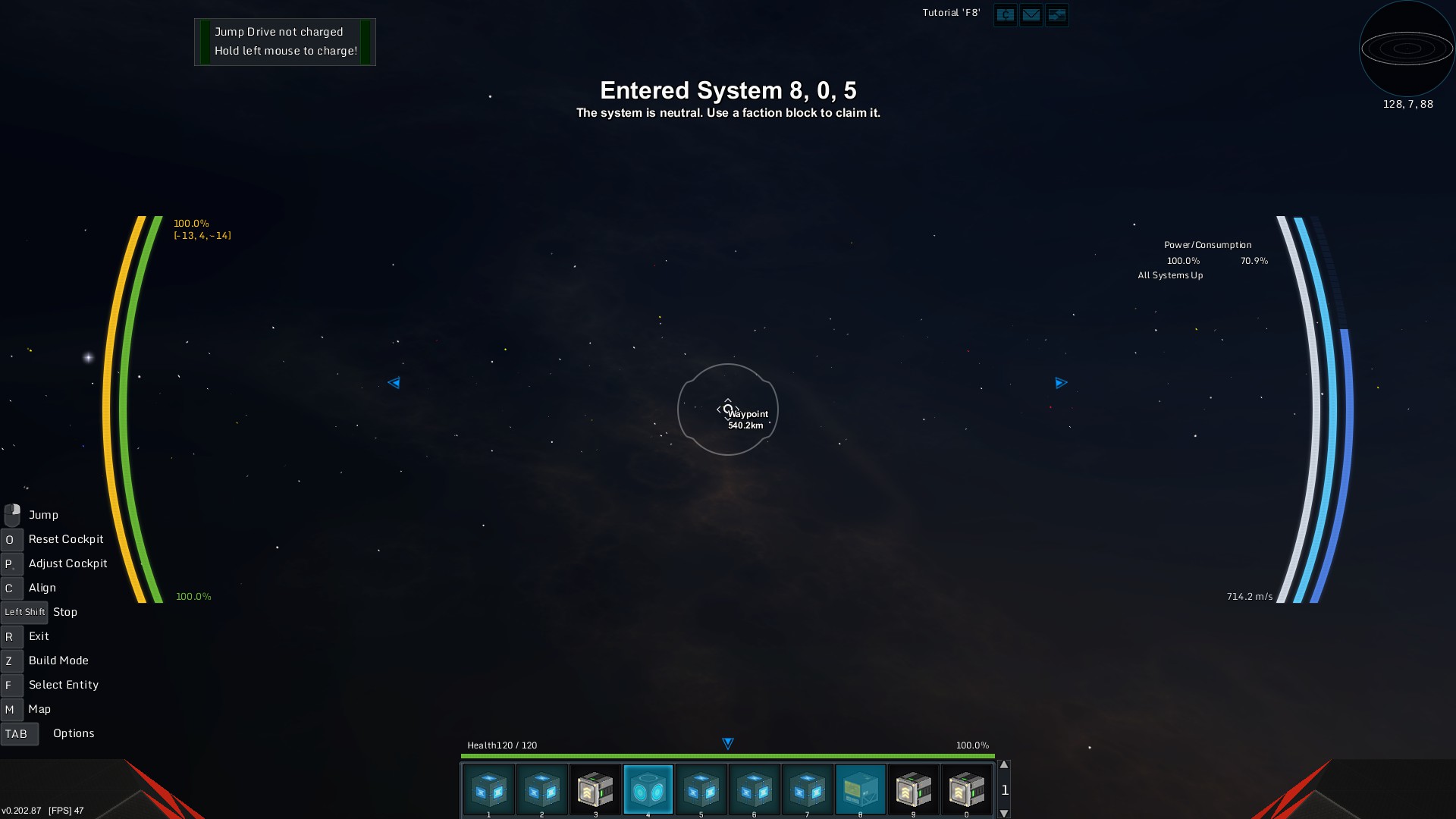 It has more than enough thrust for the careful side-thrust steering work necessary at those speeds. With skill and practice, it can make surprisingly sharp U-turns at high velocity. Even when fully loaded with it's ships, it has a conventional sub-light thrust speed of 274.9 m/s.
The ships it can't simply shrug off fire from, it can typically outrun. Turtle Island is nimble enough that emergency evasive maneuvering and dodging bombs is a thing you can actually do.
It's thrusters are completely undifferentiated, so full customization of performance is available to you.
The the enormous aft thruster pack can be stripped out a little at a time if you wish to free up power for other things. 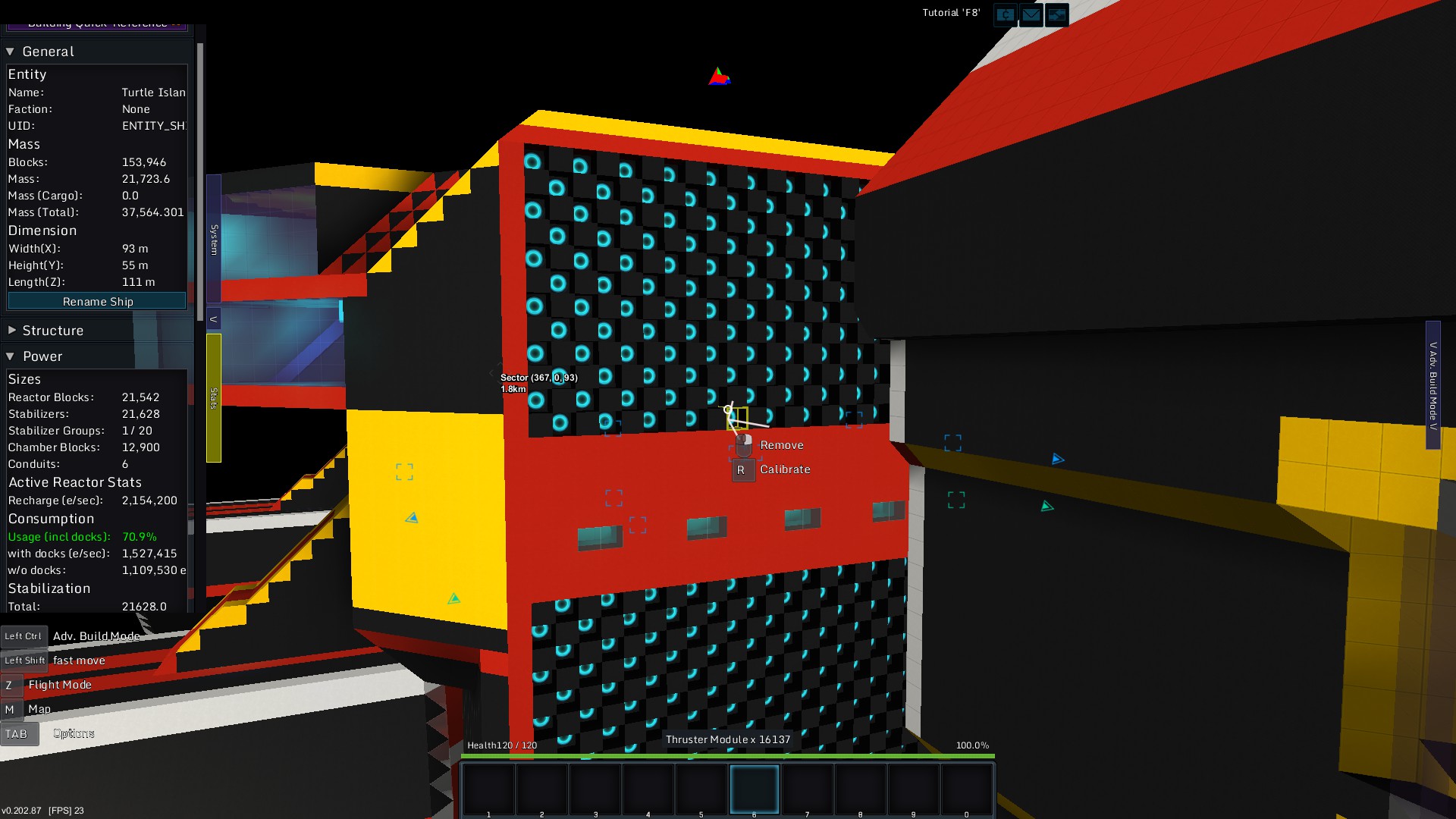 It's 'legs' are 4 Tic Tac mannable miners that have shields, armor and 22k cargo capacity each which have docking-linked storage so that after retrieval, you can just flush their inventory into Turtle Island's.

For operational security and scouting duties, a Bowtie Fighter has been provided with docking (where else?) under the turtle's throat and a Guard Dog Pocket Corvette is accessible through the aft docking port. If Turtle Island needs to run, these ships are the ninja smoke bombs you drop to give your enemies more than just one ship to think about. This, not inconsequentially, allows Turtle Island to run even faster. 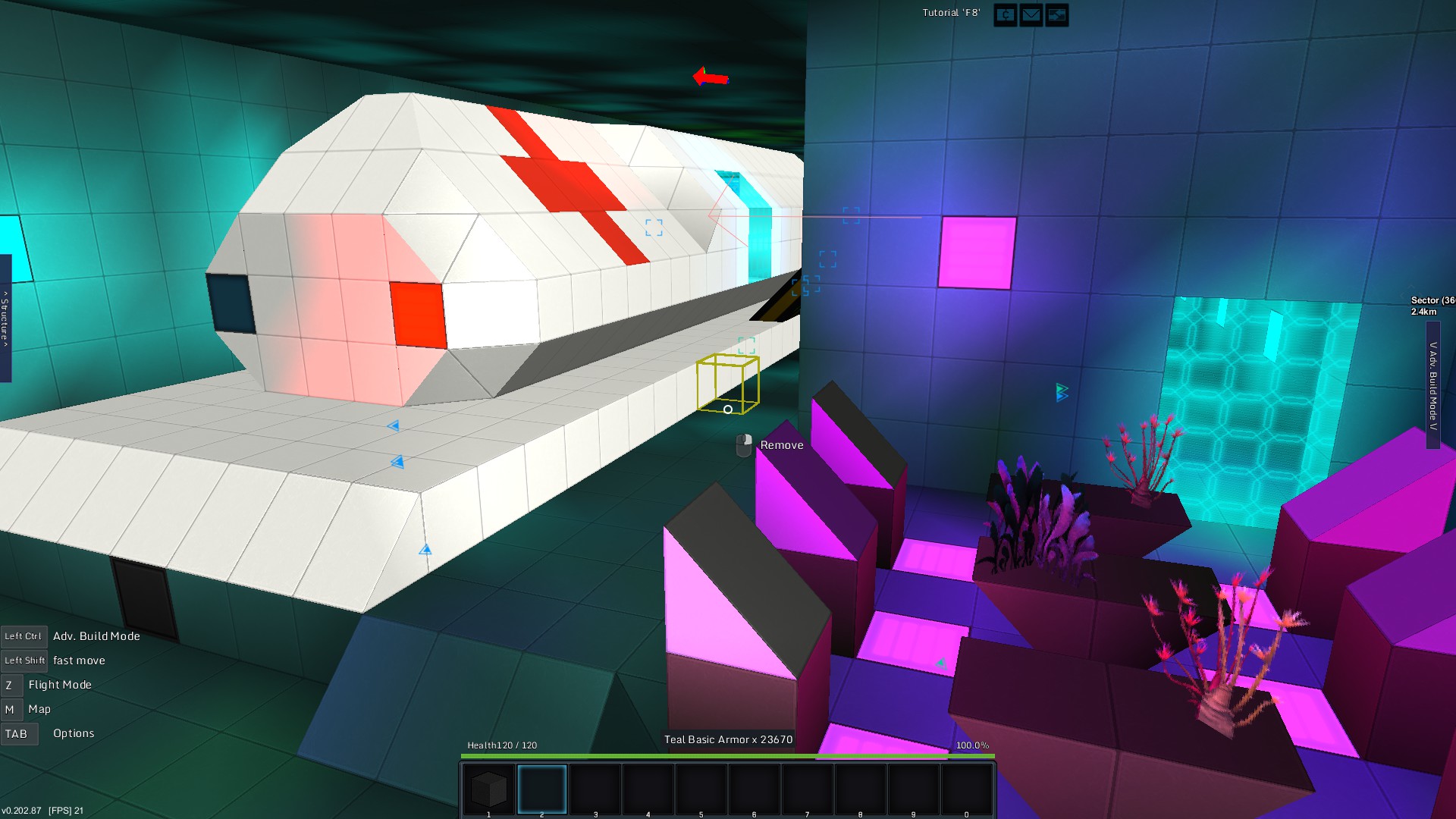 For RP fun, as well as functional rescue and repair operations, two Lil' Shaman repair ships are docked in protected bays with solid cargo capacity for larger repair jobs. They have more than enough thrust to move the extra mass and two triage beds for injured pilots needing pickup. Also, the lights flash, which I consider a must.
There's a button near the bay door for manual opening from the inside, but hotbar buttons are on the main ship and the Lil' Shamans so you can close the door after yourself. 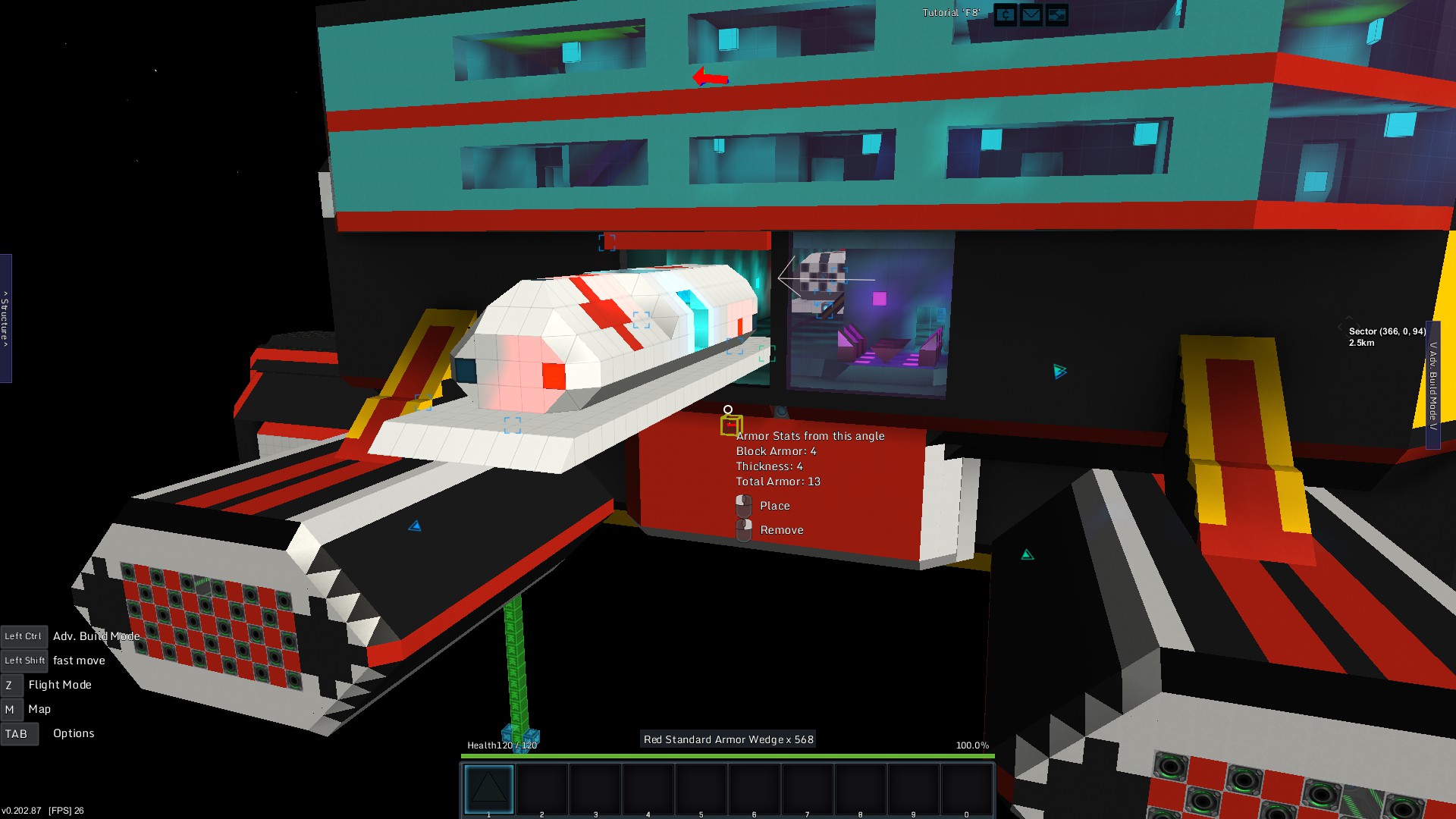 As seen above, 10 unfurnished crew quarters with lofts and crystal armored windows have been provided in the main ship. Including the Guard Dog's two crew cabins, it's 12. If you furnish the two cabin spaces on the Bowtie Fighter, it's 14.
The cargo blocks for Turtle Island's port and starboard storage lie beneath the red panel of armor seen under the bay doors, should you wish to expand capacity. However, they are sizeable as they are at 72k each.
After docking, the rescue sled platforms each stop in front of their own Infirmary, which lie on either side of the small piloting and command platform for Turtle Island. Beneath the Infirmaries are two empty rooms that can be fitted out as crew pits for the ships, filled with more cargo space, or otherwise decorated as you please. 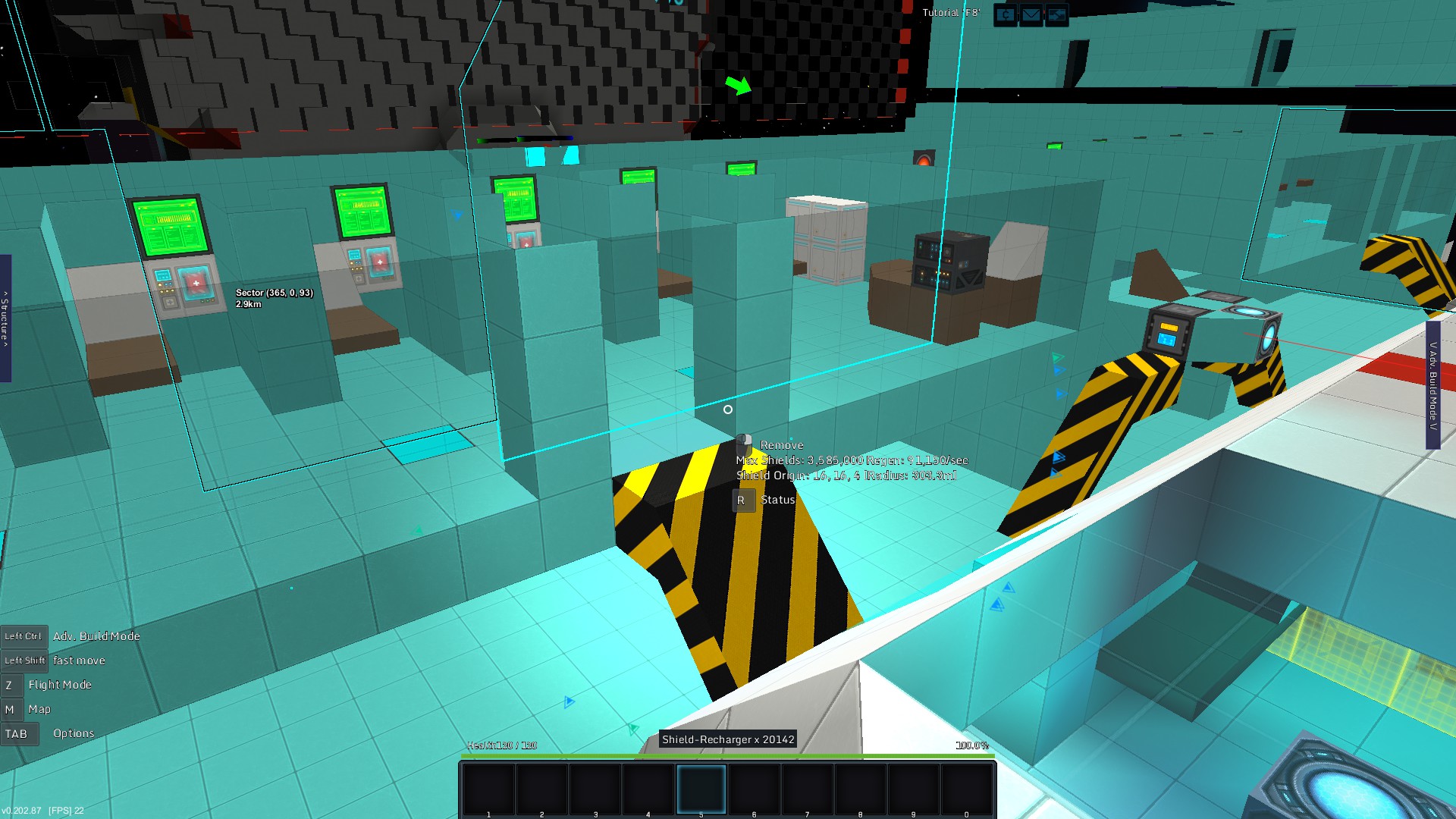 The core is at the center of the ship and the actual center of operations. The combat craft and miners can be launched with the hotbar. All ships except for the miners have wireless logic connections to their launchers and doors. The miners come equipped with wireless modules, but their rails and the Bowtie's automatically reset to the 'receive' position a few seconds after launch, so the miners' wireless modules are not connected. They were installed so that the miner can be detached and it's blueprint saved for use elsewhere. The aft 'tow-dock' operates on a toggle with lights to aid in wireless operation of the switch from the Guard Dog's hotbar.

There is a standard docking tube in the lower portion of the turtle's mouth, with the upper portion being reserved for a loading dock that can house a small shuttlecraft or several bikes of your choosing. Enjoy!

Note to the Pilot: It is recommended that when intending to fly at pan-galactic cruising speeds, you reconfigure the FTL to long-jump and the defense chambers to environmental protection, just in case.

As an afterward, I am proud to say that with further endurance testing, Turtle Island can be one tough little ship. As seen here, it took a full broadside volley from my Wolf Spider Stealth Bomber and all of it's systems stayed up, with the ability to continue a speedy retreat intact. It took a full 4 bombing runs of hitting the ship with eight 900,000 dmg bombs each run to finish it off.
In real escape and evade scenarios, Turtle Island would never be that easy to hit with bombs, but it is comforting to know that you can take some punishment if you have to. 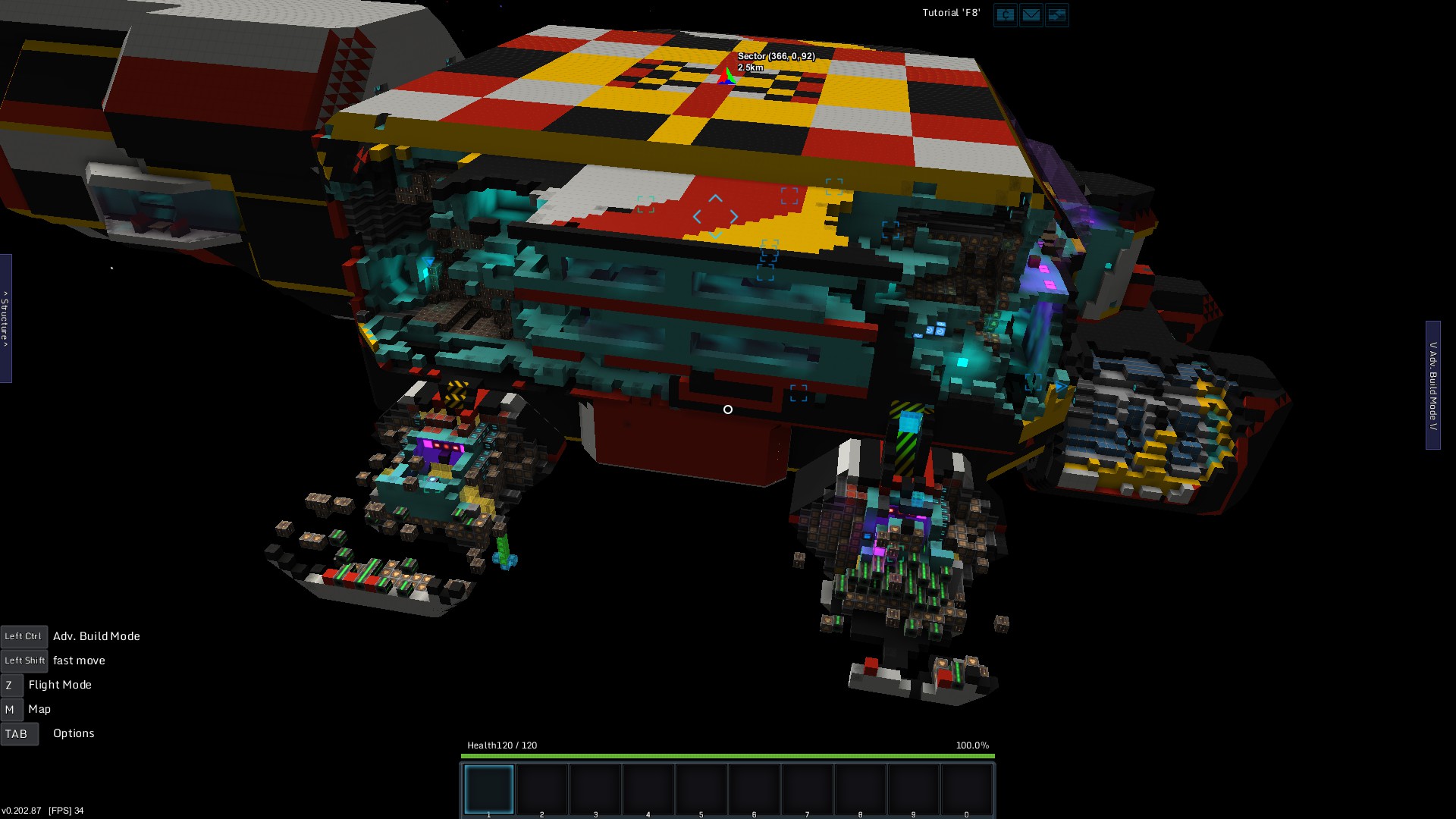