Presenting the very first serious shipyard I ever built: PetroFlux H56 Refueling & Repair - an industrial oasis in the ice-cold desert of outer space.

The main focus of this shipyard project was to achieve a raw industrial vibe - this aesthetic purpose is fulfilled by its robust steel framework, its giant fuel tanks, armored pipelines snaking everywhere, an army of robotic arms, and an all-around utilitarian style.

After a lot of intermittent work, spanning five months back in 2017 (then rounds of modernization in May 2019 / October 2021) it turned out to be a StarMade creation with an outstanding level of construction quality and roleplay value, if I may say so myself.

But it also offers a lot of practical functionality: large shipyard area, huge storage capacity, lots of rail mass enhancers to allow for heavy ships to dock or be built, an ocean of shielding energy, and serious turret firepower. 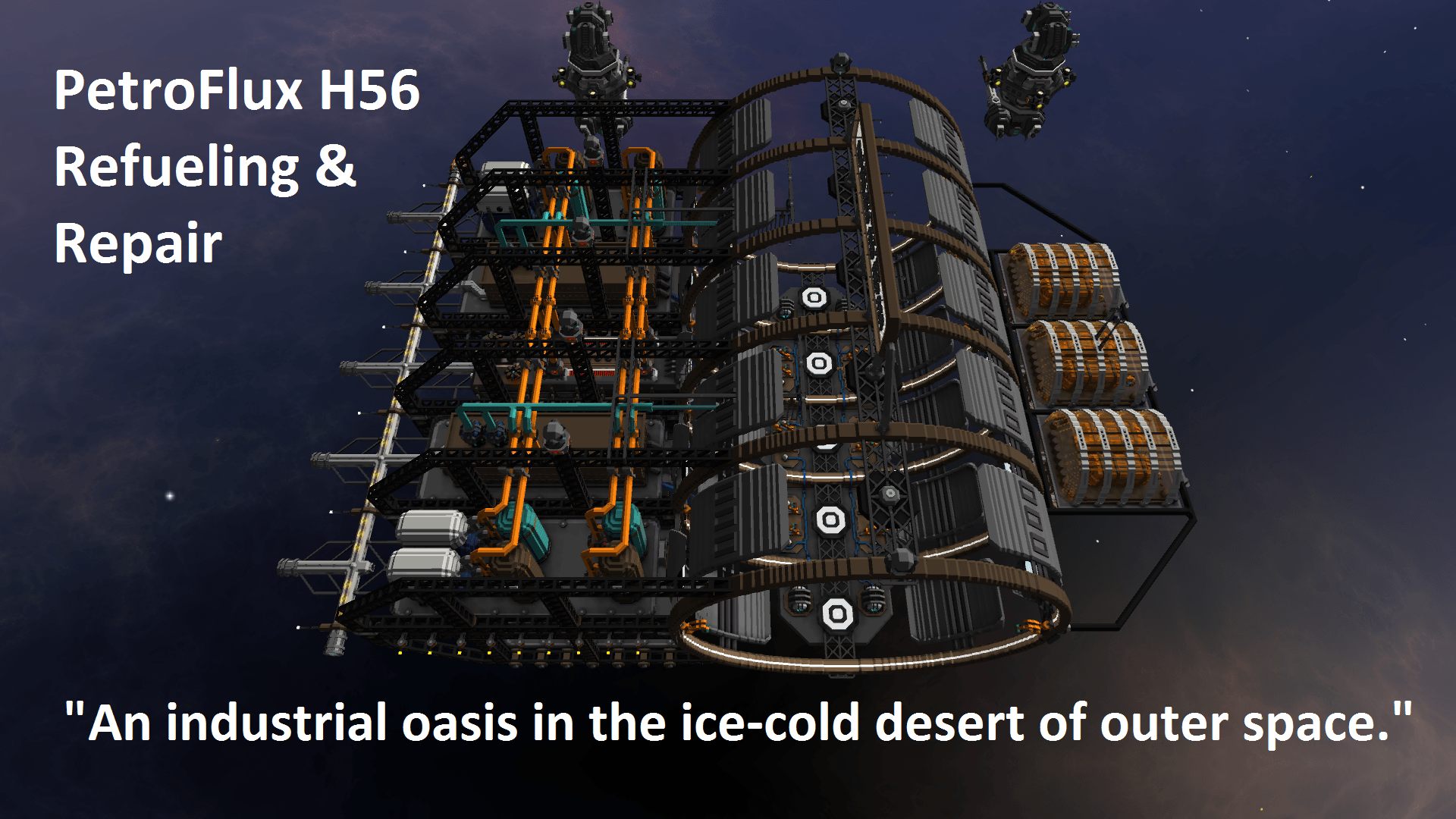 DeepspaceMechanic
That sounds so good... Thanks :D
Defiantly my favorite station I love how it has good defenses while also having other great features, but one question what is that station in the background of the third picture?

DeepspaceMechanic
Thanks, I'm happy to hear you say that it's one of your favorites! - That other station in the background is a still unfinished rocket fuel refinery station, called "FrozenOil R39". You can see a few teaser clips of it in the video I linked here, starting at 3:50 - https://www.youtube.com/watch?time_continue=231&v=hBwikRMQleo
It's got an industrial factory/refinery sort of look which is pretty neat. I tend to prefer a more anime/sci-fi style but you make this work so well. The station seems simple from afar but up close it has a lot of really excellent detail work. Does your Magmatron miner fit in the shipyard? If so, I'd love to see a picture of the two builds together.

DeepspaceMechanic
Thanks for the review, good to know it's appreciated. - I actually share your preference, a sci-fi style suits a space station much better than an industrial, but an industrial theme has something uniquely attractive to it too, if done properly. That being said, I hesitate to say that I nailed it. The layout of on-foot working places are kind of poorly planned and unrealistic.

But thankfully, this project yielded a large assortment of detail templates, including the huge tanks, the pipelines, the AI robotic arms, etc. Those will make the construction of much nicer industrial stations much easier. And yes, the Magmatron miner fits easily into the shipyard space, will make a screenshot once I'm around there, but an even sweeter scene would be the one with Magmatron docked to a serious mining base station that I'm planning to build once time permits :)
absolutely beautiful! Every detail makes sense and visual purpose,everything looks like its ready to start moving and repairing! Top stuff!!

DeepspaceMechanic
Thanks for the positive review! It's always nice to hear that kind of appreciation after building a project for several months. I worked on it rarely, just a little every time, so I lost the initial excitement about this station, but seeing others' positive reactions feels good.

And yes, some effort was made to make many details look realistic and functional. Most notably, the refueling pipes can be moved into or out of the shipyard's building area, and all those little utility ships would be a must-have too if this was a real place where large ships are made/repaired :D
very nice ^^

DeepspaceMechanic
Thanks, I'm glad you like it! :)
Read more…
Top Bottom