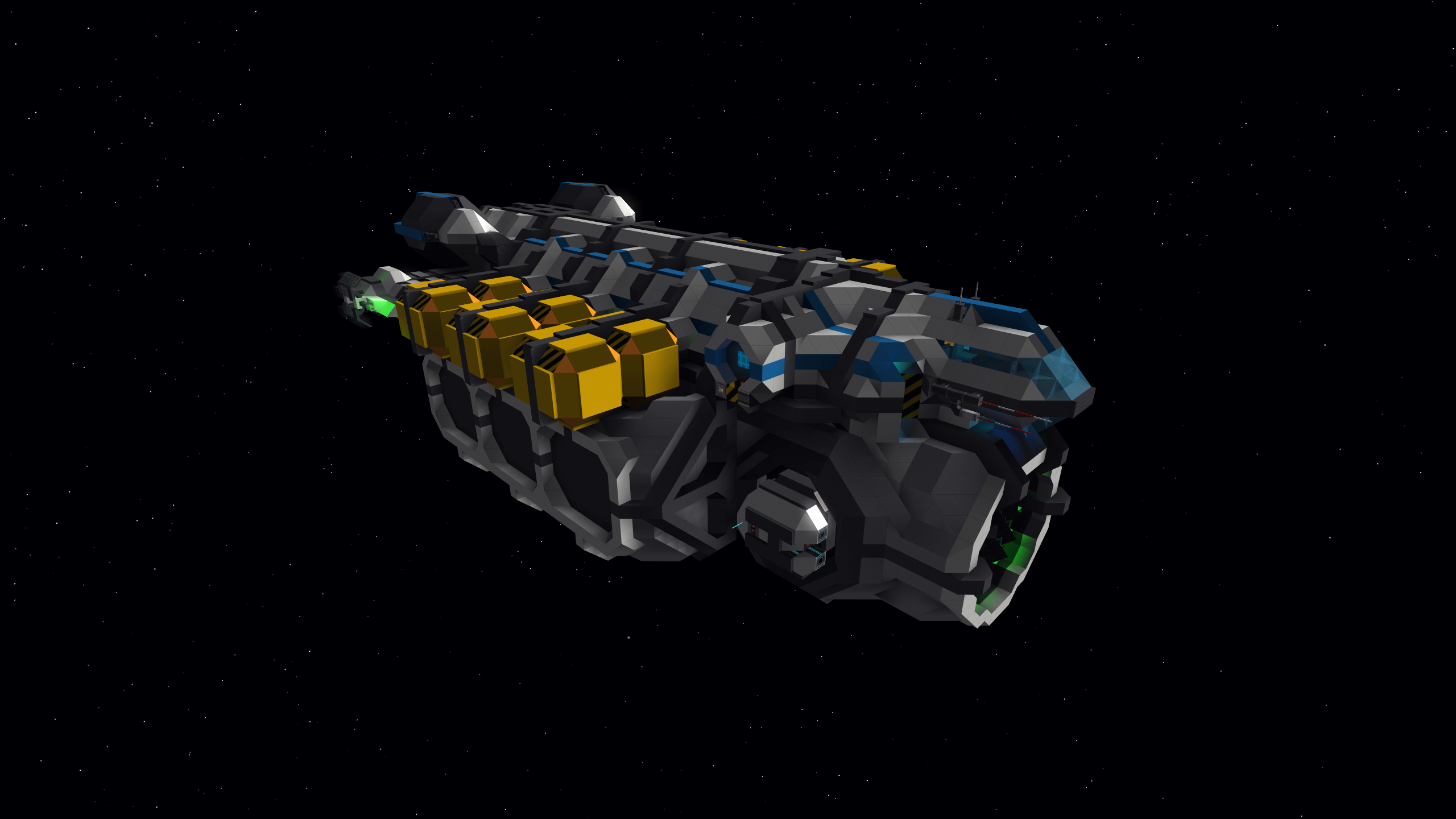 A small mining carrier with 6 drones and an on board salvager.
For those players who would like to experiment with drone mining, this is an efficient, inexpensive little miner with lots of cargo space and an RP interior.
I've tried to keep the ship simple yet fun to use. I have left a lot of the cargo unlinked for visual effect. Link it to the storage as needed.
Drones will need their Load/Unload settings configured individually as that setting is not saving in the current release.
Reactor Alignment (40,45,0) 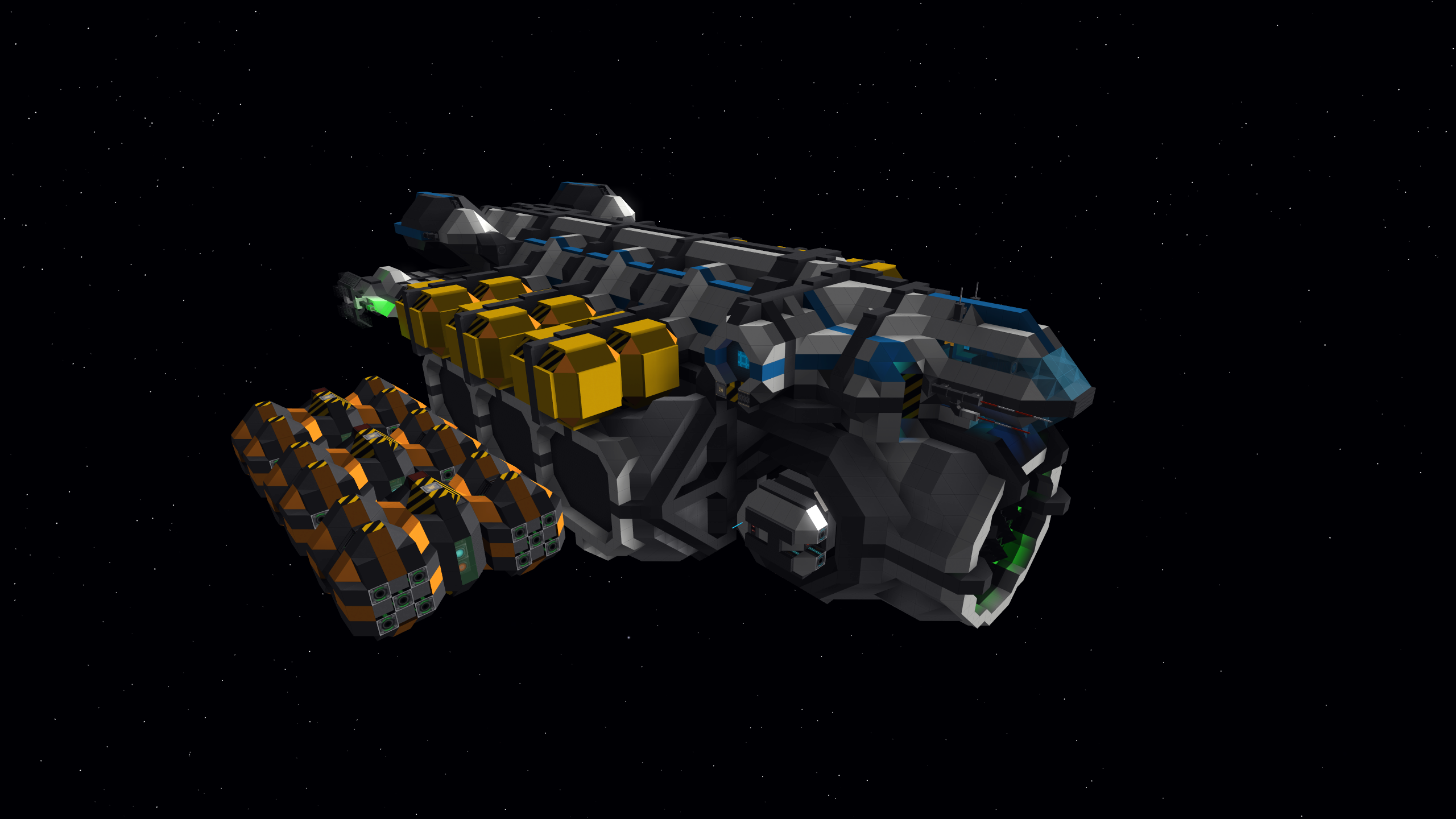 EDIT:
This ship needs to have it's chambers adjusted between traveling and mining due to power restraints. For traveling, disable the logistics chamber and select the efficiency chamber to 2 or 3 and whatever other FTL chambers you like. FTL power draw is obscene so it will still overdraw power but it will charge none the less. For mining, and short hops between asteroid sectors, set the FTL to efficiency 2 and the logistics chamber to 2. Drones draw power when docked so make sure they are launched and wait for the FTL to charge. (FTL auto charge is currently broken so you have to wait for charging.) This setup enables the salvager to fire without overloading the power system as long as you are not on the thrust constantly and have let the FTL charge.

On the right side of the reactor under the cockpit. Replace the FTL chamber on the bottom right with a Logistics chamber as shown and set that chamber to power boost. The extra FTL chamber was realistically not really usable but I've found in my testing that the extra power boost helps with charging the FTL so you can get on with mining. I didn't think it was worth bumping version numbers for this so those who are interested can make the change manually pretty easily. Cheers.
Reactions: onyx0117, Lord Daro, SlavSquatSuperstar and 4 others

Great ship, works well and looks good to. Use this a lot. Thanks
I love the look and design but I actually want to give it 3.5 stars as the power is quite unbalanced. when i use the native mining array it blows the power over. With some tweaks to power priority or reactor optimization you may be able to quench the crazy consumption of said beams. As far as carrier logic goes, it's nice and compact. Sure connections typically don't save, it happens with my mining carrier too so that's not my concern. If you could optimize power so ftl and mining can charge nicely that would make this ship ideal.

MrGrey1
Yes it is a little under-powered. I forgot to put that in the description due to being frustrated with the logic issue. You have to adjust the chambers between traveling and mining. I added extra chambers to accommodate this. If you set the mining chamber to 2, put the jump drive to efficiency 2, make sure your drones are launched so they're not sucking power then the mining beam is easily sustainable after the drive has recharged. Jump drive unfortunately for carriers, is a real pita as all your cargo space puts the power requirements way up. I may look to refitting it with a larger reactor but I was trying to keep it to a 199 for efficiency's sake and was happy with changing the chambers myself as needed. I'll edit the description now that you've mentioned it. Thanks.
5 stars because it is the best mining ship in CC.
It has a better look than the previous mining ship of that size you uploaded and when drones don't work, there is another use for that space/installation in combat drones or for cargo containers or whatever I want.