MeRobo said:
Yeah, I hope I get the best results possible, especially for those which need a bit more reshaping. However, I won't touch these befor the weapons update comes close, because refitting ships for two updates in a row is nothing I intend to do. I also hope the refitted versions (once they come about) will be okay with the devs as refits of the fleet submission.
Lastly I want to thank you for your friendly words about my ships.
Click to expand...

Although I wouldn't worry too much about making them the best of the best in terms of functionality. I remember during the first fleet contest (seems like a lifetime ago now!) the Devs were more interested in character through strengths and weaknesses rather than excelling at PvP.

MeRobo said:
Nice idea, but doesn't really fit my idea for a naming pattern. However, when I come up with lore for these (I want to make these into a custom npc faction) this one will get the nickname Little Gun, eitheer because there's a bigger gun or as a joke
Click to expand...

Will you upload it when you're done?

JinM said:
Do you think that Shine needs an alien faction though?
Click to expand...

The fleet was one of the 70 something fleets which won the fleet submission (and not the only alien looking one), so I think yes, Schine needs, or at least wants alien ships in the game.

Blodge said:
Although I wouldn't worry too much about making them the best of the best in terms of functionality
Click to expand...

I don't intend to minmax them for pvp, however, I don't want them to get blown up at the first hit. The "best results" were mostly ment in terms of aesthetics.

Captain Skwidz said:
Will you upload it when you're done?
Click to expand...

JinM said:
Same here man, I am only refitting the ships I really need to play the game right now. The others are all in the old still.

And good luck with the fleet submission.

Do you think that Shine needs an alien faction though?
Click to expand...

So you dont think Starmade needs alien ships?
And good luck with a fleet submission thats already accepted?
Are you on something you shouldnt be?
Reactions: MeRobo

So I spent a little time building today, however, I deleted most of what I built today because I was unhappy with what I came up with. This building was done on a ship originally not intended for CC, hwever, my plans have changed. Let me introduce you to the Gjomskhor, aka Yomyom, a ship inspired by the aggressor class (see picture below).

Now on to the Gjomskhor. The general shape is mostly final, although the front part of the bridge is still missing. Most of the detailing needs a revisit because it turned out less nice than I originally hoped it would. 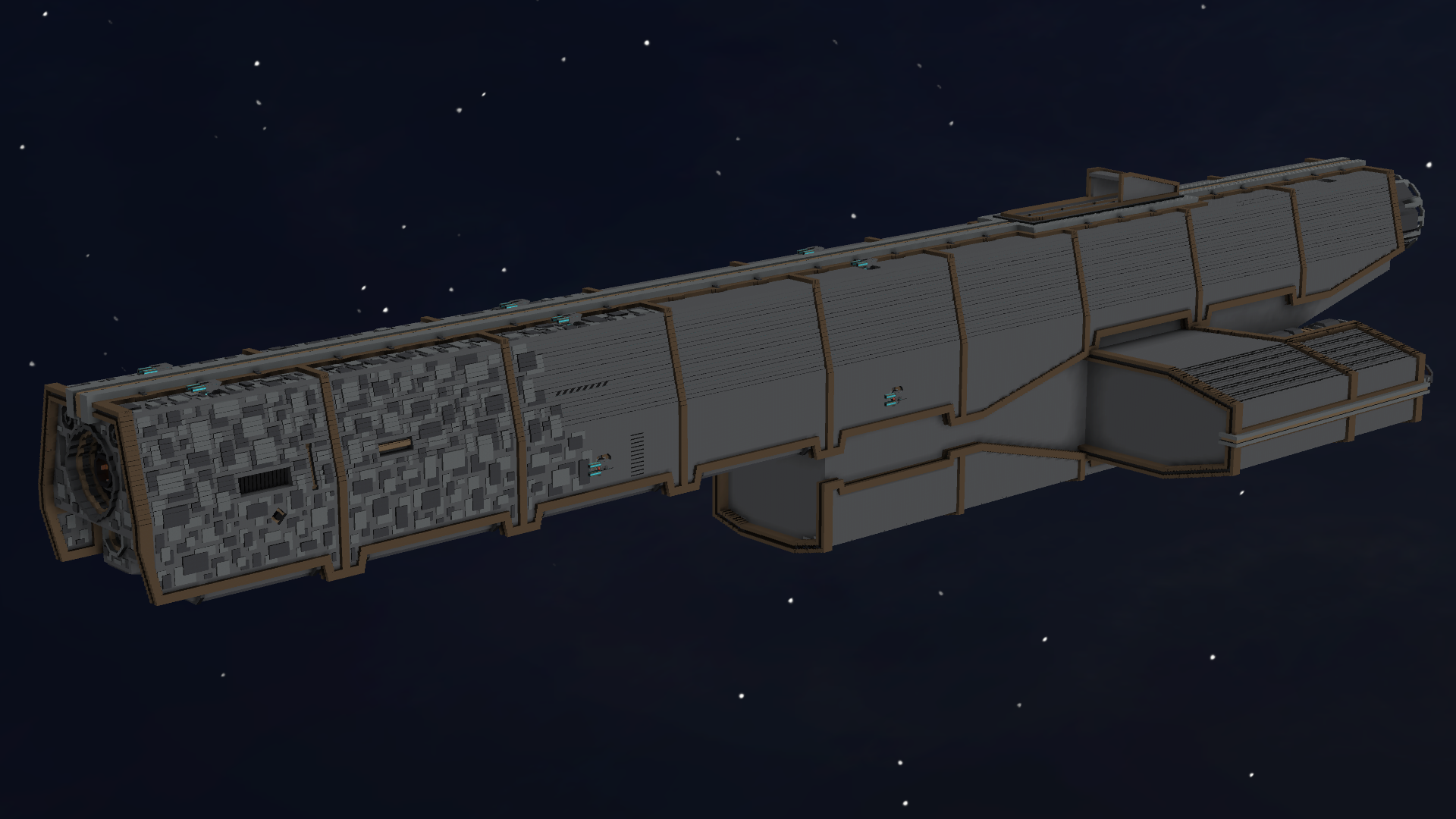 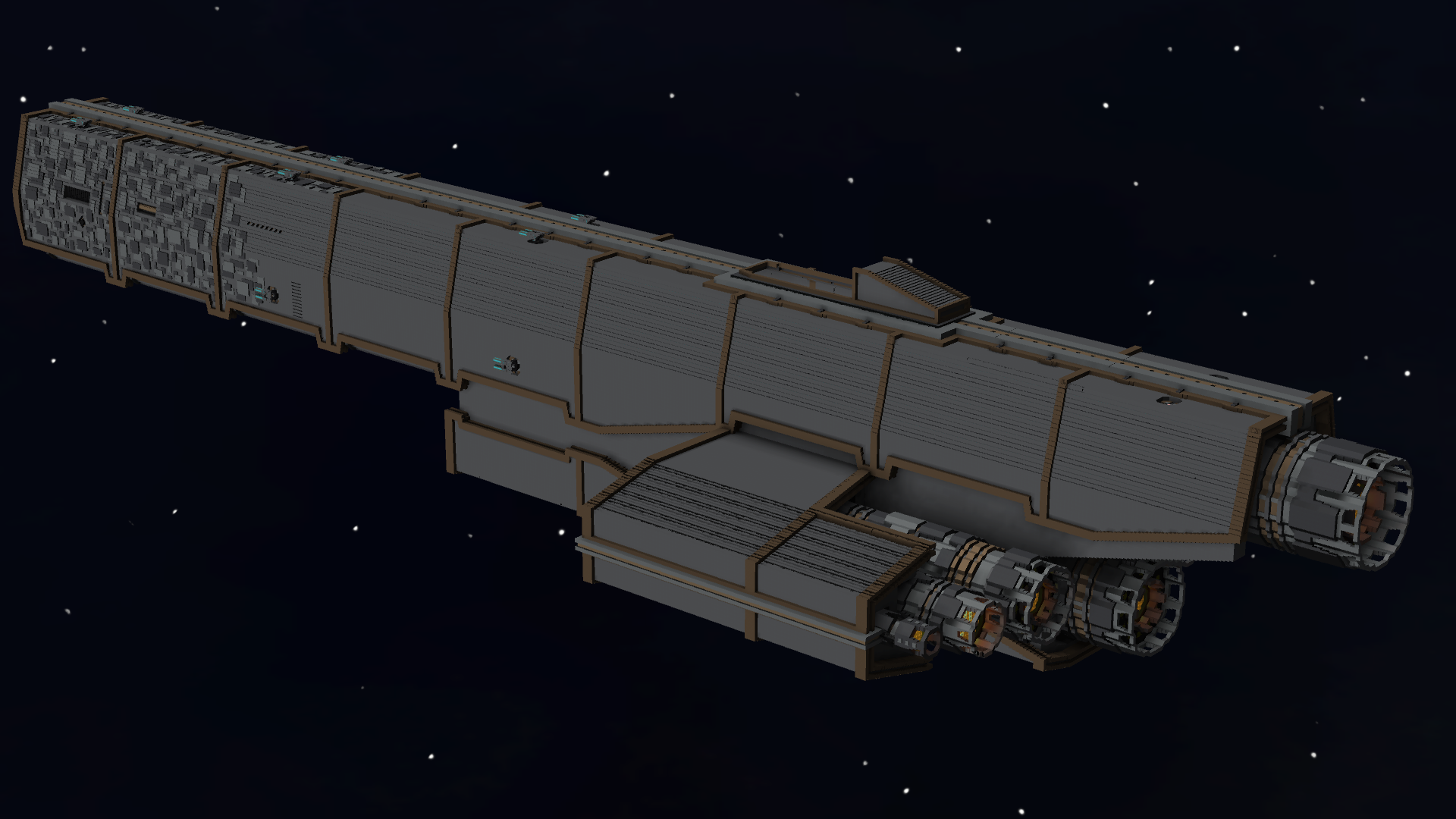 And finally, a nicer pic of the engines (although a bit older, as can be seen by the missing bridge part). 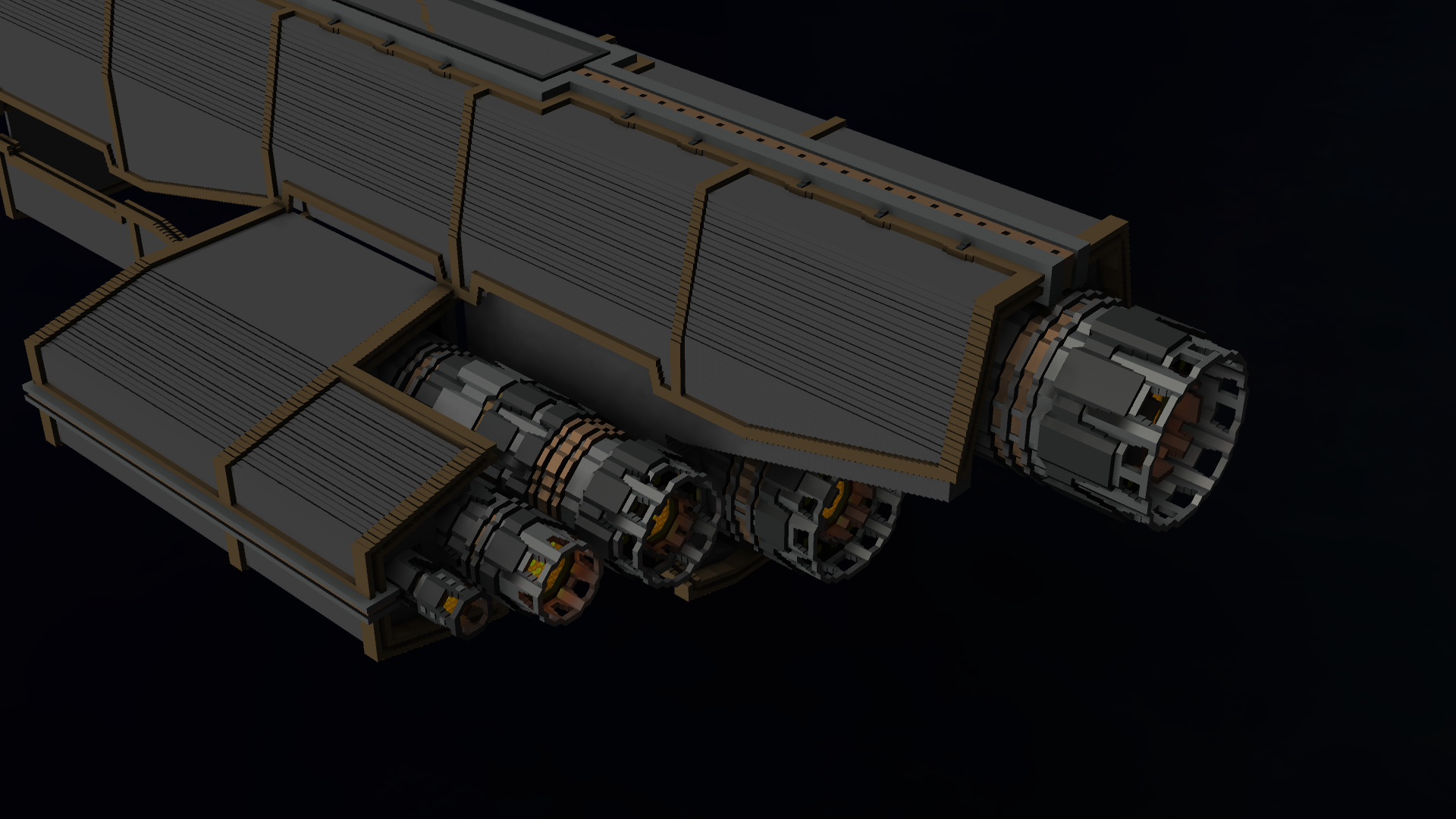 I hope nobody grows to fond of those very noisy looking plates near the front, as they will change quite a bit.
Reactions: Rumcajz, darknassius, Lord Daro and 10 others

I threw together a thing within a few minutes, if anyone wants I'll put it on CC.

MeRobo said:
Engines with different ammount of Plume (from none to full) 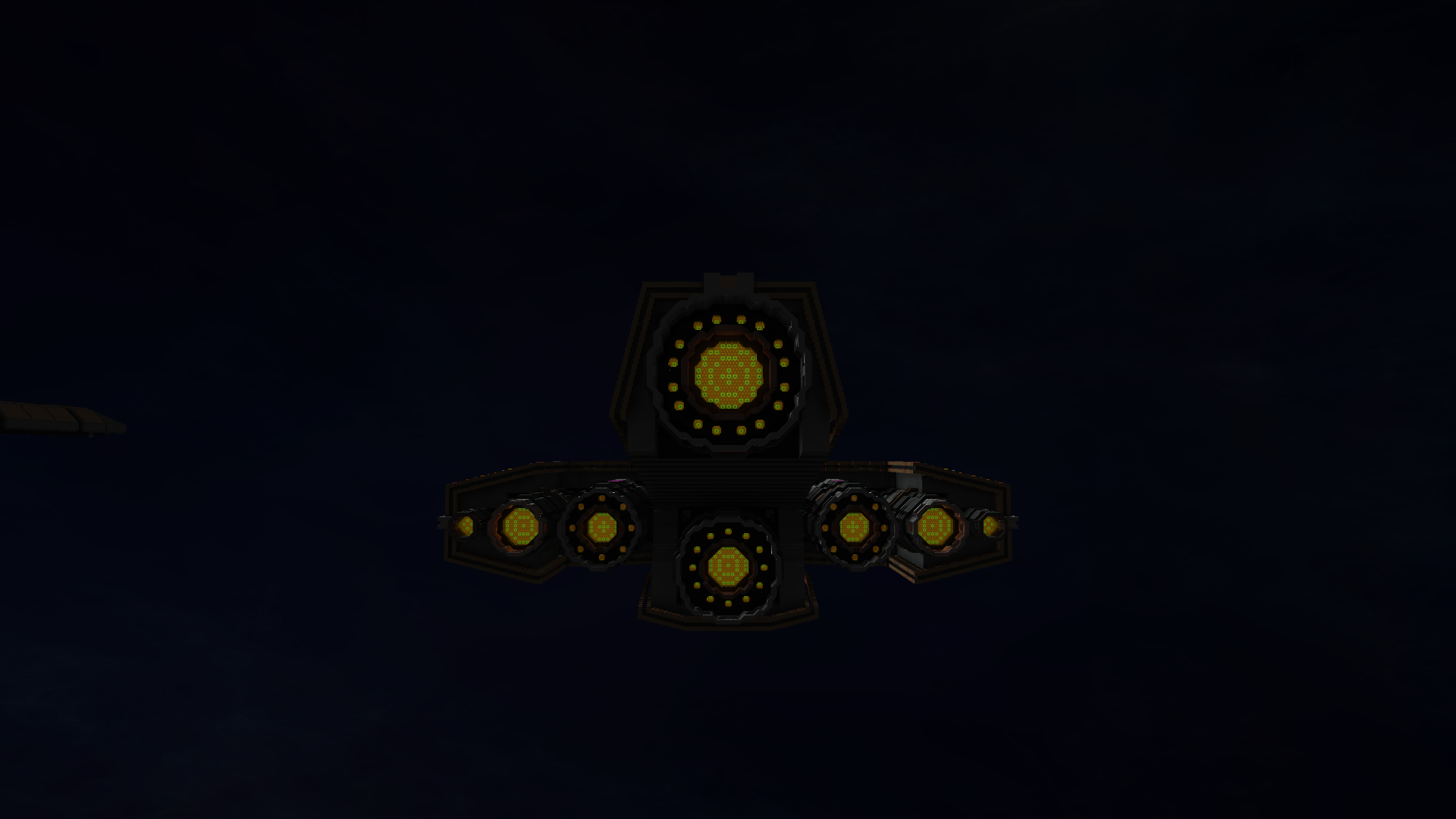 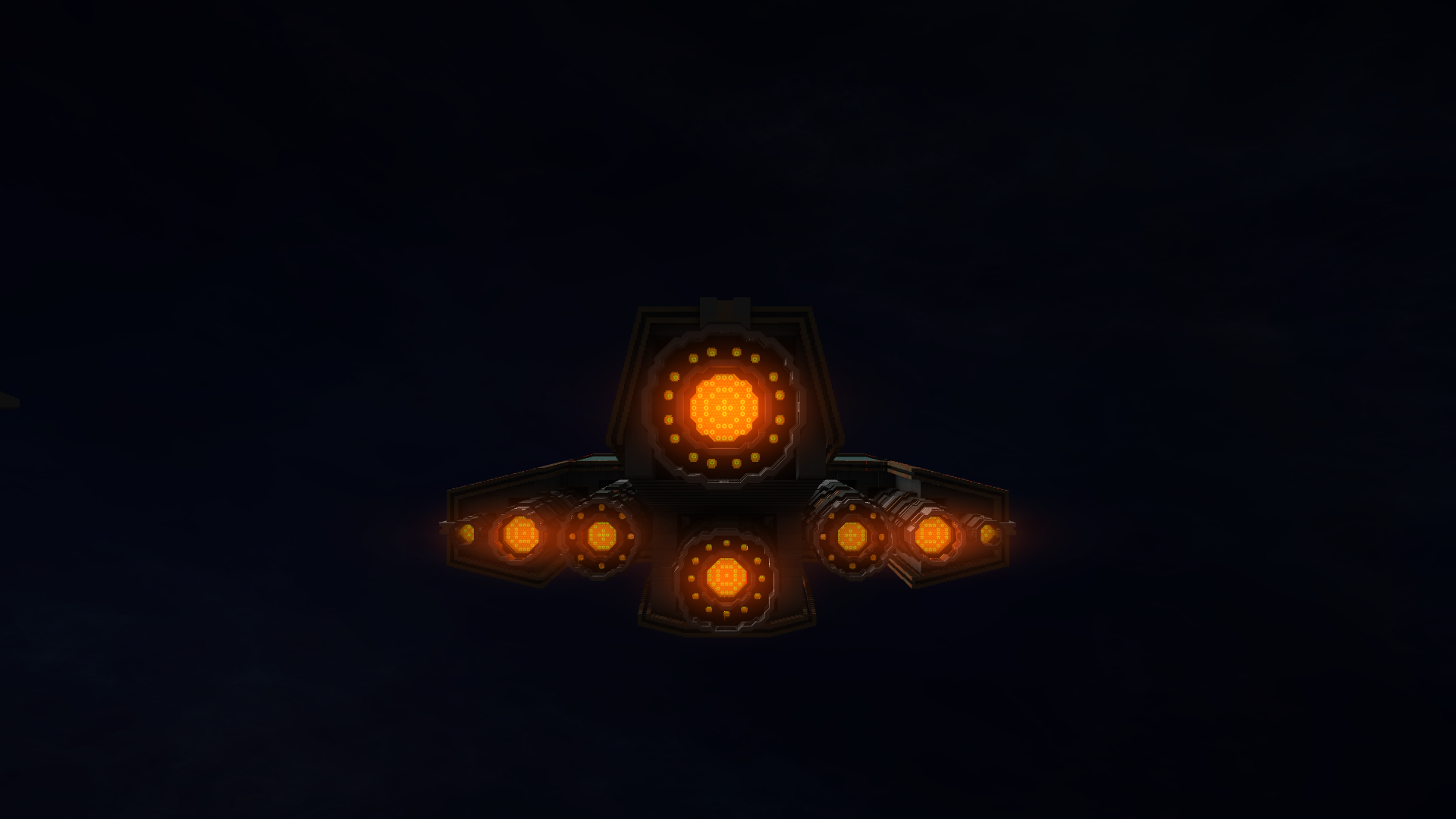 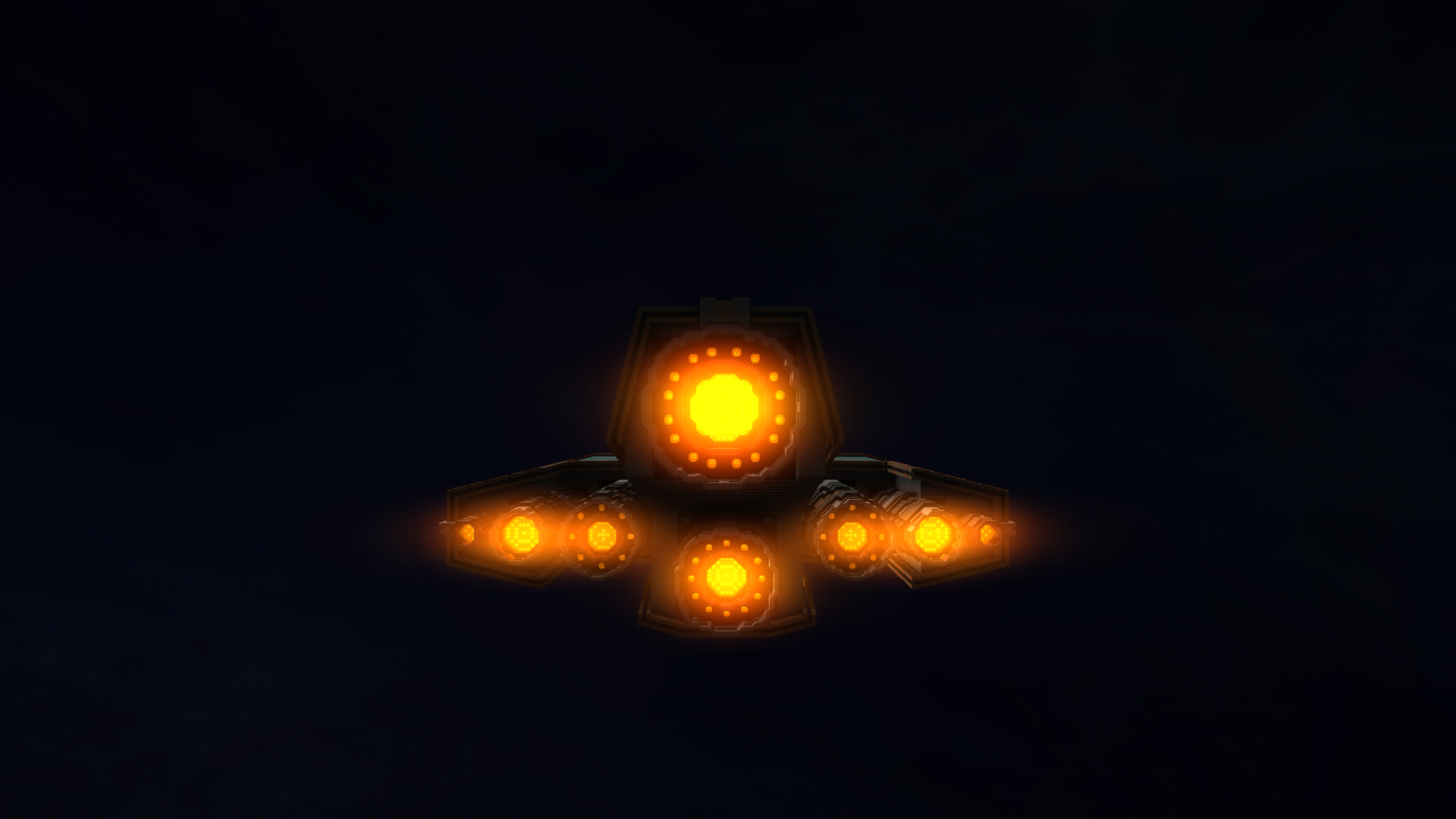 I also could dig up some more pictures I have of them if you want more.
Reactions: DeepspaceMechanic, NuclearFun, Blodge and 1 other person

Sexy! is that thrusters displaced a block back from yellow force fields?
Reactions: MeRobo

Yes, also the yellow forcefield is what sets the plume colour.
Reactions: Blodge

Necromancy! (Or something like this).
Haven't been much "lately" (well, technically i have been since the weapons update came out), but I have a few things in the works.

Let's start of with the oldest, namely something I begun pre weapons update. It is large and as usual for large things I started of with a core room (which is what you see in the screenshot) and will take ages to finish it (yes, I know I have 2 large wip things I teased in here). 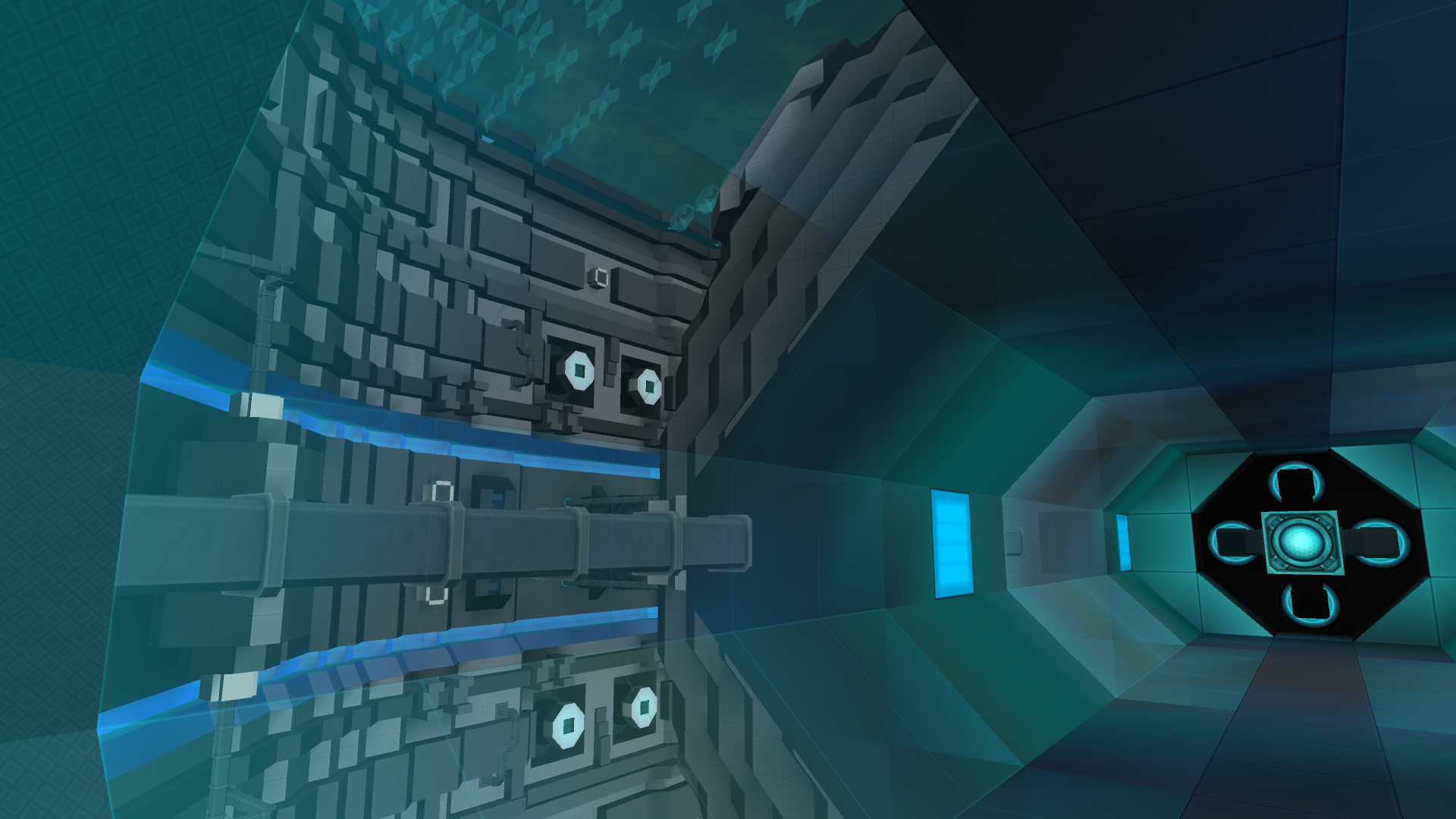 The second thing is something a bit special and I'm not sure whether I'll release it on CC, but I thought I'd put it in here as well in case I'll ever finish it, screenshot is a bit outdated, some of the progress you can't see I'm not particularly happy with. 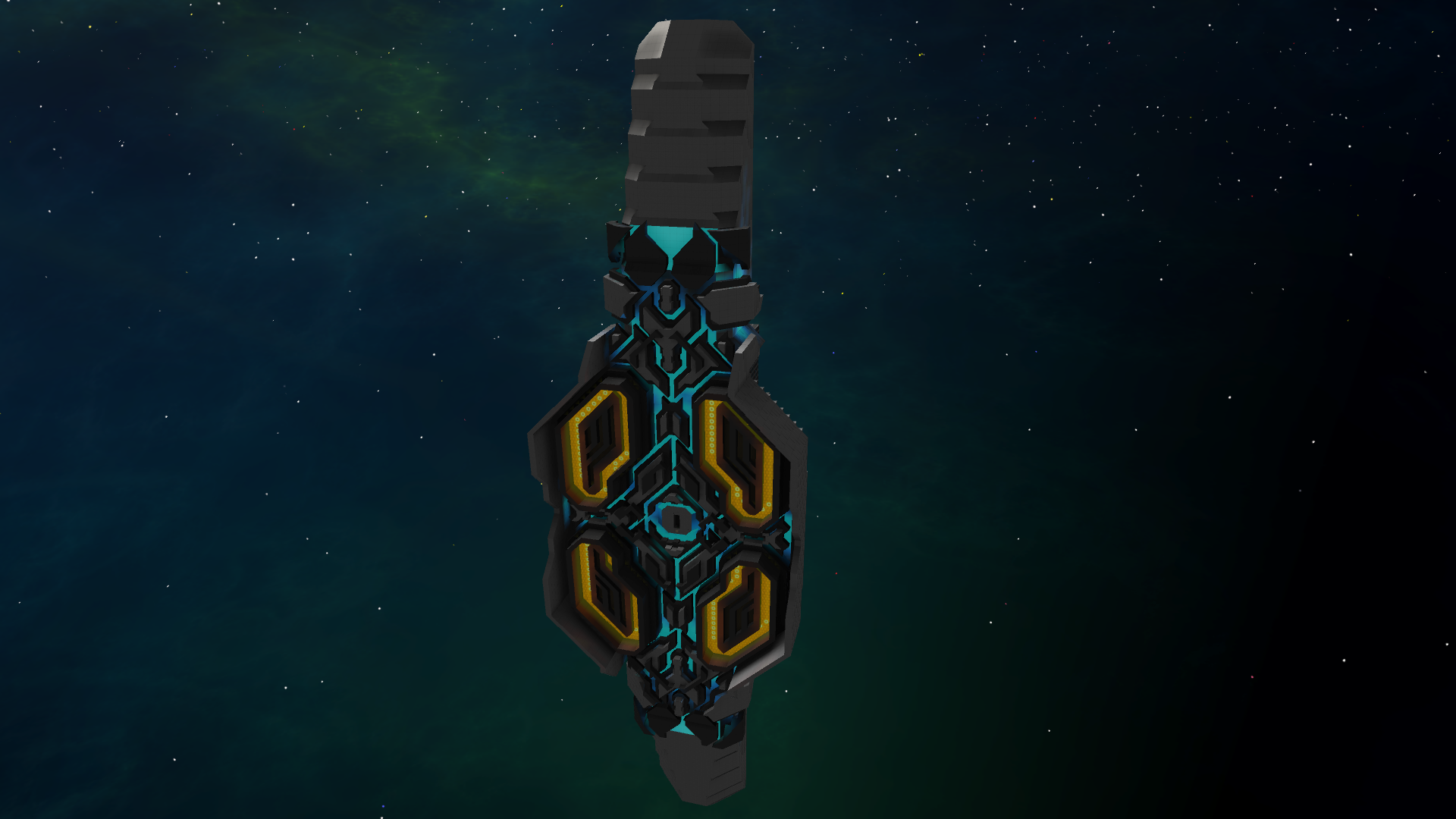 And there actually is a third thing. No screenshot though because I have none that really look nice imo. However, this mysterious third ship is most likely something you'll see appear on CC in the forseeable future (Although I can understand you being skeptical about me actually finishing something intended for CC).
Reactions: Rumcajz, darknassius, jontyfreack and 2 others

That ship features so splendid slab-work that it's outright inspiring! Makes me want to go right now and try to build something big that relies mostly on slabs and as few wedges/tetras/heptas as possible to achieve a good shape.

I particularly like the protruding brown framework thing with the obtuse angles here and there, really eye-catching, great job!

And after taking a closer look at those engines on the close-up shots, I must say, they're hands-down the nicest engines I ever seen in StarMade... Such a nice design and so clean execution!


Also love that core room in your latest post. - Have fun finishing these things, they sure are Master Builder-level stuff!
Last edited: Jul 14, 2018
Reactions: MeRobo

So a lot of these screenshots are a bit older, before the changes to the colour palette. Here is the Gjomskhor as it used to look (1st picture) and as it looks now (with some changes to the side bits housing the engines), not sure what to think of this change. 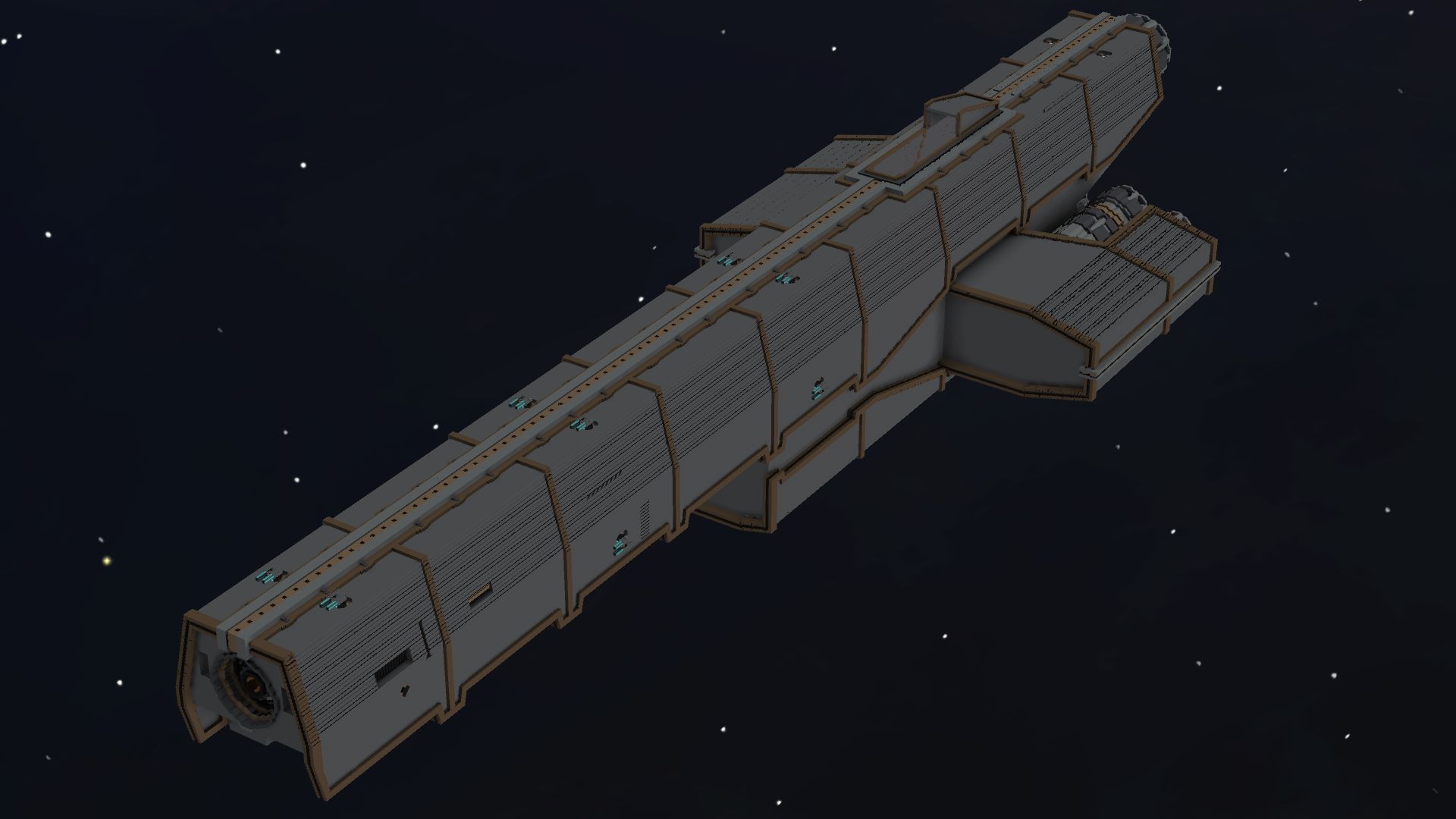 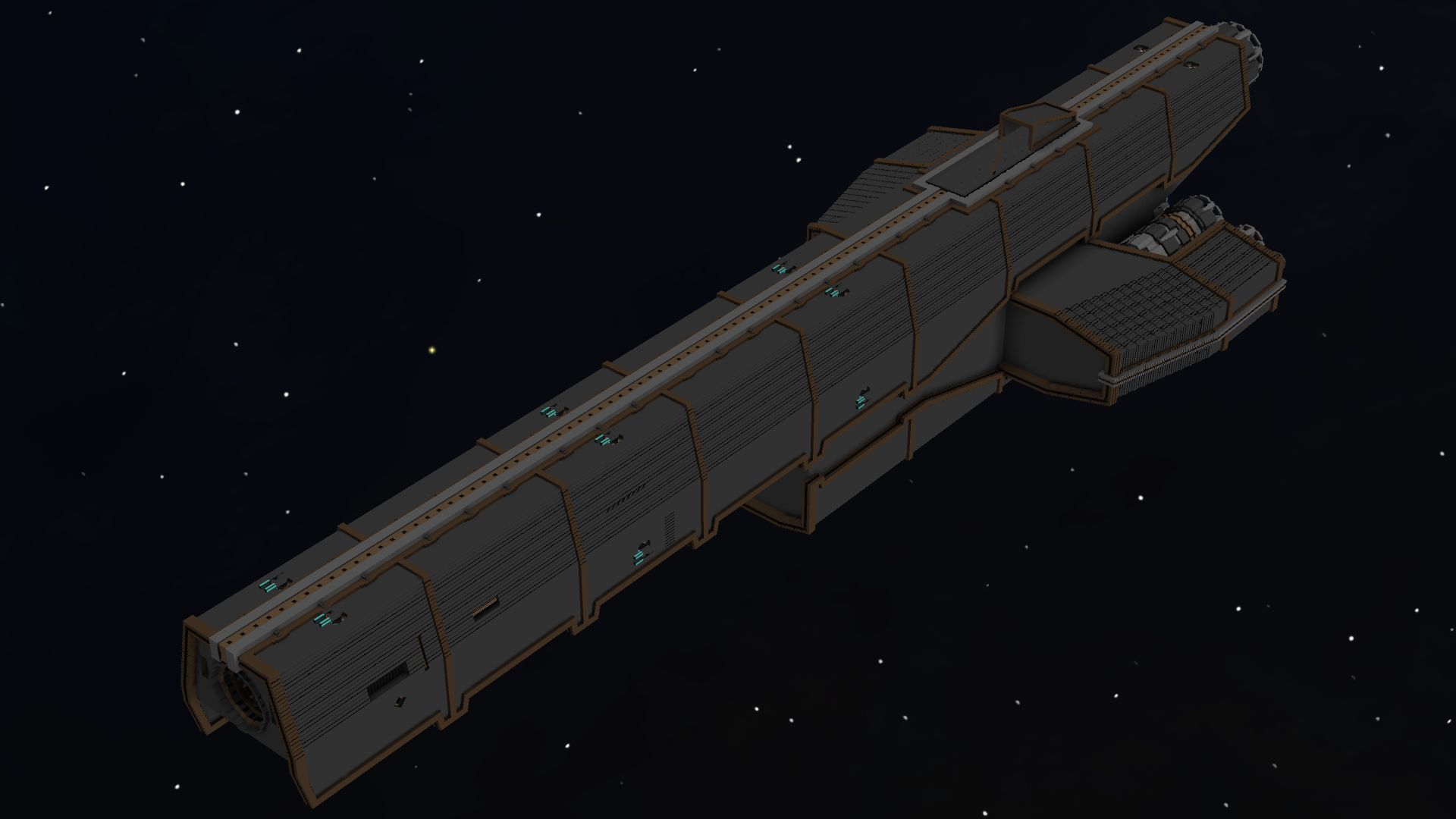 I think the additional contrast works out very well. I know that you are used to the lighter theme from the old textures. You have to decide yourself if you now switch out the hull to make it appear lighter again. Now it feels a little bit more rusty, mechanical and menacing. The older textures felt more modern and streamlined, high tech like (even though I think for the high tech feeling you need to go even lighter).

JinM said:
I think the additional contrast works out very well. I know that you are used to the lighter theme from the old textures. You have to decide yourself if you now switch out the hull to make it appear lighter again.
Click to expand...

Switching to grey basic wouldn't work out imo because than the entire nship would be too light. The ideal shade for dark grey basic for me would be somewhere inbetween the old and new shade. Maybe I'll try replacing the grey standard with something else because right now I'm not sure whether like how much it sticks out.

MeRobo said:
I threw together a thing within a few minutes, if anyone wants I'll put it on CC.

Now with weapons 3.0 out I refitted this into a little bomber and put it on CC: SDM-M
Two things:
Some more up to date screenshots I already posted
Reactions: DeepspaceMechanic

MeRobo said:
In the process of previewing my CC post somehow the upload icon box got unchecked, so sadly no icon.
Click to expand...

There's an option to add/replace content icons later on if you wish. I put a screenshot in the spoiler below with the exact button that enables you to do that.

DeepspaceMechanic said:
There's an option to add/replace content icons later on if you wish. I put a screenshot in the spoiler below with the exact button that enables you to do that.
Click to expand...

Thanks a lot, icon is now uploaded
Reactions: DeepspaceMechanic

I made a thing (And a CC release version of it) and, you guessed it, it's not what I anounced in my stupidity. It's something bigger though, so I hope that makes up for it. This is what probably can be labled a CC refit. Hope you like it.
iSBAD class destroyer
Reactions: jontyfreack, DeepspaceMechanic and Nauvran

So, I started out on an idea I had in my head for more than a year, namely turning the barrel of the 116-2 into a turret. Not finished, but here is the beginning of a turret too big for any ships in this style. 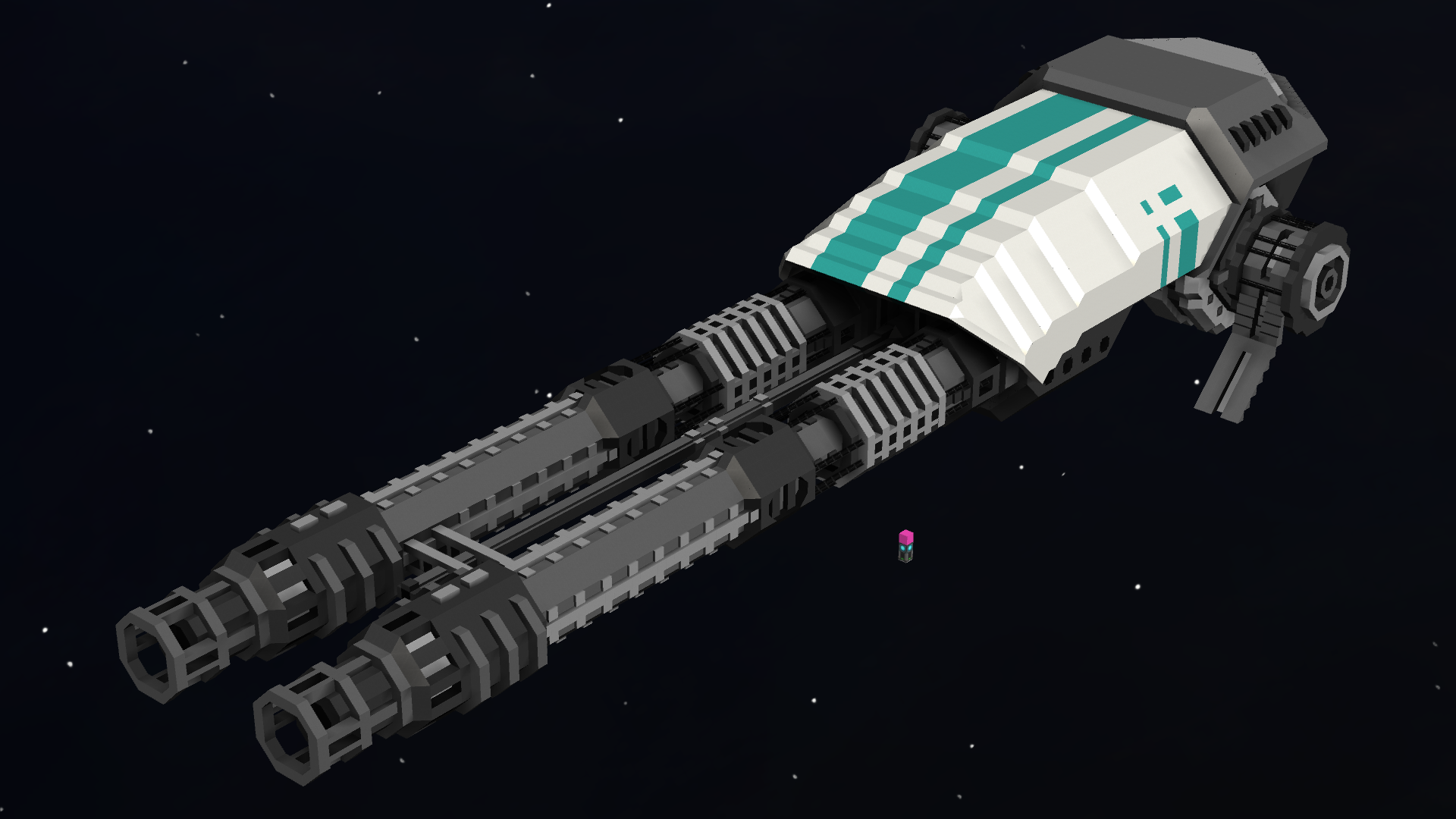