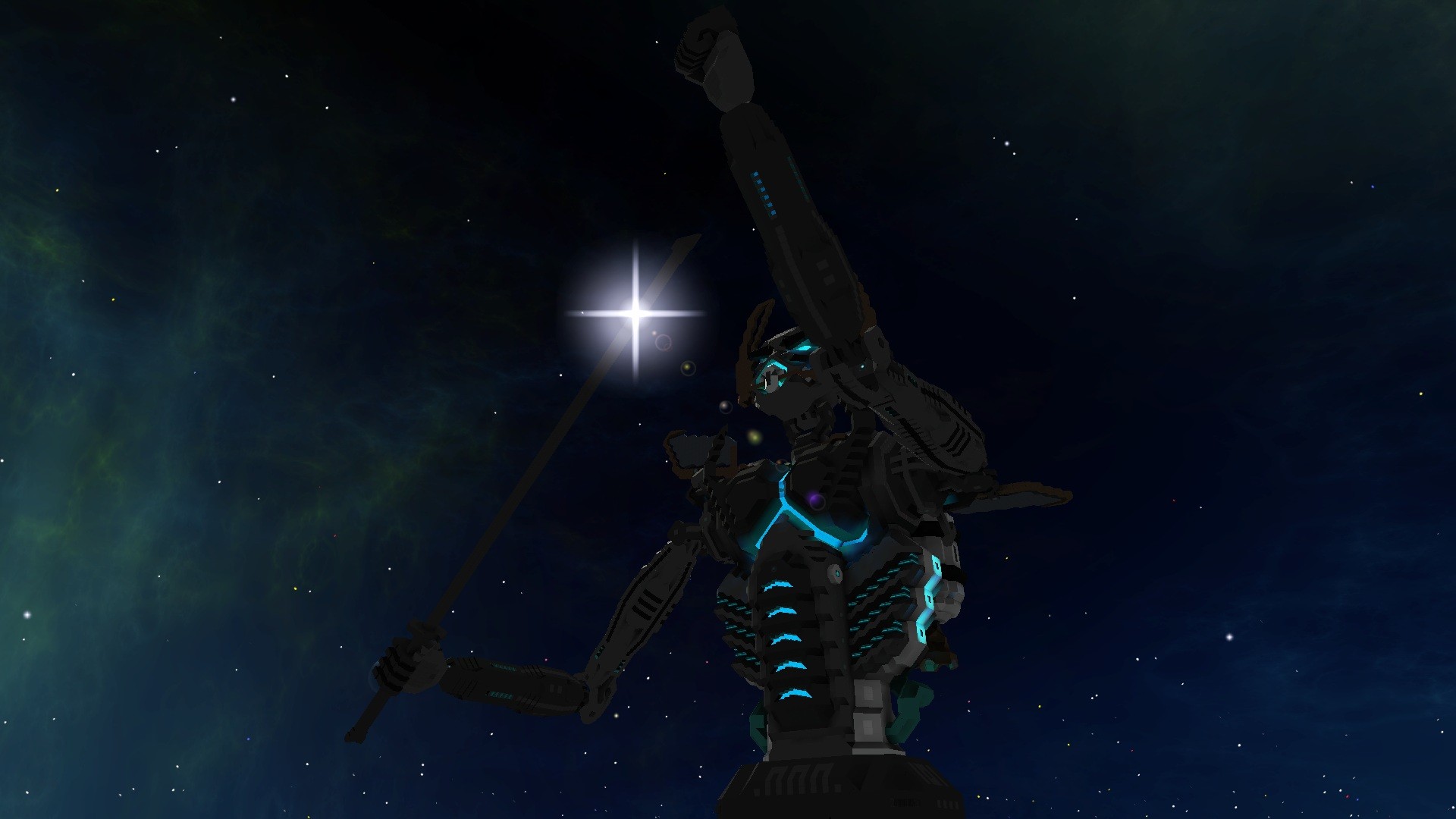 Allow me to present one of my proudest StarMade creations,

(Or you can call it Samurai J(etp)ack too, that was such a great cartoon series)​

I've been planning to build a mech ever since I saw a few really well-made ones here on the Dock. After I decided to give it a try, it took six days to finish the shell, and although I originally intended this to be a prototype, it turned out good-looking enough to become the final thing.

This mech is an original design of mine, I didn't use any visual inspirations for it. It's 184 meters tall from the bottom of its feet to the top of its head, and 195 if the horns are included. If I'm counting correctly, it has 21 joints (rotation points), all controllable from the hotbar.

Its current fun features include a razor-sharp plex door katana sword, and a cool "Wake Up!" animation. There are enough thrusters in those huge jetpack tanks to be able to fly around with non-sluggish speeds. It also has a simple little interior, and a "Nervous system room" granting access to all of its logic, so that new animations can be added easily.

CHECK OUT MY OTHER MECH TOO: KORTHEX - The Deepspace Mech


In flight mode, you will find an Inner-Ship Remote for each controllable part of the mech. These remotes are organized by category on the first five rows of the hotbar. Additionally, each hotbar row contains a "Direction switch"; clicking such a direction switch once will change the direction in which ANY body part will rotate when you signal them to move; a second click will toggle the direction back, and so on. 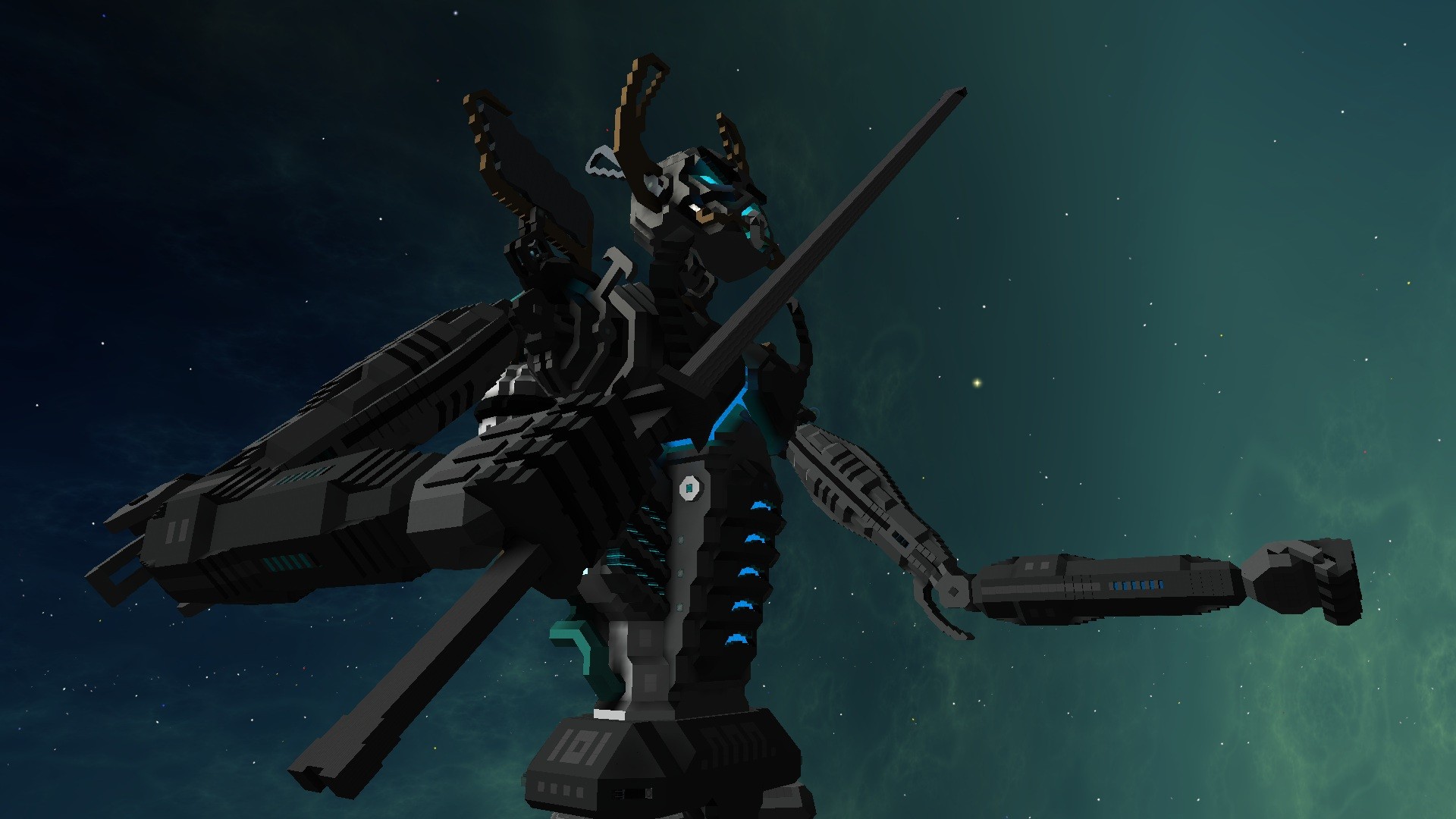 i-i...i have no wods to describe how crazy this idea is. its amazing.

DeepspaceMechanic
Thanks very much, I'm happy to hear that you like it. Although I would say that it wasn't exactly that crazy of an idea to build something like this in StarMade, since I was inspired by other similarly complex (and some much more complex) robot projects that came before this one :)
Hey man, nice work!!!!

Does it have thruster plumes? If not I suggest you add some made out of forcefields that get activated depending on stuff: For example the thrusters drain a certain ammount of power don't they? If power level is below this or that percentage, thruster plume forcefield activate to one third, and if power is fully drained the thruster plume is visible in its whole glory.

DeepspaceMechanic
Thank you, I'm happy to hear that you like this little mech I made!

The jetpack does indeed have exposed thruster blocks at several places, but since the whole thing is oriented downwards, and since the plume mechanic works with exposed thrusters oriented backwards, the plumes generated by the jetpack are totally wrong (but there's a very easy possible fix for this, which I will include in the next update).

I like your forcefield thruster plume suggestion, very clever idea. I like working with forcefields, imitating electric sparks or holograms - might as well try to create some good old cutting torch-like blue flames with them. Basing it on the power level would probably be the best way to do it, I agree. When I'll eventually add this feature, I'll have to include a hotbar-activated flying body posture as well, to make it have a more natural look when flying around.

Thanks again for the review, I appreciate it! :)
Welcome to the Starmade giant robot club. The design and detail work on this is impressive and the logic and rails work great. It looks like Jaaskinal is no longer my only competition in the mech department.

DeepspaceMechanic
Thank you, sensei! - It is a great honor to be accepted into the clan by the Grand Master himself :D


But I wouldn't consider me competition. - Although I put myself properly on the job and am satisfied with how this 21-joint mech turned out, it's still far from the mechatronic complexity you managed to pull off so flawlessly in both of your mechs (if I'm counting correctly; I've seen and tested two of your's).

I actually started construction on my second one a mere six days ago. It will follow a style closer to that of traditional anime mechas than this skinny gray-scale samurai, and will feature one of those pilot rooms where you're basically a glued-in organic component of its mechanical body. Coming soonish.
Good Job !!!