The Order of Bogatyrs

At the moment little going on with no large official faction presence on any servers. However, the OOB Leadership encourages all members to continue with builds and to not lose hope. As soon as EE comes out or we find another suitable server, we will be back in action!
If you have any questions or queries, please feel free to message me via private conversation on the forums or send me a mail at [email protected].

Just continuing to poke around until we get a server to call home. When it rains it pours, eh? lol

We will now be moving to this server.
Pass on the message to all colleagues you see.
Server has almost basic config and no exploiting admins. Is stable, relatively new and quickly growing playerbase. Message me via f4 in-game for invite Bogatyr Mercenary Docks now constructed. Ships to be used only in emergencies and/or to scare off hostile factions.
Governor Appointed to this base is DefMunkey Bogatyr Palace now habitable. Safezone for all faction members and allies in a protected sector. Governor Appointed to this base is Bogdan WAR​
The Order of Bogatyrs is now officially at war with 'Toast King'. Crimes commited are the following:
All offensive actions at 'Toast King' faction now legitimate. Further news will follow soon.

screenshots pls! They are cool to look at

Latest News:
Keras and Akato promoted to Governors! (Congratulations)
Recruited another member to our cause!

Latest War news:
Little activity from our enemies from Toast King and their sympathizers. Organised efforts on multiple fronts seem to have stalled any movements.
Last edited: Nov 20, 2015

PEACE HAS BEEN SIGNED WITH TOAST KING FACTION. Any member who has lost items or property may contact the management bureau or Grand Master Bogdan for compensation.
[DOUBLEPOST=1448208285,1448207815][/DOUBLEPOST]Other News:
Signed an alliance with The East Spacia Company
Reactions: Lecic

I'm curious what happens if another faction attacks both of you and you don't have ships big enough :P

They call me and I grab a torch. Shit this is a real legit faction now.
Okay, now to actually pay attention to what you guys do.

Master_Artificer said:
Shit this is a real legit faction now.
Okay, now to actually pay attention to what you guys do.
Click to expand...

News posted every 1-5day period usually since normally something going on.

Latest News:
Signed an alliance with Magitek Knights
Yet another three members have been enrolled in our cause!
Last edited: Nov 27, 2015 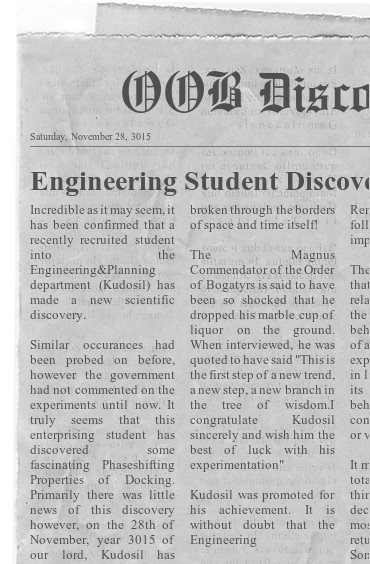 Incredible as it may seem, it has been confirmed that a recently recruited student into the Engineering&Planning department (Kudosil) has made a new scientific discovery.

Similar occurances had been probed on before, however the government had not commented on the experiments until now. It truly seems that this enterprising student has discovered some fascinating Phaseshifting Properties of Docking. Primarily there was little news of this discovery however, on the 28th of November, year 3015 of our lord, Kudosil has broken through the borders of space and time itself!

The Magnus Commendator of the Order of Bogatyrs is said to have been so shocked that he dropped his marble cup of liquor on the ground. When interviewed, he was quoted to have said "This is the first step of a new trend, a new step, a new branch in the tree of wisdom.I congratulate Kudosil sincerely and wish him the best of luck with his experimentation"

Kudosil was promoted for his achievement. It is without doubt that the Engineering&Planning department and the whole Order will wait with anticipation for further discoveries!
Last edited: Nov 28, 2015
You must log in or register to reply here.
Share:
Reddit Pinterest Tumblr WhatsApp Email Link
Top Bottom