*** NOTE!***
Requires StarMade Version .1949
**************
In honor of our up-coming cargo update I present the Andromeda. Andromeda Class is a type of freighter in common use in the Star Trek: TOS era. While never central to the story, Andromeda class transports were regularly used as background or implied in the story.

This is a preview. It was built with the idea of cargo... even though the new cargo system isn't implemented yet. Standing in for cargo space blocks, is purple crystal armor. A quick search/replace should allow you to retrofit the ship when the cargo update is released.

Original:
Includes a crew module for role-play with a bridge, crew berths and medical. 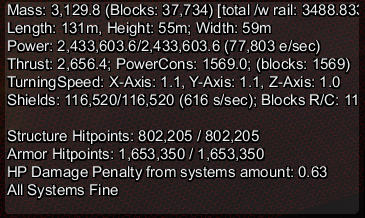