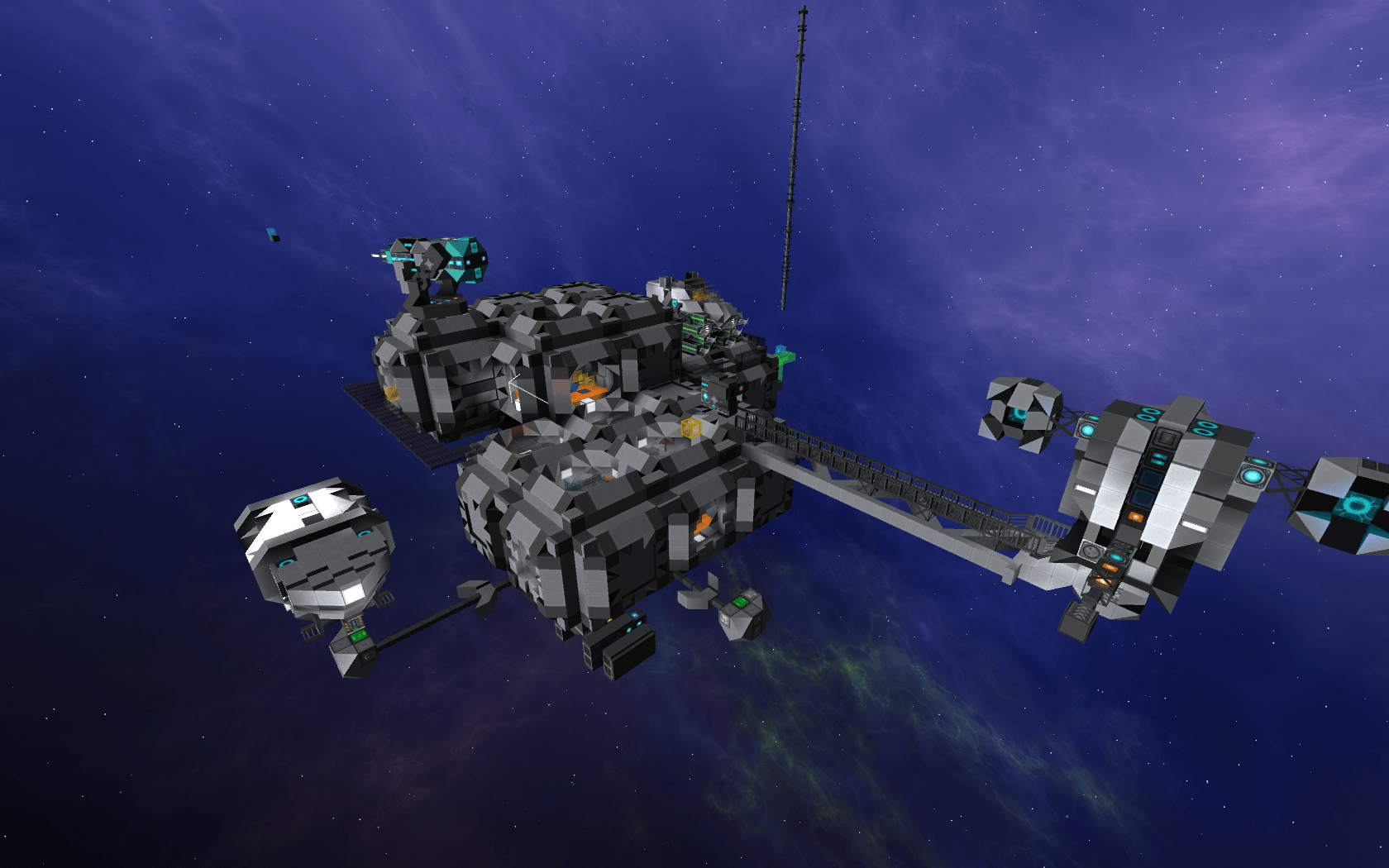 Public Docking Port. Can be moved around as it is docked to a buoy. 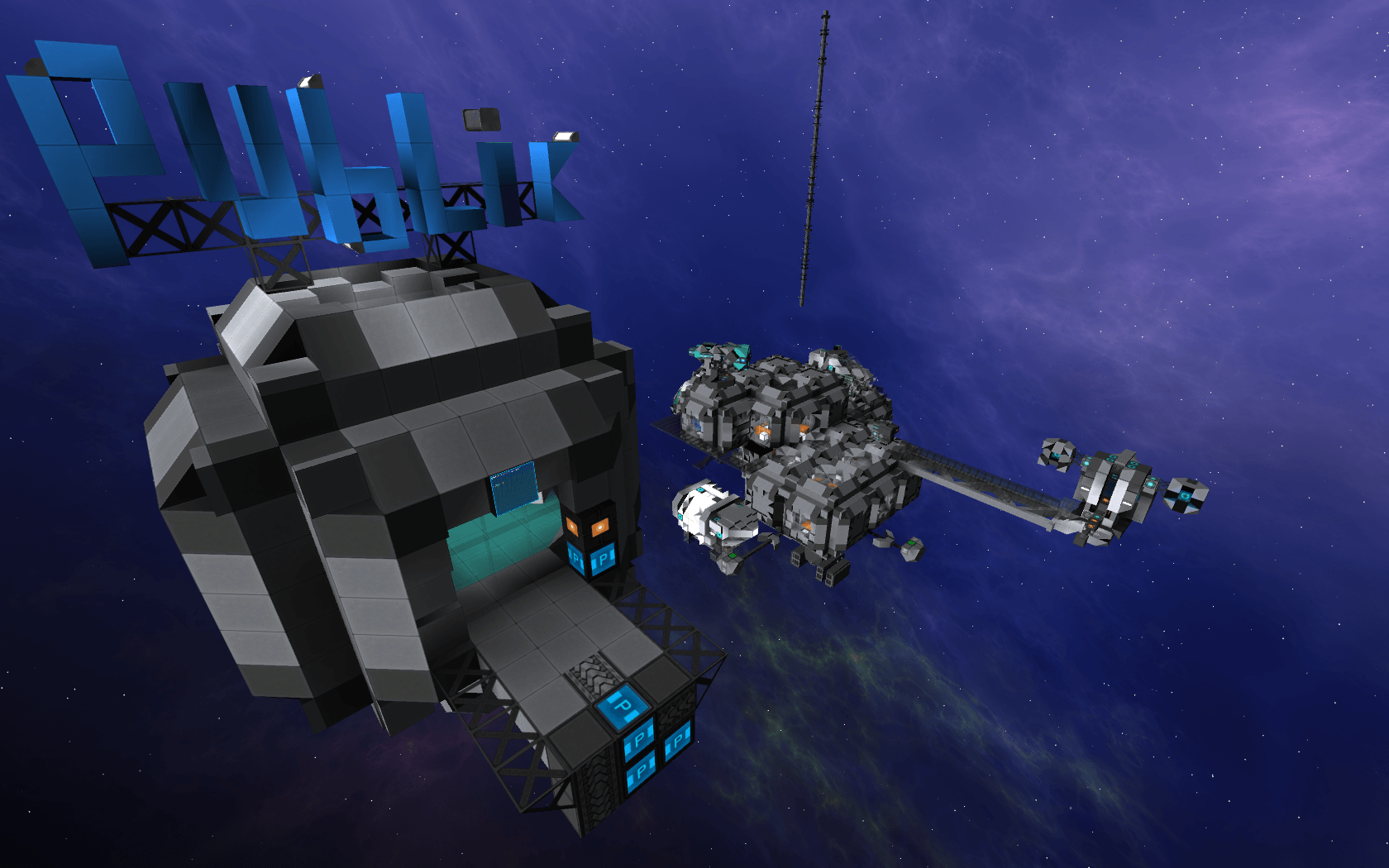 The left ship is my Scout Nioker. 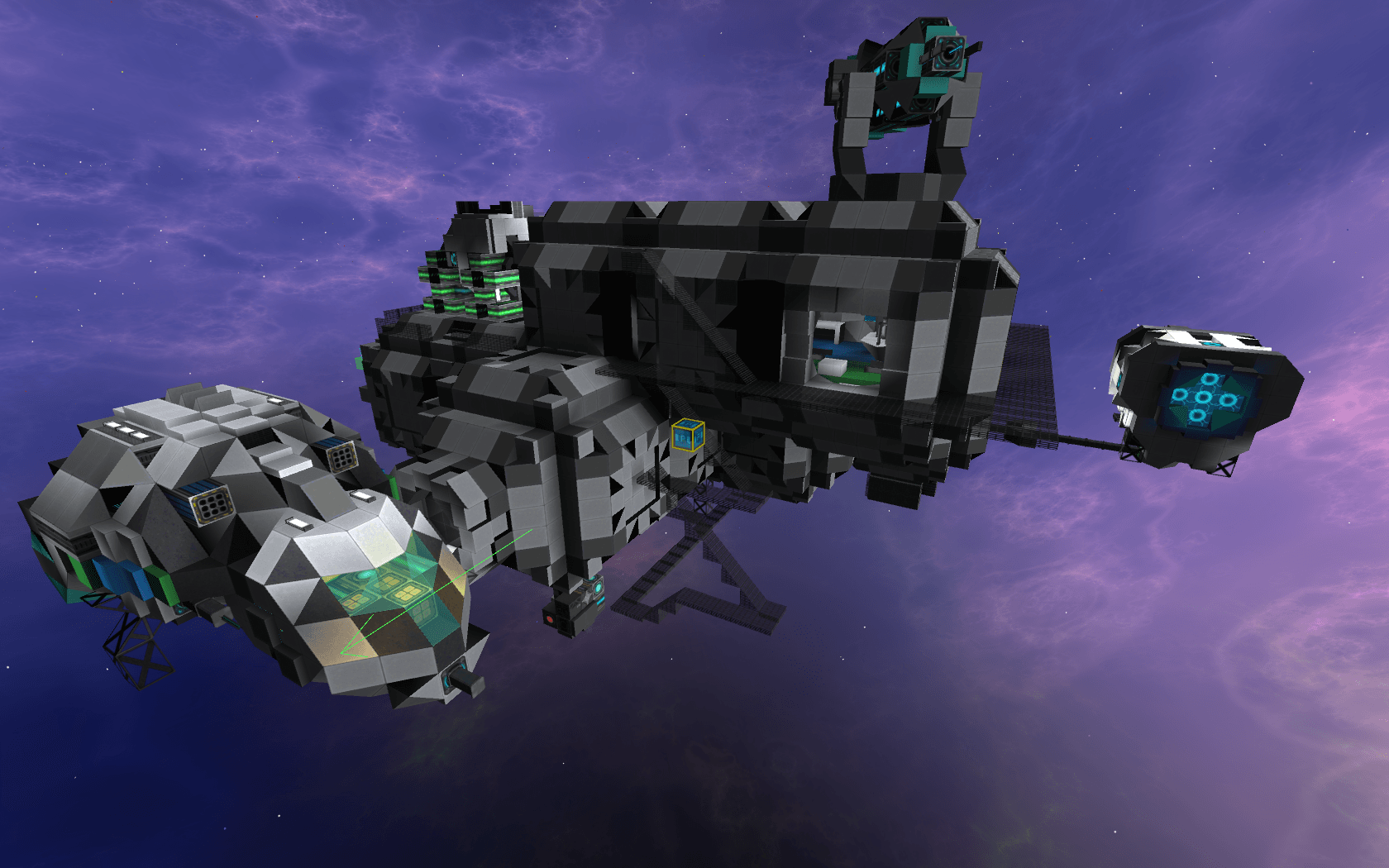 Here you see the opening hangar with the starter vessel Redani in it. 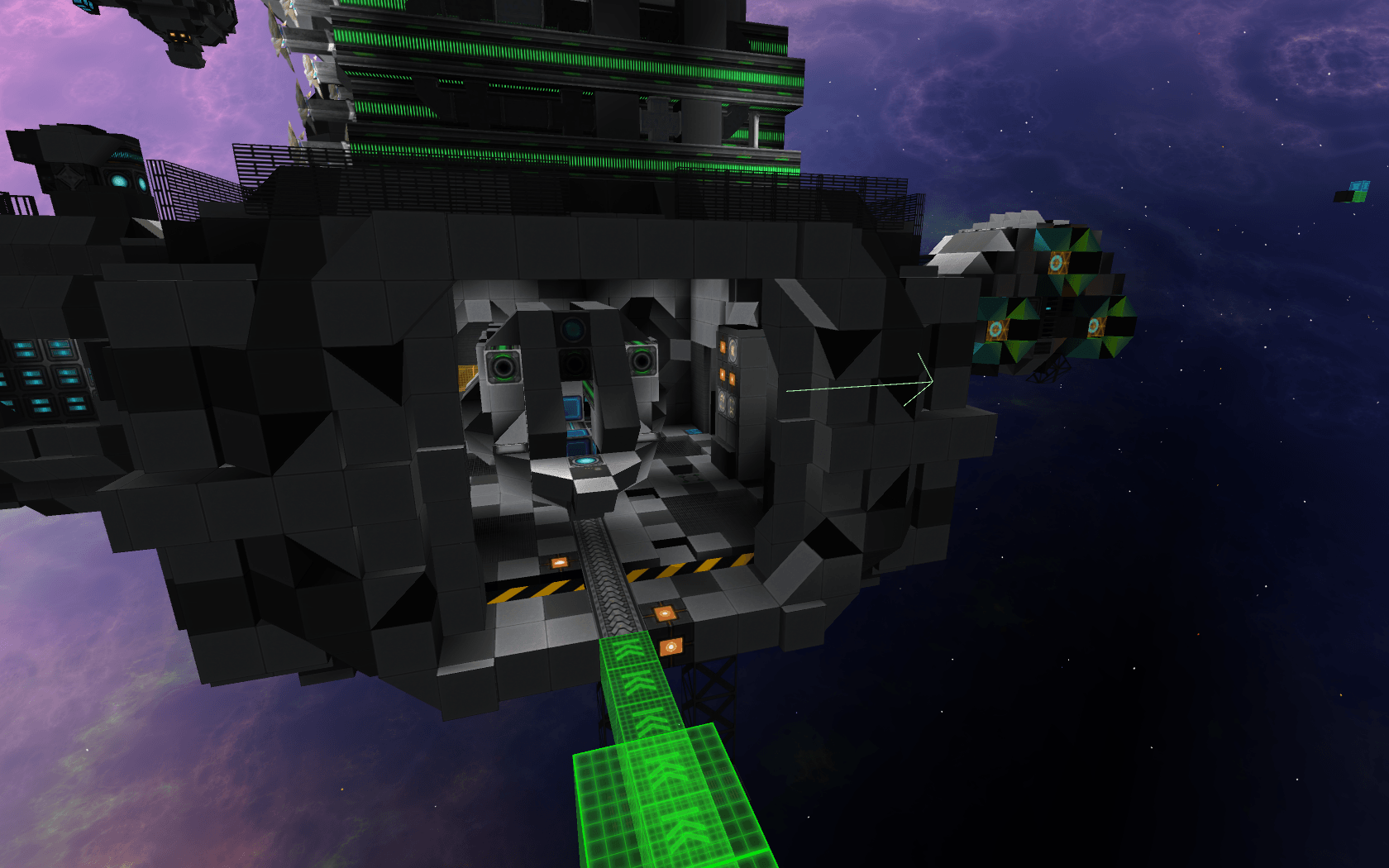 The lower corridor of the station got a small stash to make trading with the network easy: Stuff you put in into the right storage gets drained into the shop cargo. Activating the left activator pulls all the shop cargo into the left shelf's storage, and it gets pulled back into the shop when you deactivate the activator again. 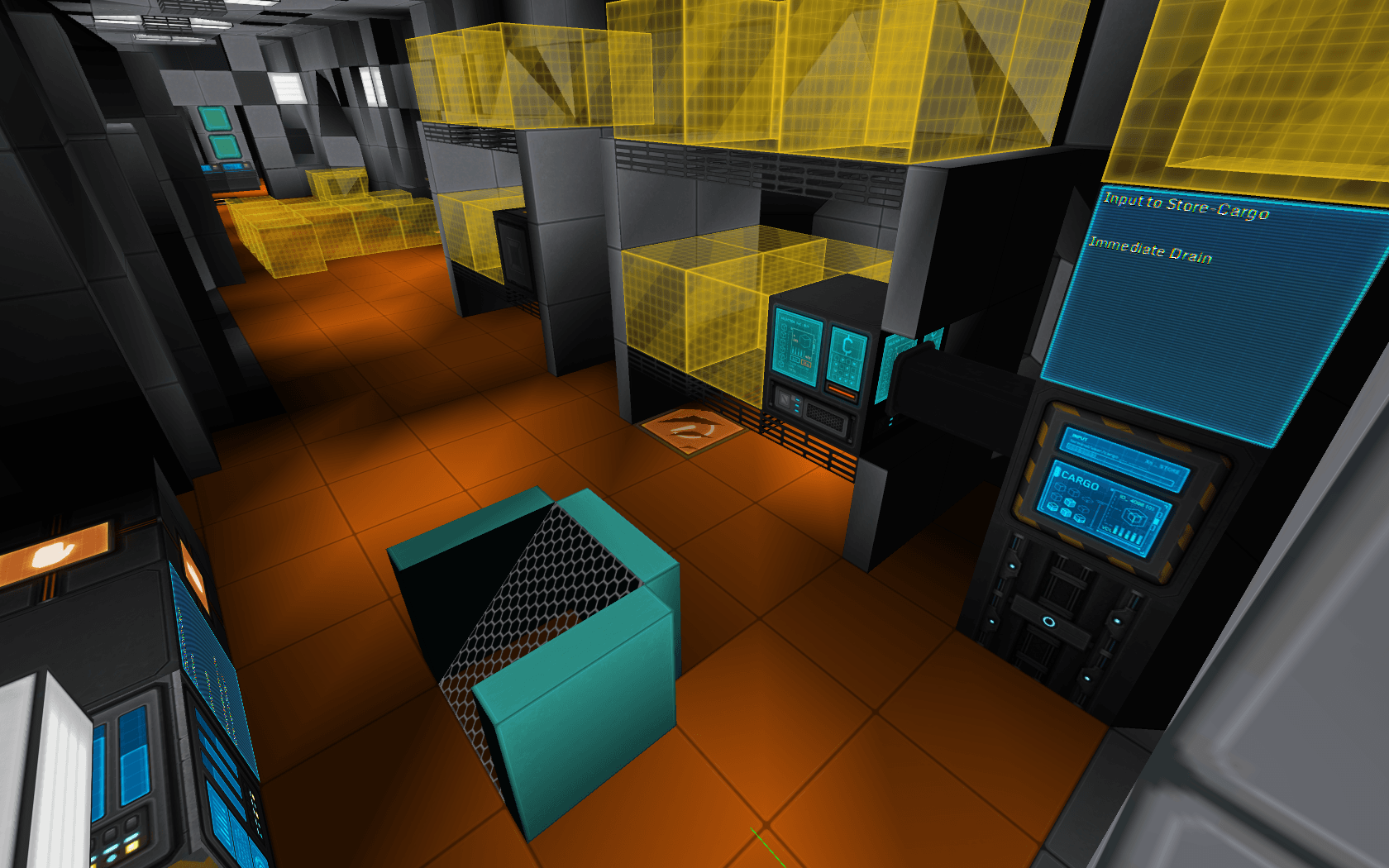 Office: Control buttons are on the left side, left to right: turrets, undock all ships, deactivate door logic. 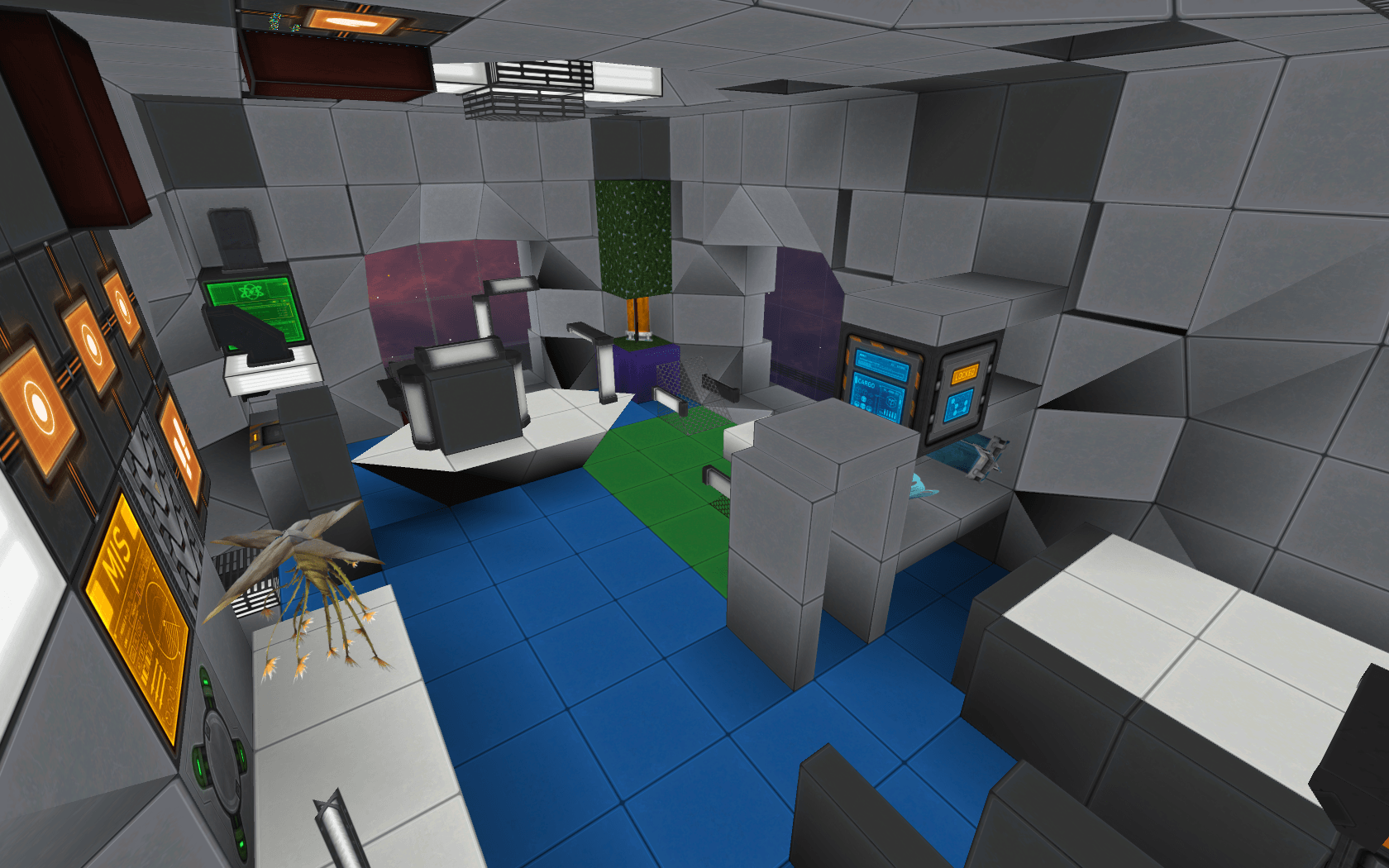 Office again from behind the desk. 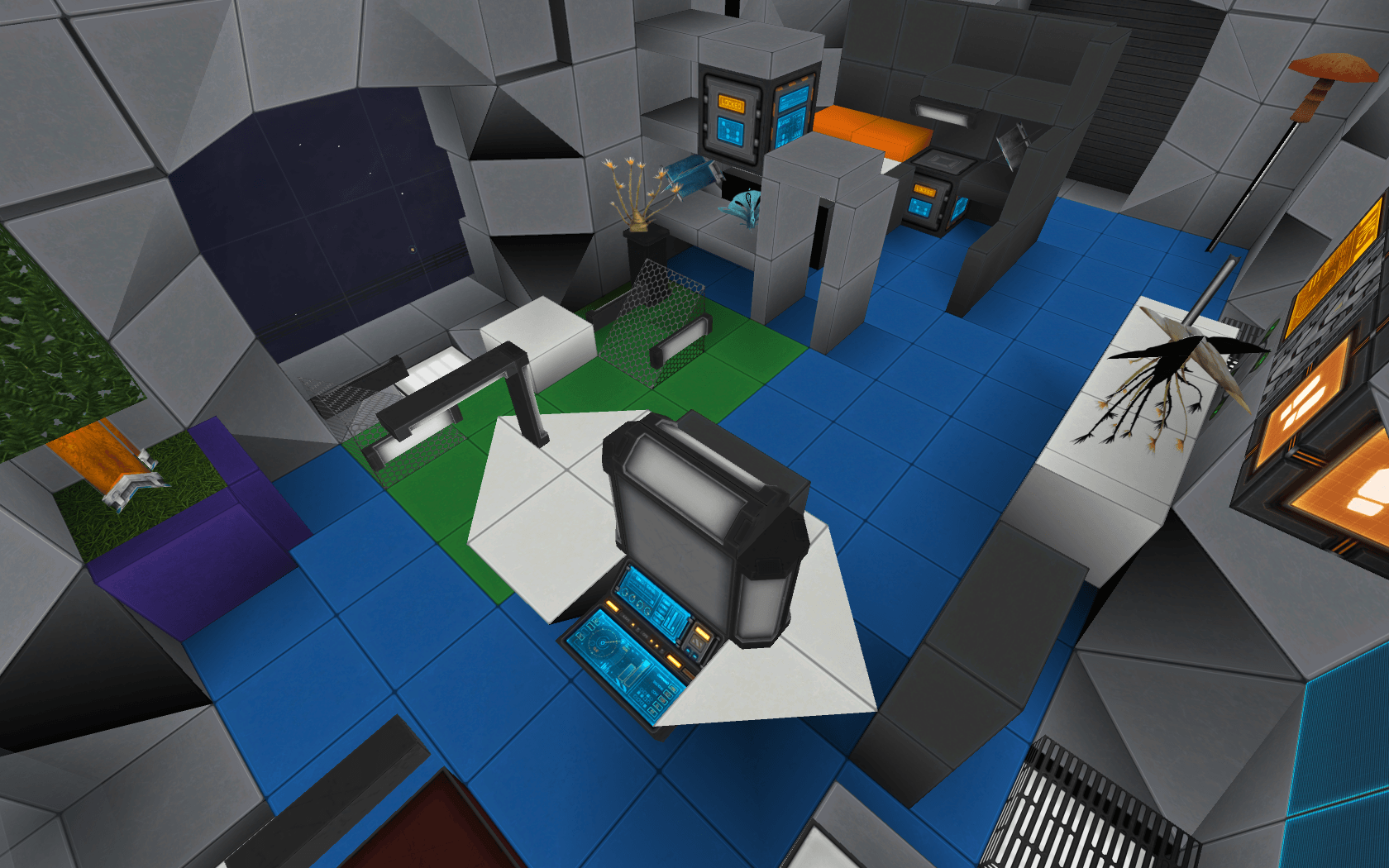 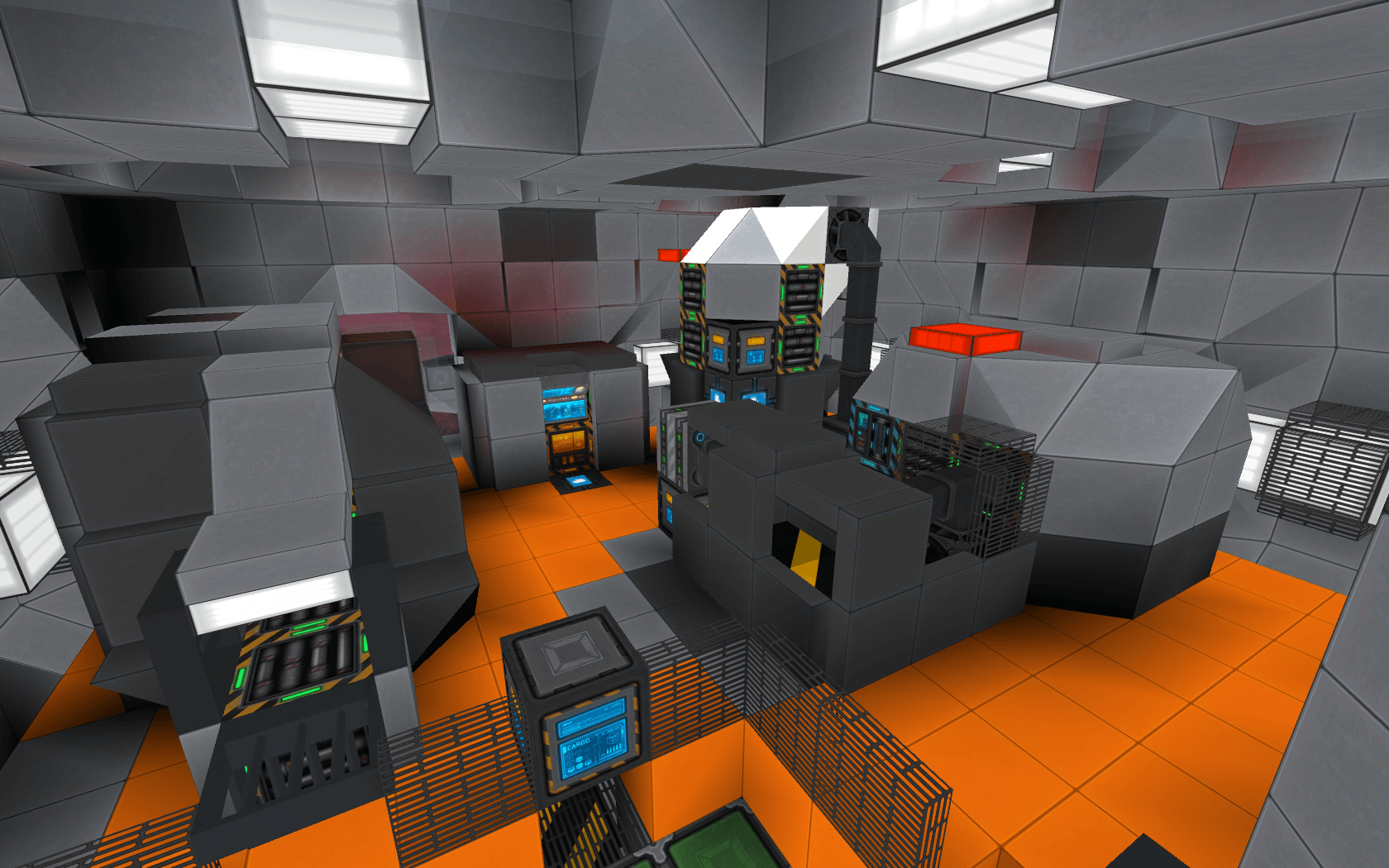 This is the first upload of mine.
This station has a set of 5 small rp ships docked to it.

One idea is, that it's extendable easily: The tiles can be copied and the patterns are easy to clone. Also the elevator can be copied in a way, that you easily can add in new floors with only connecting 2 buttons with each paste. All the outside tiles are 7x7x2 schematics, feel free to copy them and expand the station. If you have trouble with extending the elevator to more levels ask me in my shipyard thread.

The other idea was, to give you all a nice inspiration on what can be done with very small space. If you look closely you will see many interactive things and details, ranging from automated trading setup to a public dock with a logic driven mailbox setup.

I will update it further, but for now it's 99% finished. I also will upload an "light" version with less docked stuff. This other version is for people that want to play right away with the station and want to use it for their own ships.

For questions, critique and feedback your are welcome to write in my shipyard thread (if you don't like to download.: JinMs Survival Progression Diary and some ships

I hope you enjoy it! Best regards.

Ships
Rooms
Living room with office table and control buttons. Access to logic maintenance cellar.
Hangar with many buttons for the rail-moving door and the cycling of un- and docking.
Fabrication Room with cargo storage, connected pull and drain pipes outside.
Improvised shop area in the lower corridor.
Elevator shaft. On rails, with public buttons.
Improvised Reactor part cut off from the lower corridor.
Last edited: Feb 20, 2018
Reactions: klawxx, splatthecat and Macharius

WIP STA Eritrea
for starter refining and production, will have 3 elevators, 6 factories (3x100 basic, 2x100 stand, 1x100adv), and 1999 block reactor.
I plan on uploading it as half finished station, so there will be no interiour, but it will have working factories and elevators and all the neccessary pulls.

SLV Nuka
finished tier 2 starter miner with full jump drives and 210 salv. modules
I just needed a good miner to transition between my 12m long starter tier one miners and my SLV Fedora thats allready 50m long.
I plan on uploading it, but it still has some small flaws.

I can even reach the cockpit from a second entrance via a small backdoor.

The reactor is in its final state, and some thrust is allready in to move around at 150m/s. The only thing thats missing is to construct the turrets and to put in the inner stuff. Feel free to use it for yourself. If you credit me with a display module on the ship or when you reupload it I would be grateful. You dont have to though. At the end this is just freetime stuff and not some company "I make my name here and do networking" work related.

The reactor will be used on the LvD server, and thus has 145% stabilization on their custom config. On vanilla the stabilization is 25%.

I upload this to get some feedback.

The turrets are only visual placeholders. The 3 blue light ones will be cannon-beams, the 2 big side turrets in dark grey will be beam-missile at 9-3. The 2 very small light grey turrets will either be PDT's or maybe also beam-missile.

This is the last version before I put in the systems or construct the turrets.

Its just for reference if people want to check it out.

The whole system is within the green blocks. The other things around the green circle are not related to the Airlock system.

It has some flaws. Sometimes the same button has to be pressed twice. But its spam protected, and resets to a working state if you press the same button often enough. Keep in mind that the inner button between the doors does only work if you activate the activator next to the rail.

Can you beat my logic? I only needed 54 logic blocks in total (not counting non function decorative blocks).

The recent update came with mini-buttons and alot of new micro blocks. Now I am totally into building alot of small things, that I maybe, or maybe not use for my projects one day. I got alot of nice ideas for interiour, furniture and logic parts, and want to share a few of them now. Yeah I post that stuff into the Starmade-Discord, but there it gets forgotten easily.

Sadly I don't play alot on servers anymore. I'm just totally fed up with starting over and over again every 6 months when I come back to the game. It's allways the same: 3 hours grinding to get 100mill credits, standing in front of a shop and buying all blocks (for at least 20 f***ing minutes), queing up 20 more minutes into factories, and then building a station again and again for the server. Then an update comes out and I can't play for 24 hours until the server updates, or I have to revert to an old version and have to wait 15 minutes for that. I just opened a new map and deactivated all station and NPC spawning. Loads within 2 minutes and lets me have creative build mode, and I know that I don't have to fear any server reset.

Have a look on what I did recently:

Concept for a new white corvette, estimated to be around 70 m long.

A walkway template with a 2m by 3m high door.
There are 2 versions of it. One with a little glow in the top left corner. It adds detail - but maybe too much?
If you have a close look, you see that there is a second small walkway above. A maintenance walkway for the aliens to intrude my ship and scare the crew. It is with yellow lights, you don't really notice it on the pictures. But the yellow lights are placed on purpose with a distance to the lower corridor, so that they only give exactly the amount of color to the the celeing, that I want.

How the lighting in the ceiling works:

I did not change alot to the outer hull of my fighter Aprunner, but let me share a live action shot. I really like how it turned out. Right now I only need to rework the systems (power changed again). After that I will upload the finished version.

My little brother doesn't like the blue sides. He thinks I should cut half of the outer circles then it would look cool. lol

Finally I worked on "construction site stockpiles". They are ships where I aim to place building parts and furniture on them, that I then can use for future projects. The plain construction stockpiles are fitted with a small cockpit like you know them from excavators. They have a small reactor and thrust so I can easily move them into my hangars of my station that I like to add parts to:

TMPL Construction Stockpile Helix Buidling - finished and ready to use for building a nice sky scrapper.

New builds from me
Two new CC uploads from me! Booth ships are the same but different. Hehe.

We are talking about my Starter Exploration Vessel, in the light and regular version.

You can modify these two ships as you please and you can upload your design to the CC, maybe you come up with some better design than me. If you put a link back to my original upload I would be happy.

The main reason I built this ships is, that I wanted some new and fancy survival starter exploration and mining starship for servers. The new update hit two days ago and I wanted to start playing again. So I designed the light version first, and used it go find myself a new home on Skies of Eden. After that I improved the small tin can to make it actually bearable for myself. That improved version is quite nice for myself, but obviously I got some critique on it already for being still too grey. I understand it and maybe I am in the mood to further modify it. But for my own usage I am totally pleased with the regular version. Just the power setup in comparission with the mining and ftl power drain is bad. I am just not sure if I really want to fix that part, because in every small full roleplay build it's kinda the weak spot.

My own survival challenge
Last but not least I wrote a small challenge for myelf, to improve my survival experience. It's quite one page of a letter, so I am not sure if it's worth sharing in this scetch state. Still I am happy with it, it gives me something to do. Basically it regulates when and how many hangars I build, and how many vessel of each type I posses. Stage two has 2 hangars and a strike force of 3 ships ready to use, stage four has like 6 or more hangars including a trading spot. Trading for credits with other players is not allowed, only against blocks or constructed objects including interiour partss. And so on. If I ever manage to polish it, or if someone is interested into it, feel free to ask, I am happy to share it.

After completing my Starter Exploration and Mining Vessel "SLV Denuvo", I think it's time to make a comparission shot.

I completed the first version at 2. February 2020, after starting to play Starmade with the new update again. The in between version "second version" was finished 12 hours later. To complete the ship it took me 10 additional hours distributed over one week. Today, on February the 8th I would say it is done.

As you see, it took me only one day, around 6 hours, to completely work out the outer hull shape in grey, and to lay out the inner rooms. It took me tripple the time, around 10 or 15 hours, to figure out all the details, coloring, logic setup, and to clean up all mistakes.

And this for a ship of a small size of 19x15x29 m.
Stats of the finished construction:

Putting in that auto mining logic

got my auto-mining feature done, now pilots can c-v a button to the salvage computer if they desire to afk mine

I think this really helps if you just write what a new pilot has to do to make the ship work. I will not have the salvage computer connect to the auto mining logic at start, so new pilots can decide if they want to use the feature. Its confusing to dont see the salvage computer in the weapons list, if the Inner Ship Remote looses it's contents and just has written "no text".

its not a mess but new players will not be able to understand or modify whats going on. for me it would be barely comprehensible whats going on if I come back 6 weeks later

and I finally managed to have no visible logic pipes throughout the ship :D
Last edited: Feb 13, 2020
Reactions: DukeofRealms and Tsnonak