I simply suggest adding Ring Worlds to the game. First, I'll post an example of what I mean, then my explanation of how they would add to the game, and lastly, how I believe they can be easily implemented given the current state of the game. 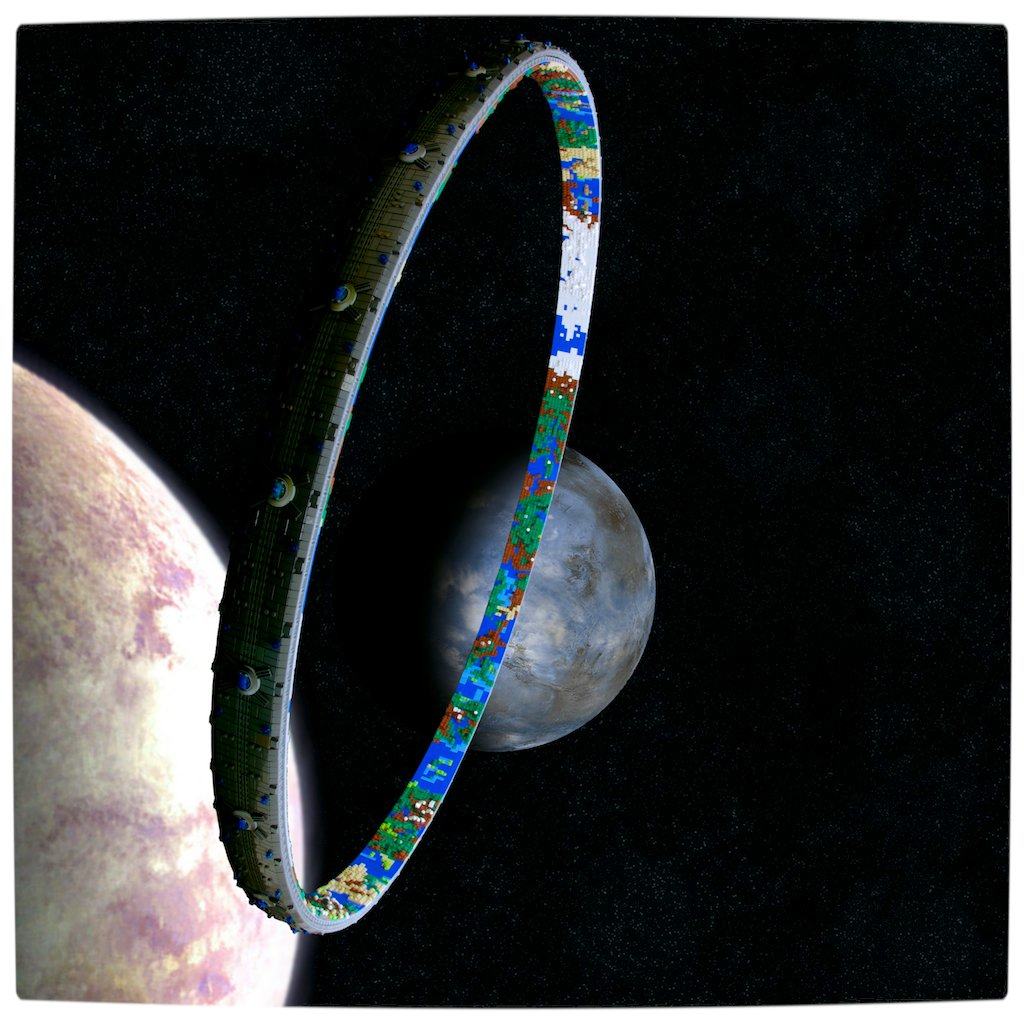 (Some lego ring world, I don't really know where it came from, but I wanted to show a ring world that did not enclose a sun.)

(Another example of a smaller ring, not enclosing a sun.) 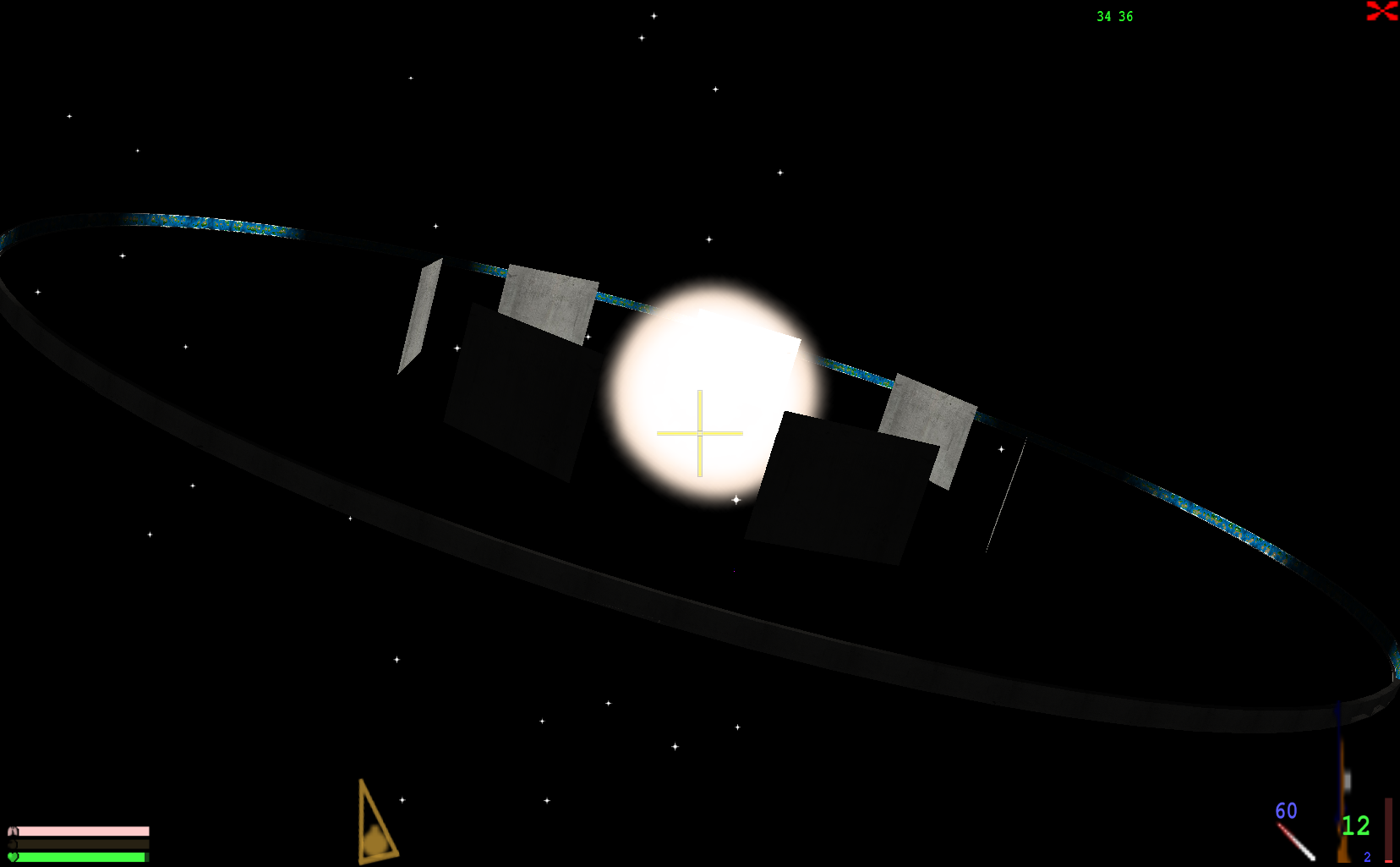 (My least favorite example, from a game called Shores of Hazeron. The Ring is extremely large, and represents its own orbit of the sun. Massive blocks that revolve create shades that simulate day and night in swathes on the surface of the ring. The traditional model of this just uses big shades for this, but for some reason Hazeron's looks like giant concrete blocks...)

Now, as for what these things would add to StarMade, I believe that if these were a very rare planet type, discovering one would be enormous news for an entire server, let alone within the faction who found it. My only guess is that the world could simply be cool, but if Schine ever wanted to add super rare materials to the game, the Ring World would be the place to stick it. There would be some kind of artificial reason for a Faction to decide, "Okay, we're moving our capitol to this Ring World."

As for how it would work, I think it'd actually be extremely simple given the architecture that we already have; the planets we have now are made up of plates that surround an artificial core object. Imagine a ring world simply being those same plates, rearranged. Rectangle shaped (for simplistic example), turned around backwards, and angled together to make a ring! The plates have their own gravity and pull things 'down' onto it (the appearance of outward), and that's it!

And, I should mention as well that I do not really suggest making sun-enclosing rings, because of how the sector system works in the first place. I think that a ring world, in my mind, would only ever need to be the size of a large usual planet.

Also, for sake of detail if anyone is curious, if the satellite ring world (which does not enclose the sun) is pitched at the correct angle, one side of the ring will shade the other side from the sun, giving it day/night as it spins.
Reactions: EricBlank, aceface, AssIn9 and 3 others

This could certainly be an interesting and creative addition to the game, with many opportunities for RP and possibly new resources like you said, but whether such a construct is possible given that current planets already lag servers out massively, I don't know. Still, I like the idea, and the creative possibilities that would come with it. I would certainly relocate my capital to a ring world, purely because its cool

sorry TartarusMkII , i was wrong earlier in chat, that's not sabar, but skylord :P
check this out !!!

You can build one yourself- we've got the rails and logic to make a ring with gravity and everything. The one Gamel showed is definitely cool, but I don't believe it has ring-wide gravity.

Just FYI, the proper term for this is a Dyson Ring, while a complete 360 degree shell is a Dyson Sphere.

Lecic said:
You can build one yourself- we've got the rails and logic to make a ring with gravity and everything. The one Gamel showed is definitely cool, but I don't believe it has ring-wide gravity.
Click to expand...

What is the smallest angle change you can make with rail rotators? That will determine whether that idea will really work well or not.

Valiant70 said:
What is the smallest angle change you can make with rail rotators? That will determine whether that idea will really work well or not.
Click to expand...

Edymnion said:
Just FYI, the proper term for this is a Dyson Ring, while a complete 360 degree shell is a Dyson Sphere.
Click to expand...

Technically that only applies to constructs that enclose or encircle a star.

Lidren said:
Technically that only applies to constructs that enclose or encircle a star.
Click to expand...

Right, if I were to add this to the game, I would NOT add a Dyson ring. I would add a small planet-sized or moon-sized ring.

Also, I know a lot of players who play this game do so for creative purposes, but my post is made in mind of the gameplay. I can make a ring, yes, but my goal is to have rings in the game that can be discovered- as natural objects.

Planets might be laggy as of right now, but in my mind, from what I know of the code, the ring configuration should be either just as laggy ,or slightly less due to it not needing an animated core object (though it would probably still need a core, just an invisible one, or something.)

if it can be added maybe it can pawn around planets

Ribbons0121R121 said:
if it can be added maybe it can pawn around planets
Click to expand...

i have come to revive it again
because im a completionist and i want t done
You must log in or register to reply here.
Share:
Reddit Pinterest Tumblr WhatsApp Email Link
Top Bottom