This is the third universe update dump copied from our official Discord server, in the channel #universe-update-dev-news-dump. To receive universe update news as it happens, join our Discord channel here: Join the StarMade Discord Server!

Between the dates of the 21st of October - 29th, the following was done:


--- Below is the more detailed discord posts about development done ---

The integration of the settings redesign is still in progress. Still gotta adapt a good chunk of settings references. Payoff is a much cleaner code, as well as a slightly faster access to settings, as well as a ton more versatility (settings can be any type now)
This of course will mean that all settings will reset when the update hits, but they would anyways. old settings.cfg files will not be compatible, server.cfg will be compatible however (even though it now runs on the new system)

Not much news. Still adapting the code. SHould be done with that today or tomorrow

Had to switch to a different IDE, as my current one keeps freezing on a class.

Once i adapted it, it was all fine again

updating the setting system made it a lot easier to handle the GUI scaling. This is the gui scaled for 4k (in 2k resolution, so it looks a bit oversized). There is also a scaling in between. 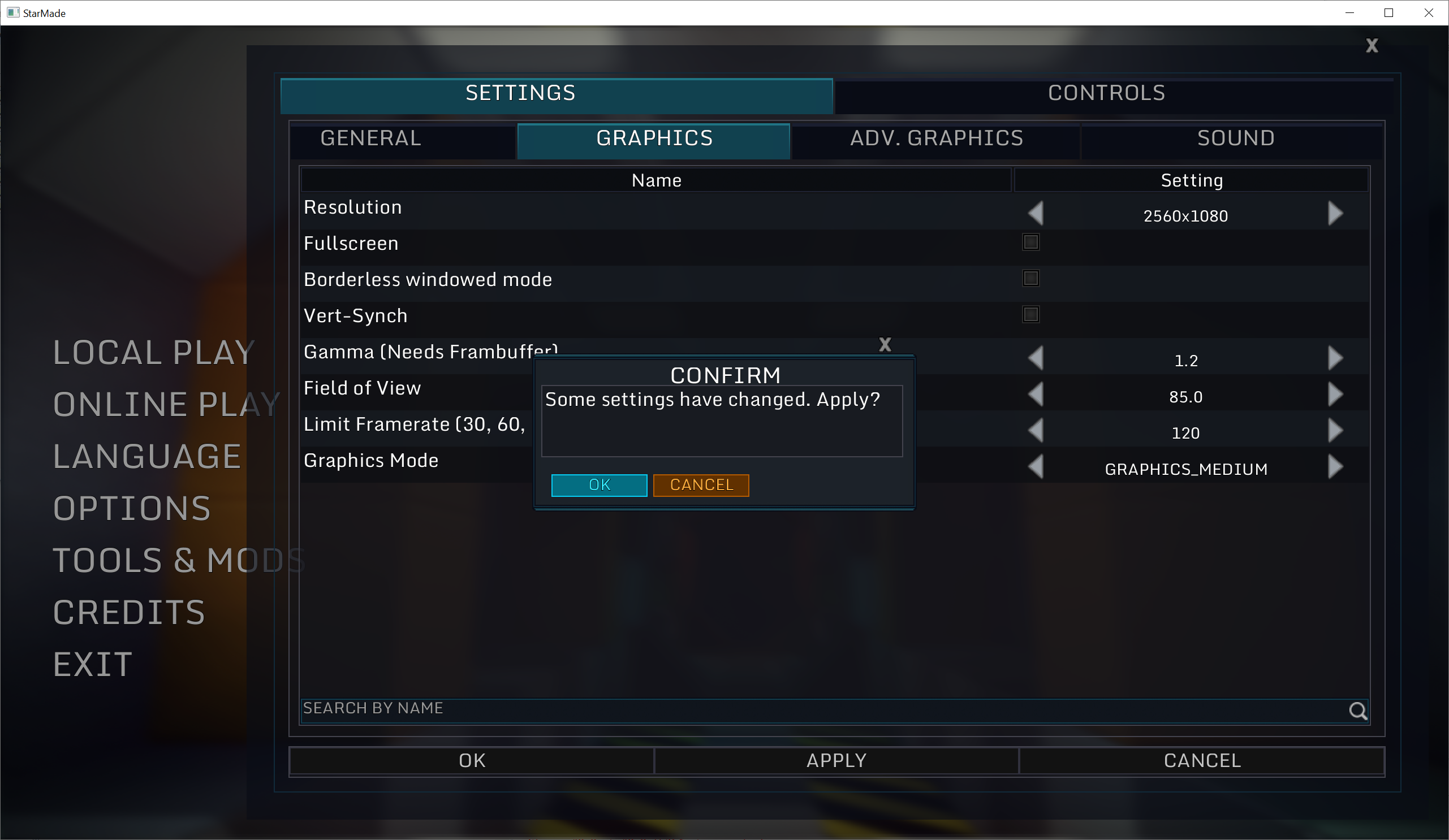 Just spent about 3 hours on a bug involving clip areas checking in drop down menus. The problem was that the newly integrated graphics framework GLFW uses mouse Y positions counting from the top of the screen while the old lwjgl counted from the bottom.

Good results though. Now got nice drop downs and sliders in the options instead of having to click though every single selection. 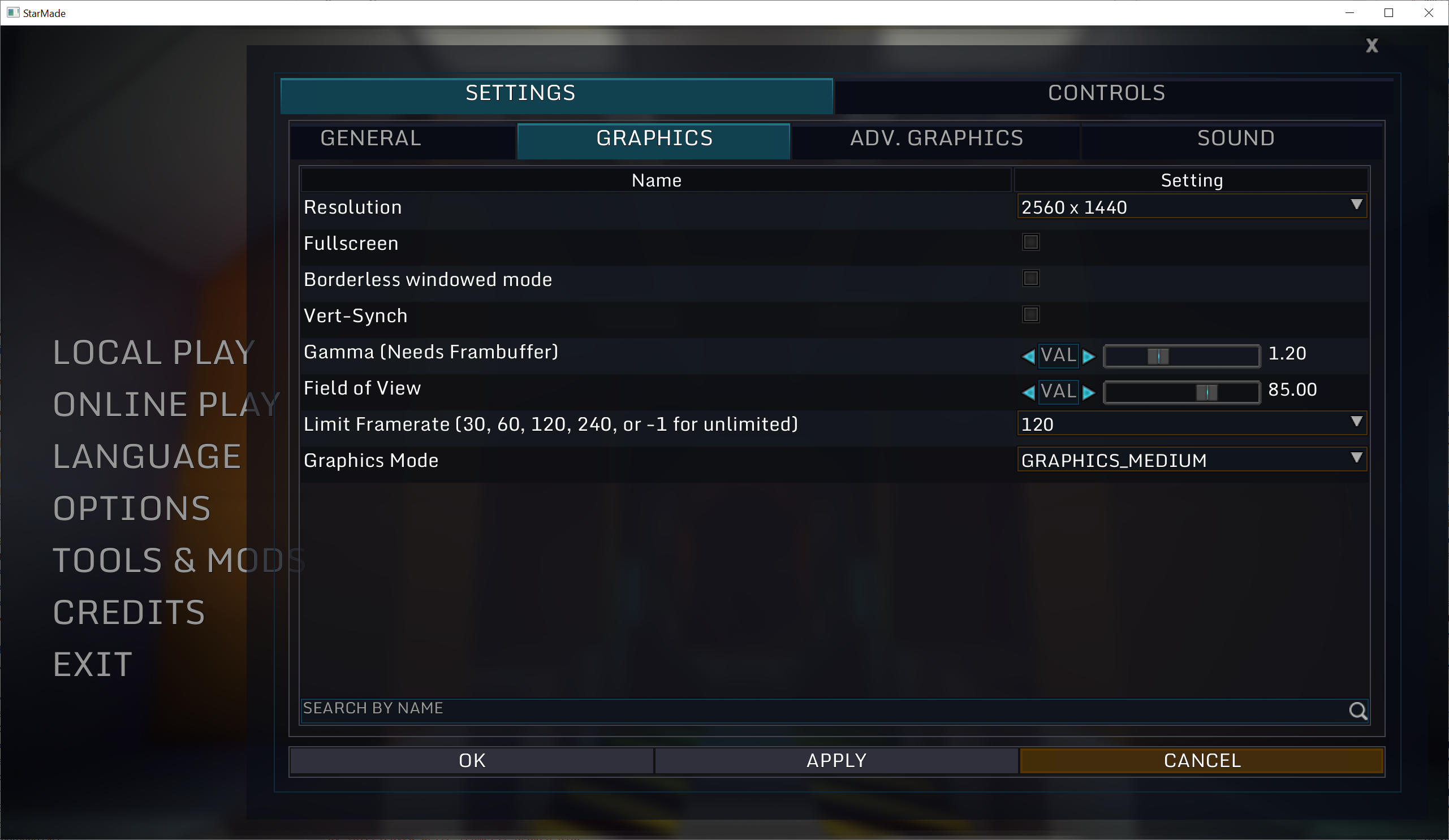 (which was basically the requirement for the audio settings, so now i can include the audio mixer into the settings) 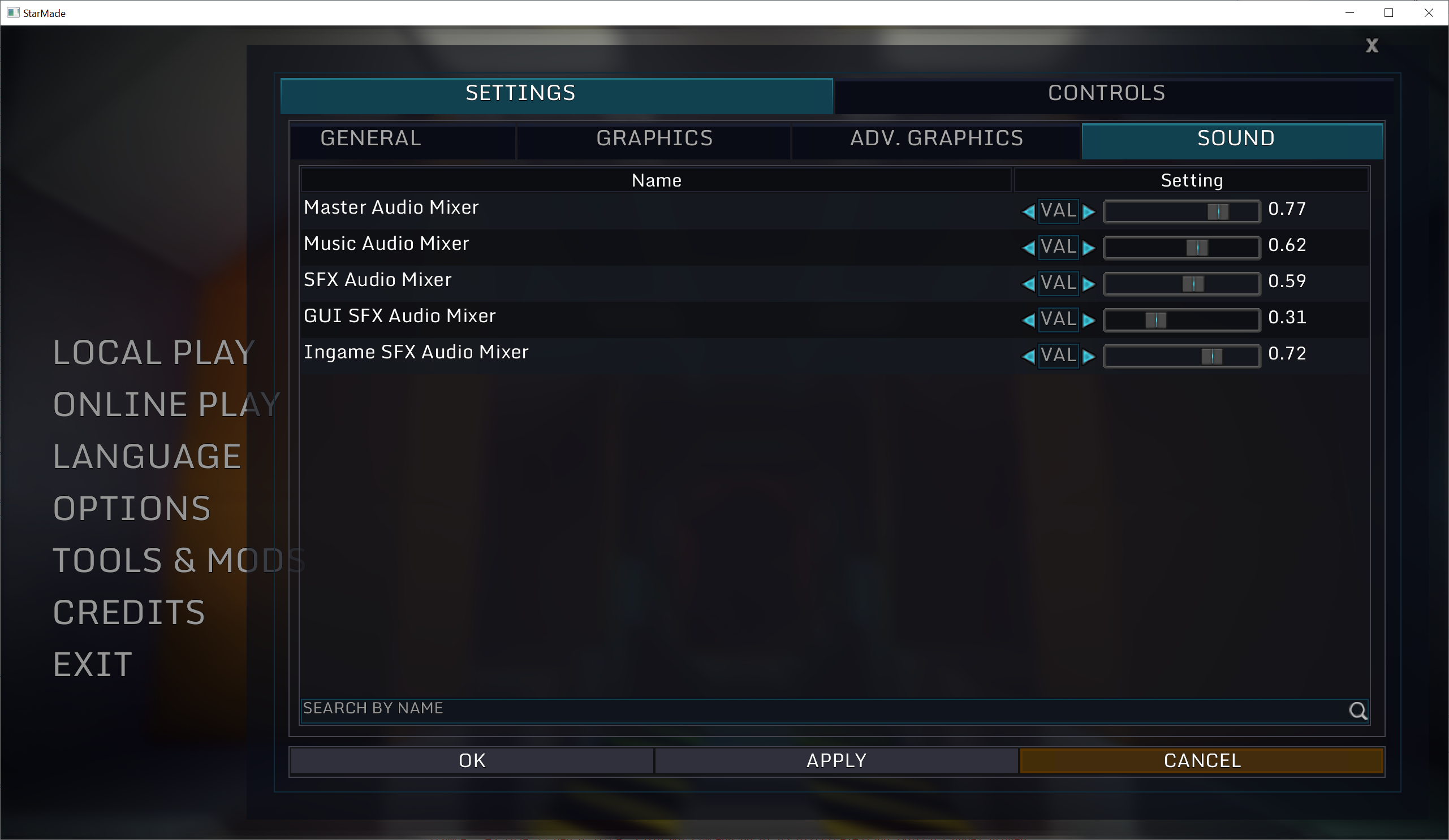 the new audio settings. I split up SFX into sub mixers for GUI and ingame (engines, explosions etc) (to have more control over audio)

Refactored and modernized the resource loader (for audio, images, meshes, textures, etc). Much more modularized, and robust.
Implemented the last steps for the audio mixers and successfully assigned the first few sounds and it works as intended ingame.
Only thing left is to test out the more complex sounds ingame as well as remotely triggered sounds.

Remote audio events are now implemented (Server can send audio events. Those events are only sent to players in range of the actual source of the audio (with the option to send it globally, although it probably isn't needed since global event usually have a trigger on the clients anyways, so it can just fire directly).
This saves on bandwidth, and removes a possible source of bugs (sounds from distant parts in the universe playing).

This pretty much concludes the implementation of the sound system (minus possible bugs and actually assigning sounds for all the events. Assigning can be done by anyone (which was the goal here))
Reactions: Dire Venom, Agame3, 0ldSkull and 5 others

Many thanks for opening up the spread of information beyond just Discord and live streams, even with the considerable time lag. Much appreciated.
Reactions: jayman38, DeepspaceMechanic and Tsnonak

When you say "Overhaul of the individual block system. Putting all block variants into a better structure..." what do you mean? As it currently is now, adding new elements is extremely difficult through code, will these changes be done to simplify the process?

Based on the plan given for the universe update, phase 2 started being worked on about a month ago. Which is suppose to be the most work to do correct?

Good to hear progress is being made!

Jeryia said:
I'm asking as, it sounds like we're a very long way from getting a universe update, likely not even next year.
Click to expand...

Not sure when schema will finish the universe update. However, he is aiming to have a dev build out with new planets in December or January.
Reactions: DeepspaceMechanic

Jeryia said:
Based on the plan given for the universe update, phase 2 started being worked on about a month ago. Which is suppose to be the most work to do correct?

Good to hear progress is being made!
Click to expand...

Pretty sure that the "phase" plan is not being followed. He just started some stuff that would be in phase 3, while having just finished some phase 1 stuff.
Reactions: DeepspaceMechanic

WIll this help fix make the game less silent? I'm particularly thinking of the fact that when you're under attack it can be hard to notice.

I guess the main question is are there planned 'events' for the universe update to make use of this new sound system?
You must log in or register to reply here.
Share:
Reddit Pinterest Tumblr WhatsApp Email Link
Top Bottom