So I guess, that we only have one stabilizer, because it can't be calculated in realtime.

Now here is my idea on how to easily compute it:

We can have up to 6 groups. Each group lessens the distance needed to the reactor.

Now each group does not work, if one block of it is too close to the reactor. If a ship gets damaged, and one group looses strength, we can't add aditional stabilizers, until we resetted the ship. (Or a quick reset, if we didn't take damage to shields for the last 5 minutes). This is not realtime for a fight anymore, and only realtime when we build the ship.

Now the relational distance maths:
We don't compute for each block the additional stabilization, we only compute for the block closest to the reactor. His stabilization strength then gets calculated by all the stabilizers that are physically connected to a touching block to him (called group).

The block closest to the reactor is also the anchor point to compute the distance to the other 5 stabilizer groups and the reactor.

Now we only have to compute the distance of 6 blocks and one reactor "bubble" relative to each other. Instead of all stabilizer blocks that exist on the ship.

e.g add in low effcincey zones around the groups so they have to be spread appart.

Maybe you could only have 6 active stabilizor groups at a time, the rest are deactivated (like multiple reactors). Only the largest 6 groups are used. 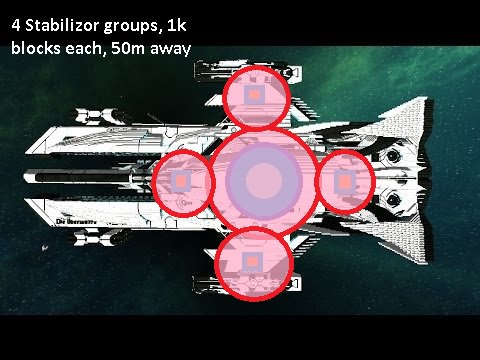